I did a little grayscale test engrave the other night. It was a single pass, but it’s a good example of the kind of relief you can get out of the GF. Doing a second pass should be close to multiplying the depth by 2.

Edit: this was done on proofgrade maple ply at default dark settings. 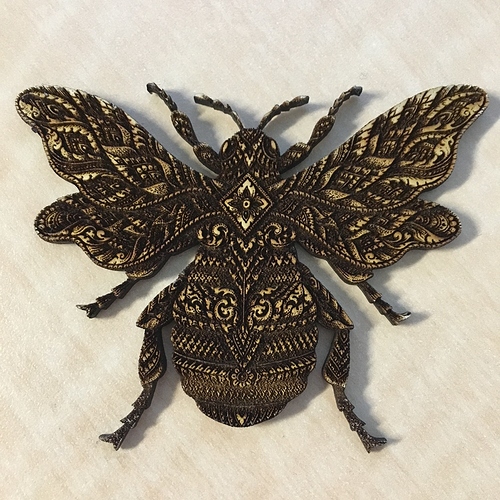 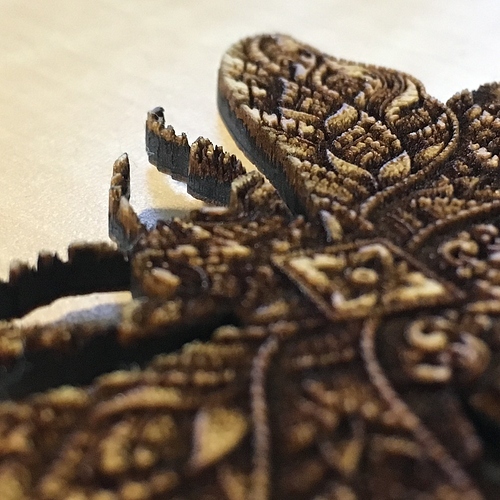 No bananas, but library card for scale: 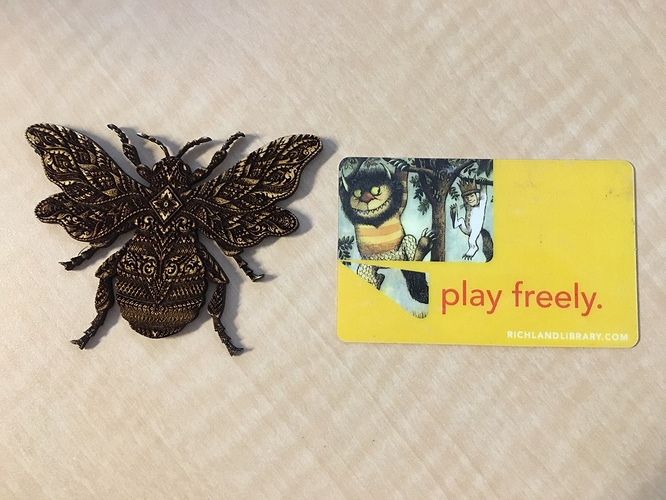 This is stunning and the reason so many Chinese laser owners are so worried.

Can I just say wow wow wow - that is amazingly detailed!

Did you make the file that produced that??? If so, you deserve another round of applause.

Wow. That’s fantastic. The detail on the antennae and the legs is impressive, and the engraving really pops. The longer I look at it the more cool stuff I notice in the engraving.

This is stunning and the reason so many Chinese laser owners are so worried.

While I agree it’s great work, I don’t believe there are a lot of Chinese laser owners who are worried about the GF. You have a couple of levels of Chinese lasers - the really cheap ones (<$500 or so) and the expensive ones that are more in the line with the GF. The first group isn’t going to spend $3000 or $5000 on a laser that does what they can do now (or even some things they can’t - while also losing something like rotary engraving) for 10X the money.

The second group has the money but the GF isn’t the same standout improvement for them. The software is generally a fair amount better than the K40 types and the bed and tube power is radically higher. For the price of a GF Pro I can get a 120W with a 3x4’ bed, Z-axis adjustability and rotary engraving capability. I couldn’t do one-pass 3-D engraving but I could mimic it fairly well with a multi-pass approach. So if I already own one of those beasts, why would I be bothered by a machine that can’t handle the material sizes I would now be used to handling? The workflow benefits wouldn’t be compelling because I’d already have gotten used to them.

I don’t think you’d find many Chinese laser owners who are worried about the GF, just jealous maybe of some of what it can do.

I can’t find the right grammatical term for how impressed I am. How in the world did you get the antenna and front legs to not break when you extracted them or handled the final product?! This is one pass??? I so want my GF now.

I’m always amazed with the detail, especially relative to size, of the projects you post.

Wow! That would make a gorgeous brooch!

seriously impressed and itching to try this out for myself (someday)

Could you do the same thing with perspex?
I’d love to see what that would look like.

This is a gorgeous design, in addition to the engrave quality, nice work!

Amazing little test, you pick some of the neatest artwork.

Sniff. I’m gonna have to stop looking at your posts. They make me SO green with envy! Seriously, a fantastic example.

The detail and the depth control (seriously deep next to not-deep-at-all) are really amazing to look at.

Oh I wish, but sadly no. I went to school for classical art, but as soon as I was able to create on a computer it took away all the pain points I had in my personal creation process, so I never really looked back.

This is one of the last ‘real’ drawings I ever did. I think it was from the end of high school. (pardon the flash, my dad took this lol) 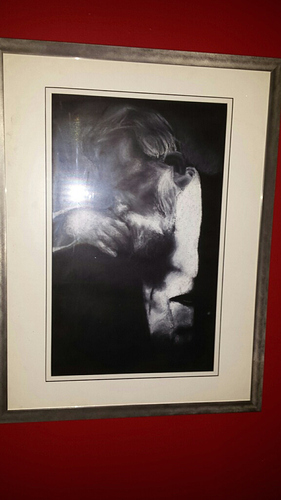 I was always incredibly slow at drawing, just not enough time these days =P.