Made these guys last night. Wanted to make sure the settings were good before doing them bigger as presents. I think they turned out well for being 2" & 3.5" 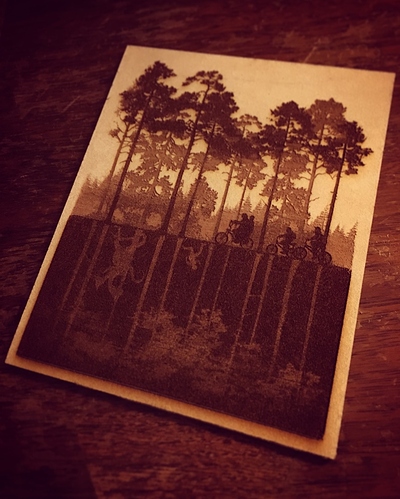 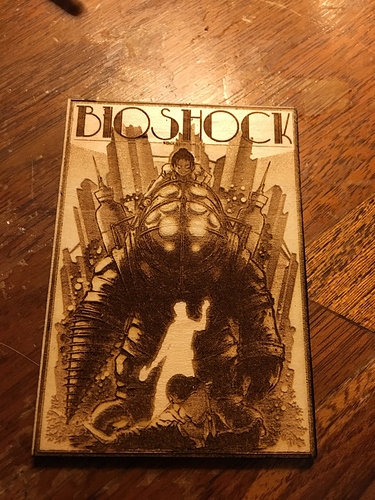 The different layers of shading are looking great.
Thanks for posting these.

It is amazing the illustrations that you have transferred to engravings.

That BioShock piece is making me extra jealous. They turned out great!

That one is 2" wide. Crazy how much gets packed in the small spaces

What?! I was imagining it much larger. I’m doubly impressed.

Edit: Also just seeing that you called out the size in the original post. I was too enamored with the pictures to read.

You didn’t miss anything. I edited it =). I’m going to do a larger bio shock soon

Is that original Stranger Things art?

Is that original Stranger Things art?

When I pulled the trigger on the

I was thinking of things, boxes and all with maybe a little visual upgrade. Seeing what it can do I’m going to have to up my game! @takitus you continue to inspire. As badly as I am wanting one I have to admit that Dan and crew have done a very good job at picking people for betas and now pre-release units.

I love seeing how the engrave depths really do translate into darker/lighter shades. The drill and city in the bioshock image make me think of Big Bertha here in Seattle.

Just to see the quality of those images and think of everything I will be able to do with my Glowforge, it makes me happy

Do you sleep?.. Another great project. Are you able to see total run time for the machine anywhere? As in lifetime counter.

No time to sleep! haha. I was doing a raid array upgrade/rebuild last night, so had some stuff for the burninator to chew on while I was taking care of that.

Dang, love Bioshock. And I too thought it was more poster sized.
Now do Shodan from Systemshock ;D

stuff for the burninator

Now you’re talking my language. I was actually thinking of naming mine The Burninator

this isnt the name youre looking for… move along…