Hello. As someone who can’t really draw (at least quickly), I LOVE the premium art for quick projects. But I’ve had several instances of them not being properly welded(?) for engraving for things that definitely look like they are meant for engraving, and it’s really hard to see in the app. As an example, I was delighted to find this horse as a suitable kelpie for my kids, but when I printed you can see at every join it has not engraved. I know how to fix it in AI, but when using the premium art I’m hoping for a more plug and play experience. 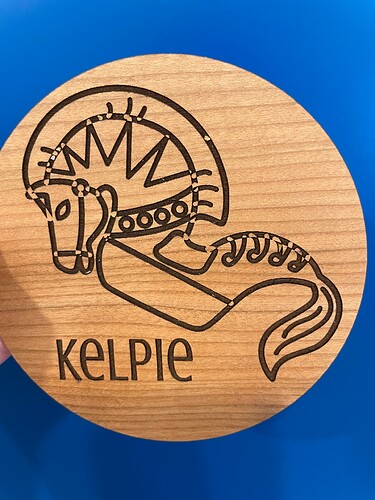 Although really GF should “flatten” these vector images down before engraving to prevent this.

The premium art images are licensed for us from the Noun Project, so Glowforge doesn’t have control over whether they’re properly welded or not.

That makes sense and it’s nice to know where they are licensed from. I guess it might be nice to have some process as suggested by @jestelle above to prep them for engraving so that it’s not a problem.

I may be speaking totally from ignorance here, but could those unengraved spots be rivets in the horse’s harness?

I think those round circles might be, but they’re referring to those small negative spaces above the ‘creature’s’ mane and to the right, on the top just past the saddle.

Yes it’s where every line meets/overlaps. It’s the same issue as if you don’t join text up properly in AI (as I found out the first time I did that).

Here is another example with a play camera I printed for my kiddo. You can see everywhere the design has lines that meet there is a bit that doesn’t engrave. 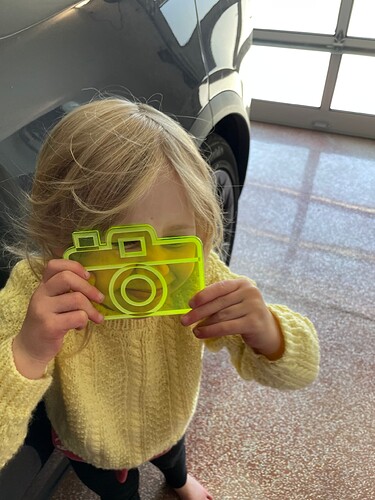 They could solve that and other design issues in one fell swoop just by not using exclusive OR when determining what to engrave. Should be a very simple change in the software and could even be a flag that’s user-set if they wanted to keep that functionality. Come on @dan … That’s been an annoyance forever. 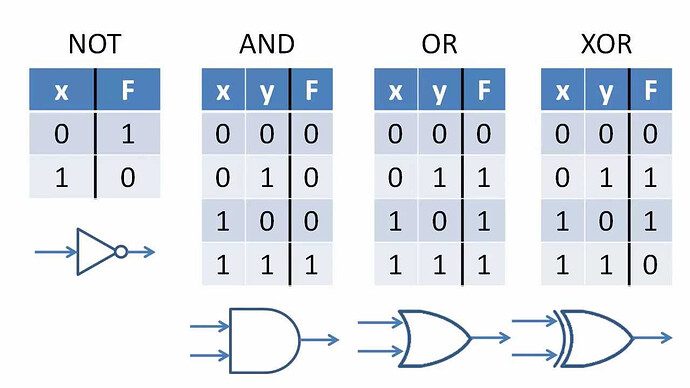 XOR logic states that the only time you get TRUE (in the case of the glowforge, laser fires) only one true can exist. If both sides of the operation are true then they cancel each other out and become false. What we WANT is just straight OR. Either side can be true, and BOTH being true is also… true. So basically, overlapping lines would not cancel each other out when engraving. It would also eliminate those issues where people accidentally have two of their design on top of each other and the laser does nothing at all and they open a trouble ticket.

If someone could only find that one bad XOR logic gate, all our problems would be solved

Added addendum: for scores or cuts, but not engraves as is pointed out to me below.

Of course if not flattened, you just doubled the amount of burn in a location by overlapped burns.

Meanwhile, you can fix the problem yourself by exporting the design and welding it in your design software. Kinda defeats the purpose of having easily accessible art in the GFUI though.

I love the play camera! That is an awesome idea! And it looks like she definitely enjoys it!

Yeah I have exported stuff to fix it and also just to make sure it’s lined up right previously so I can definitely do that and I have Illustrator which I do a lot of work in. I guess I raise it because if GF wants to make it possible for folks who either don’t have or don’t know how to use AI or Inkscape or similar to still print things using the premium art (like you are choosing to have a GF subscription instead of an Illustrator subscription) this is something that should really be resolved for the best experience.

Thank you! She’s a big fan of it, she jumps out and yells “PICTURE” all the time holding it.

Of course if not flattened, you just doubled the amount of burn in a location by overlapped burns.

True is true. Not True + True. On an engrave, it only gets one pass unless it’s another STEP. You could possibly make an argument for that if it was a score, but we’re talking engraves here. And you can already create a second step with the same passes already.