A member of the Glowforge User Group on Facebook suggested I added an engraved shape to the end of my design and set the power to 1 so that the fan would run longer and clear more odor from the machine (I was having issues with smell since the machine is in my home.) I’ve never engraved with my machine since receiving it last month, I’ve only tried scores and cuts.

I added an engraved shape with my next cut from PG Medium Draftboard…I uploaded a small square and manually set the engrave to 1000speed/1power and left the default 225 LPI. About 1/4 way through the engrave I realized it was very deep and dark, which defeated the purpose, so I canceled the print.
I then proceeded to my next task, cutting a puzzle from 1/4” Sande Ply Fromm Home Depot (170/Full/1 pass) The cut started correctly but then the power tapered off halfway through and became very inconsistent, not even cutting through the masking in places.
I’ve only logged, maybe, 40 minutes on my machine and it’s not visibly dirty at all, but I still decided to stop and clean all the lenses before trying anything else. After cleaning I attempted to cut a test circle from a scrap of Sande Ply I cut from a few days ago. My setting are exactly the same, but this time it only left a score line instead of even attempting to cut all the way through.

I feel like something went awry after that first engrave but I’m not sure what I could have possibly done or where to go from here.
Any help is appreciated! Thank you! 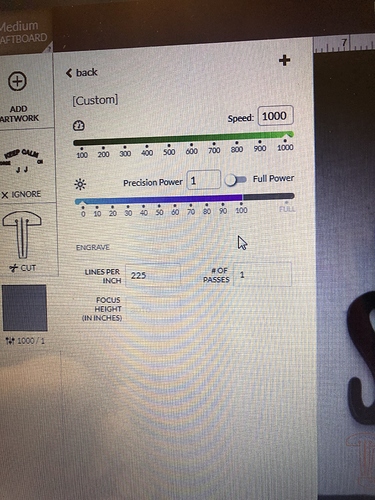 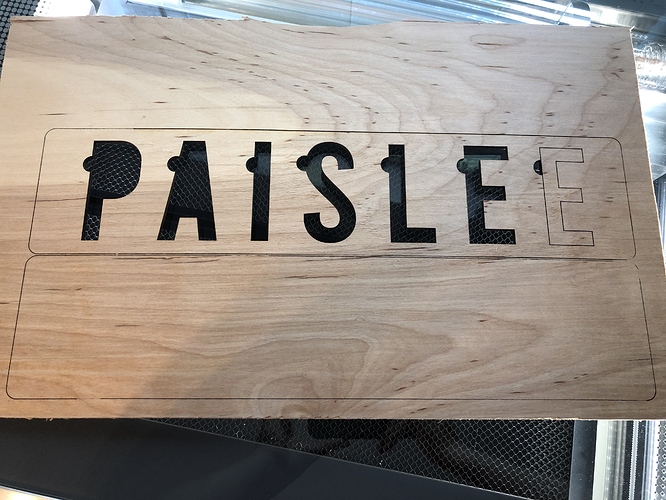 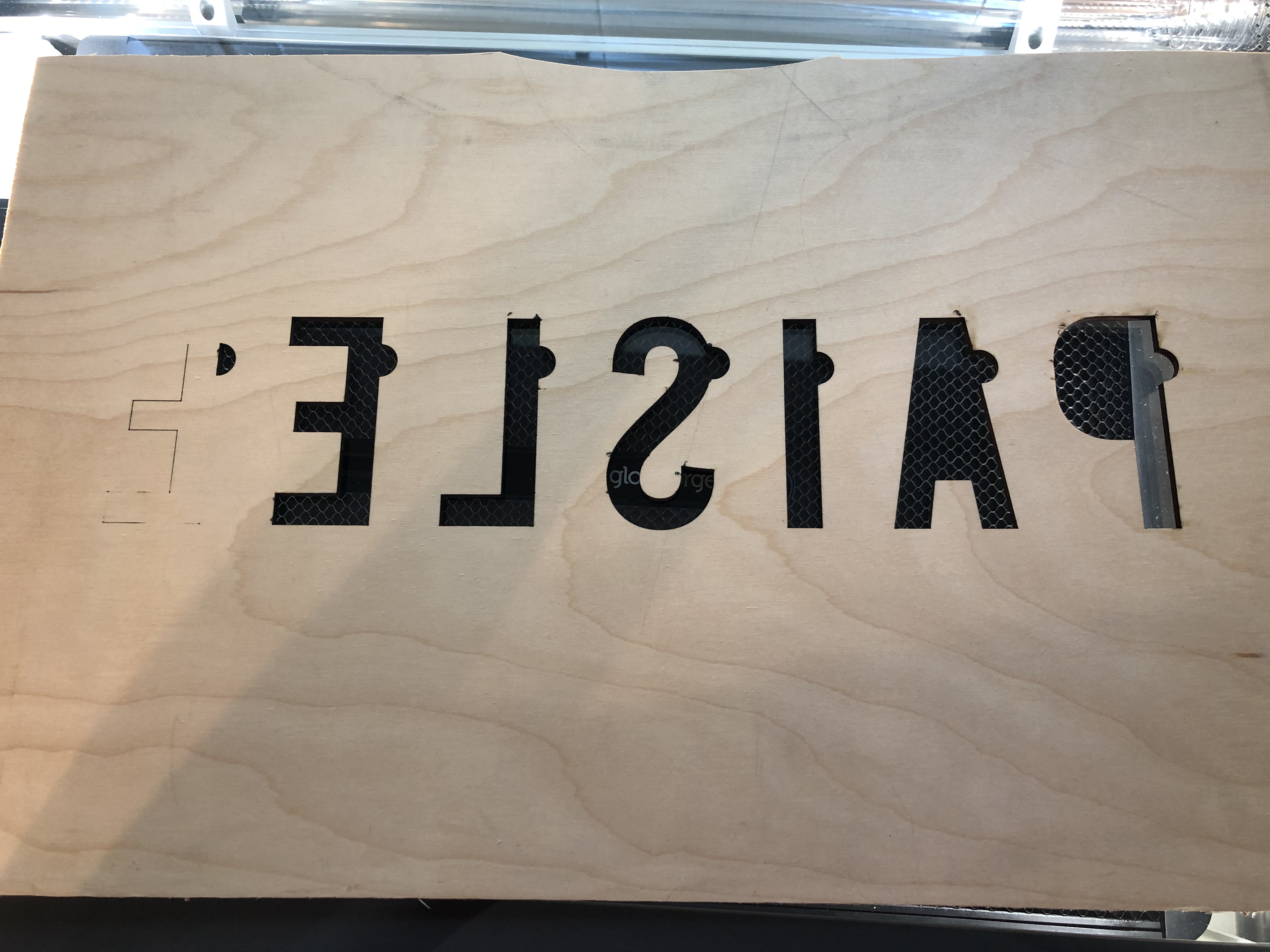 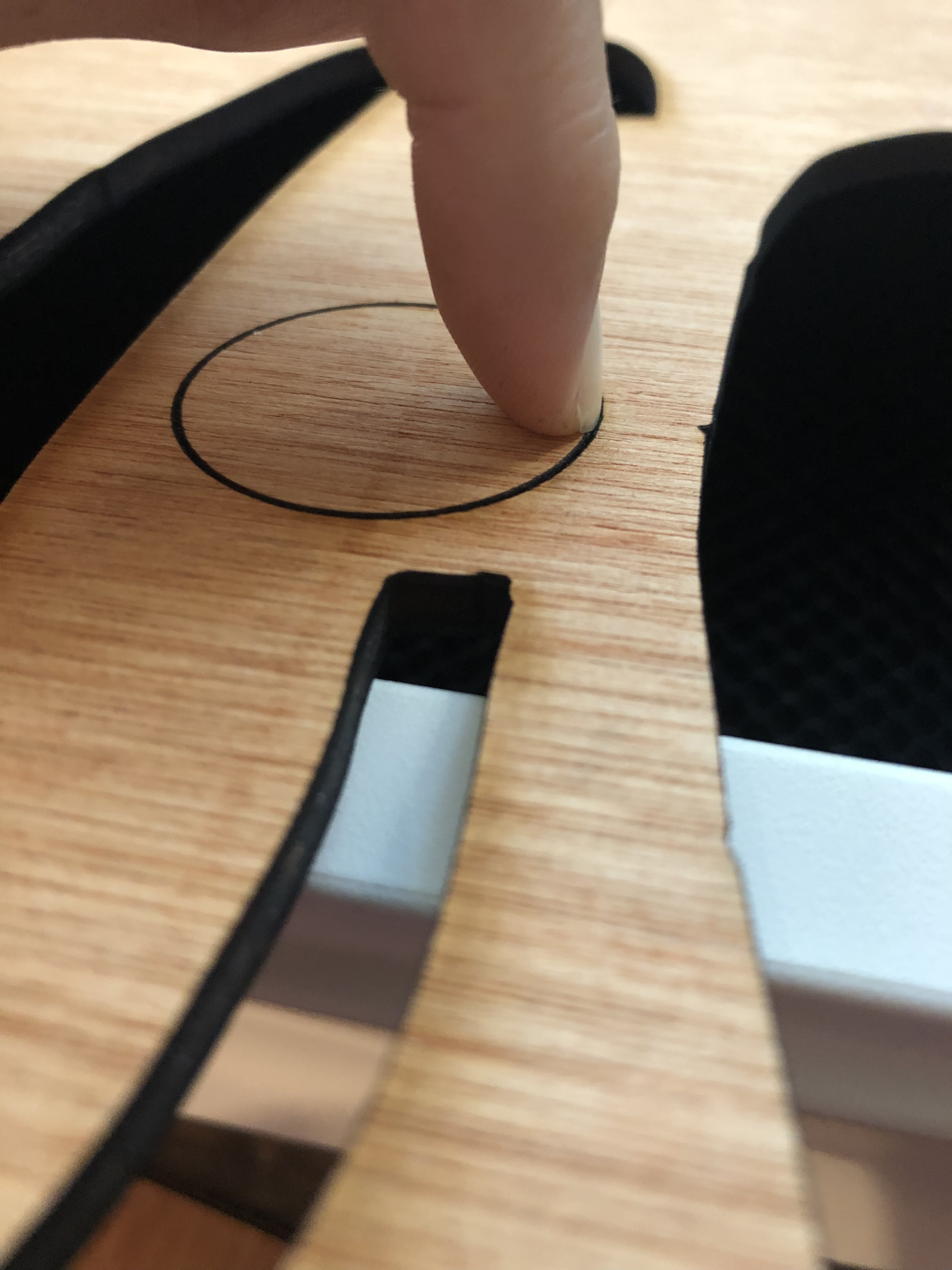 Replying to add a photo of the initial engrave since I’m not sure if the video loaded (I’m sorry, it’s been years since I’ve been active on a forum, lol) 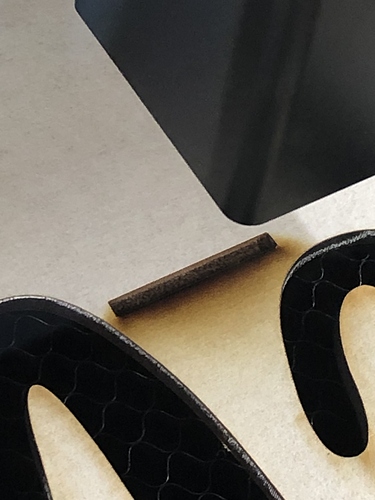 First off…you shouldn’t be having a great deal of smell when you are using the machine unless your exhaust setup isn’t secure enough. There will be a whiff of leftover smoke that escapes any time you open the lid, and there will be more of a whiff if you are cutting something out of the center of a board, because a little bit of smoke gets trapped under the cuts, and when you lift the cuts, there’s a little bit of smoke trapped underneath that gets out. But while the machine is running, you shouldn’t smell anything much. If you are smelling a lot of smoke to the point of it being irritating you need to make sure the whole exhaust run is sealed. It’s very easy to get a bad or incomplete seal around the ports, or there might be too tight of a bend in the hose (nothing below 90°) or the hose run might be too long and the smoke isn’t being evacuated from the machine. Those foil hoses also develop pinhole leaks. Check it over and seal around the ports and any pinholes with aluminum tape. It’s actually impervious to air/odors.

The second issue you are having with the material not being cut through evenly is common with non-proofgrade materials. They are cheaper, but they are also riddled with Bondo plugs, knots and voids that will keep a cut from going all the way through. Locally sourced plywood is set up for blade cutting and CNC, not laser use. I won’t use them if I can avoid it. If it’s all that’s available, sometimes you can shine a strong flashlight through the wood and spot the voids and plugs inside, mark where they are, and lay your cuts around them.

It can sometimes be hit-or-miss with hardware store plywood.

My vent setup is fairly temp since I just got the machine and I have parts on the way to help prevent any smells coming back into the room. The engrave suggestion was just to serve as a very short term solution.
The issue is, however, that the engrave should not have even marked the masking set at 1000/1, right? It went about halfway through the thickness of the draftboard. I checked and rechecked my setting but I don’t see how that could have happened.

From there my GF started making inconsistent cuts on materials I just used. I verified that the material is flat (flatter than some of my slightly warped PG Maple ply) and used wood pins, just in case. You can see in the picture that the circle is directly between two letters that were cut a few days ago using exactly the same settings. It’s not like it’s just not cutting all the way through, it’s only scoring the surface.

It won’t let me upload the video because it’s too big, but it didn’t cut PG Medium Draftboard at default settings. 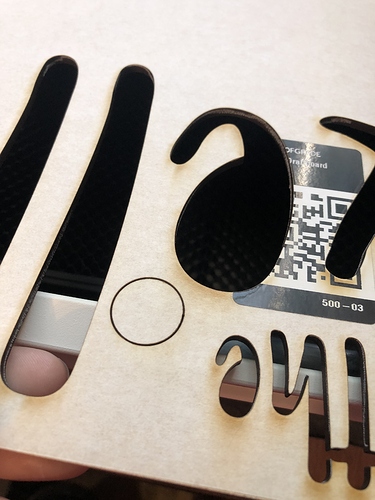 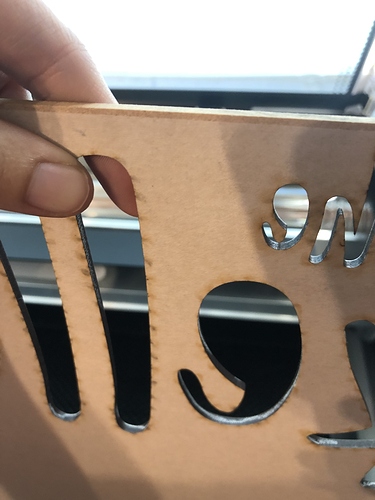 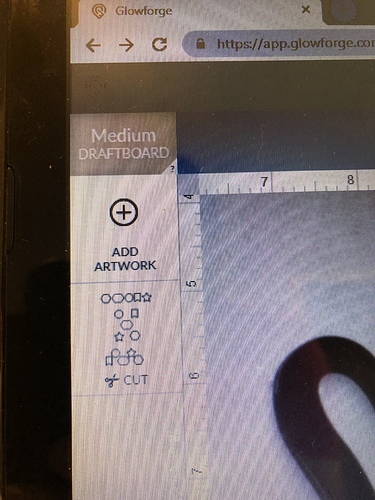 Yeah, support might need to look at your logs if the power is varying that much.

Thank you for replying! I’m chatting now with support. Hopefully it’s just a silly user error and not something more serious. My GF has been flawless until that engrave.

At 1000 zoom and 1 pew, that engraved box is VERY dark. I really can’t guess at the cause, but assure that support speaks to that. Super weird.