I loaded some proofgrade maple today and the app recognized it but failed to.cut theough it entirely. 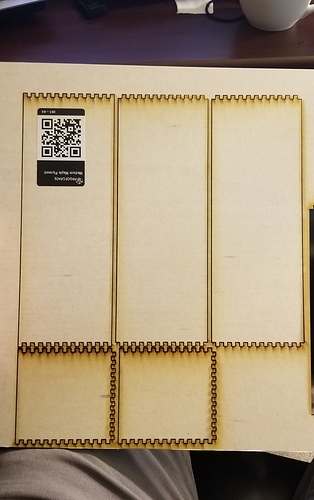 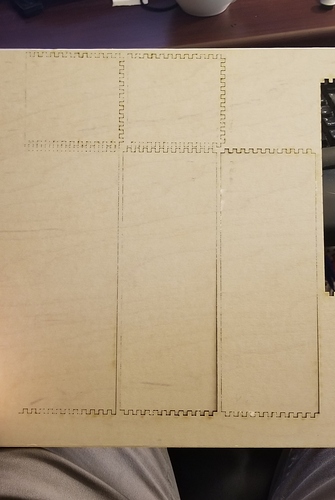 I have had the same thing happen!

Did you check the Troubleshooter?

Yeah, all of those things were fine. It was a brand new sheet I have had sitting under pressure to keep flat. Nothing that I can tell is dirty, etc…

I moved the design to another new pice of the same material and it cut through fine about five minutes later. I’m thinking that perhaps the machine was too cold since it had just started up. The temp strip read 76 degrees, but who knows. It worked the second time. Not the end of the world. I’ll make use of the wasted pieces.

Just as a suggestion to keep from wasting material, it’s possible to have incomplete cuts on any material, (even PG sometimes, but a lot less frequently).

I use one of these Vvivid Weeding tool to check to see if the cut has gone all the way through before touching the backing material on the bed. If the cut is incomplete, you can run a second pass and finish it to save your material.

Or you can press on it to see if it separates if there is any warp at all in the material, but that weeding tool is also handy for weeding, poking, scraping out channels, and a lot of other things, so I keep a couple around.

I’ve has this happen, too. It taught me to always, always secure all materials with magnets or those new spiffy pins, and to check that all cuts were successful with a weeding pick or a piece of blue tape before moving the material or making any changes in the GFUI – gives you a second chance to re-cut as needed. This has been a job-saver for me.

If I’m really concerned about a piece (limited or unique material, etc.), I go ahead and reduce the speed by 5-10 zooms. YMMV, of course.

Yep, I was going to run the cut again but wasn’t sure how well it would line up on the second pass. Glad to hear that has worked for others.

@Jules and @dwardio both are right. It can happen with

even when everything is right but it is rare. I’ll just reiterate that you can and perhaps should pin everything down so you can repeat the cut if need be. It really hurts to ruin a 3 hour engrave by the edges not cutting through. Don’t ask how I know this…

As long as you don’t move it, it will come out perfectly.

I had the same thing happen last night I cleaned everything, Camera Lens etc and then ran it again no problems

I feel like I’ve seen this topic pop up enough that the Glowforge team should address it on the software end by adjusting the settings for PG materials.

All these failed cuts have just barely failed. It seems like even a slight increase in power or decrease in speed should solve it.

Apparently I’m a bit feral, compared to everyone here, because when that happens to me, I just break the wood and pop those suckers out. You might have to manhandle it a bit, but they actually come out easier than you expect. So it’s not completely wasted. You might just have to sand some of the edges a little.

They want you to report when this occurs, but I have seen it so infrequent that I suspect it is a non issue until a complete bad batch is shipped out and people are seeing constant failure. Then it is off to the contractor to see how they screwed up.

I have run a razor knife blade into the cracks to separate the final veneer left uncut. Seems to just pop and drop.
Only had it happen a few times, and a minor board warp was evident (after or during the cut, sadly). Seeing a cut piece drop to the tray during a cut is an Ooopsie moment.

As mentioned, even with a board that has no give when placed on the tray, a magnet or two eliminates possible issues. You are in fact heating the material, and there is an expansion probability that will vary with moisture, temperature, etc.

Mine had areas that were cut through entirely and other areas that almost didn’t cut at all. It was the only time it has ever happened. I have had pieces that were 95% cut and just needed to be popped out like you’re suggesting. This was more like 50% cut and imposibble to pop out without destroying the remaining board and pieces.

This was definitely not due to warped material or anything like that. I have had material that warped before and the main issue from that is that the resulting cuts are not perfectly straight. The only thing I can figure in this instance is that it was the first cut of the day and possibly the internal temperature was too cold. It doesn’t really explain why it cut through in some sections and not others. Another odd factor is that the app view that was showing the progress, was actually showing some areas of the path lines that looked to be missing. It was strange and made me think there was an issue with my file. I double checked the file. It seemed fine. I used it a second time and cut on another piece of the same proofgrade material and it worked fine.

I know it has been stated many times in the past. But… just as a test, I put my wood back in and tried to line up the images with the bed image. In the app it looked about perfect. In reality the cut was nowhere close. Both the angle and the position were significantly off. I know this is something that will take some time to resolve, or it may never get resolved. But it definitely reaffirms your point about “not moving” your material if you want to run a second pass. As soon as you move it, it is as good as ruined.

Yes makes you wonder how they will ever make the pass through work, doesn’t it.

I know some people have reported using the passthrough with success. I only bought the basic. So, it is less of a concern for me. However, lining up cuts in the middle of the bed seems to work fine. It is anything on the outside edges that starts to distort and it would seem the camera calibration is fish-eyed. I’m not sure if anyone else has this issue but my outer edges on the bed image are always slightly out of focus. Everything in the middle is perfect. So, assuming you were using the center of the bed to align your passthrough, you could probably get reasonably accurate cuts. That will likely fall short of a lot of expectations though, since you don’t buy a laser for “reasonably accurate” purposes. I’m excited to see how it improves. It is easy to work around for now. This was just a test to see if it had improved at all since I last saw someone post about it.

I had a problem with my last cut on Proofgrade maple too. I assumed maybe it was a little warped, but this is looking like a trend with the Proofgrade maple. Parts of my cut were fine, while other parts were about 80% through. I couldn’t just pop it out. I even tried using a utility knife to cut through the rest of the way, but I ended up just trying(and failing) to line it up for a second pass. It cut through better on the second attempt, and I was able to snap off the slivers created by the offset from the failed attempt at lining things up.