If you aren’t on the publicdomainreview train yet, it’s pretty great. Anyway, I saw this: 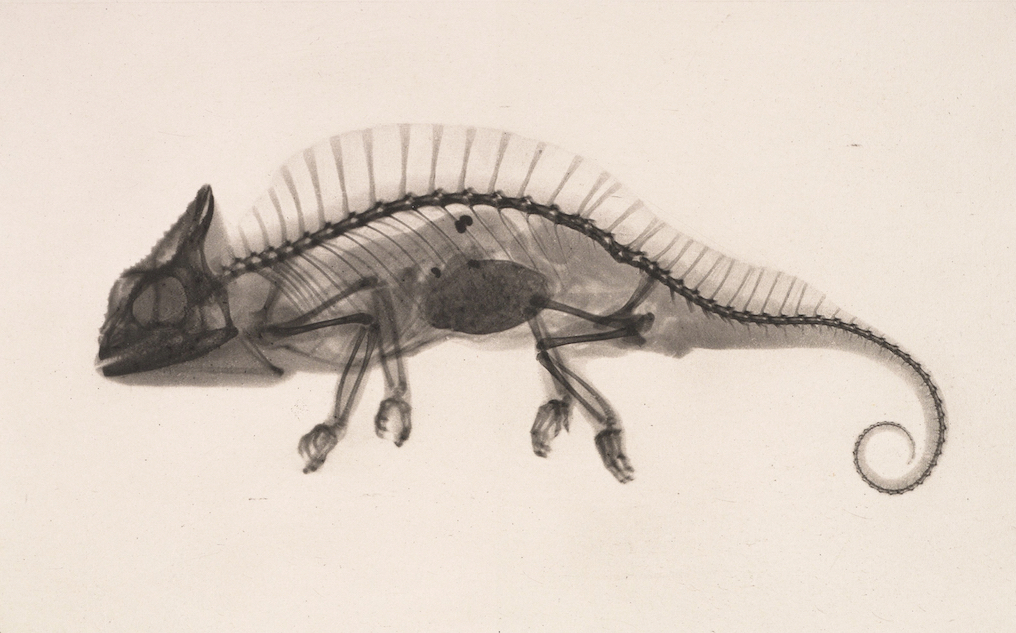 Photogravures from one of the first series of X-rays ever produced, including, in addition to the skeletal forms of animals and human limbs, carved cameos and an assortment of various materials such as metal, wood, glass, and meat.

And decided to clean up one of the xrays and see what I could do, just a simple engrave. 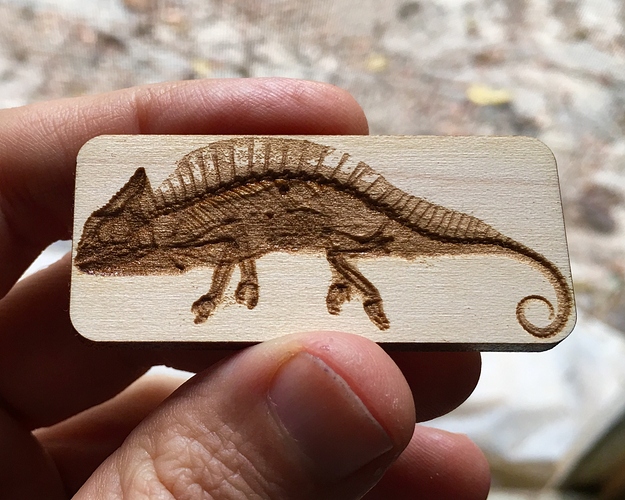 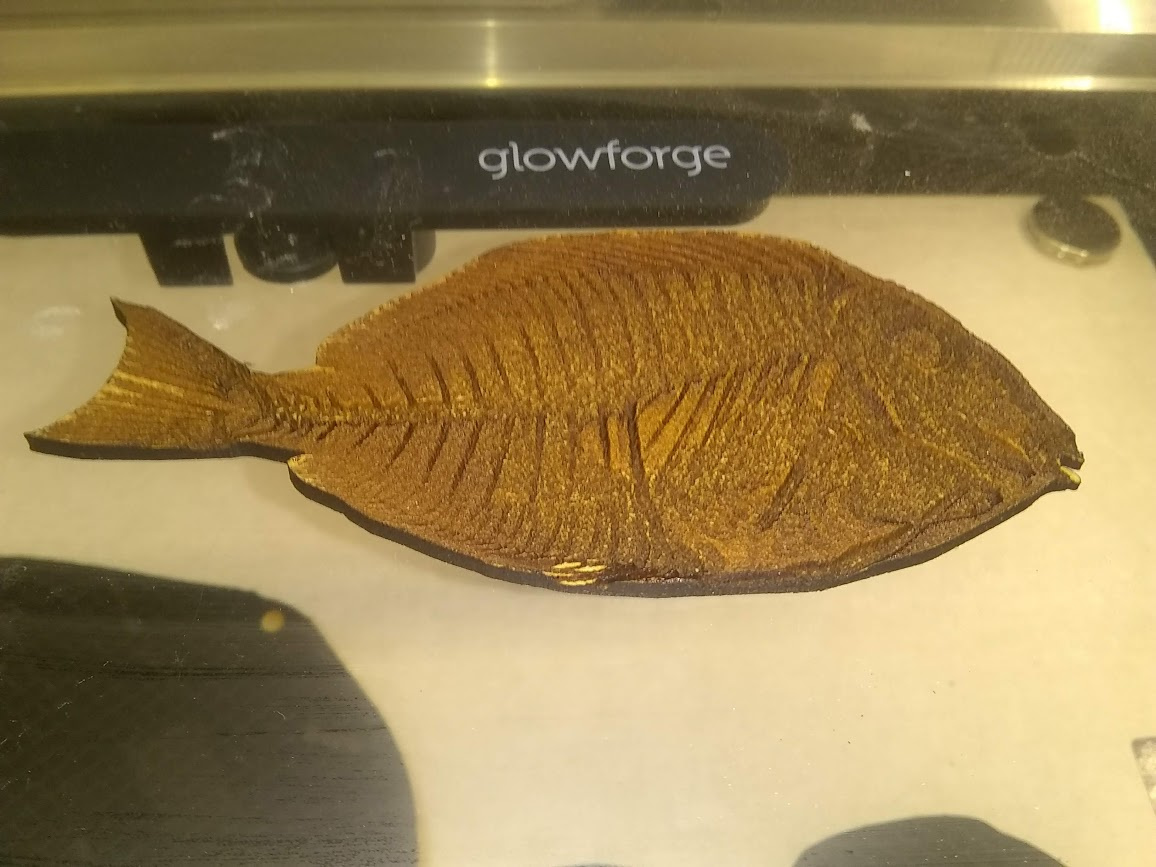 @evansd2: I like yours better! Mine was a quick test using PG medium draftboard with a “3D engrave”. Cleaned vigorously with an acid brush with shortened bristles and denatured alcohol (i.e., ethanol).

IMHO the unetched wood around yours makes the “X-ray” pop.

I debated inverting the image to get a “white bones” look to it, haven’t tried it yet though.

I actually like your fish as is, but if you want more contrast a solid bright wood like maple or basswood will do it. 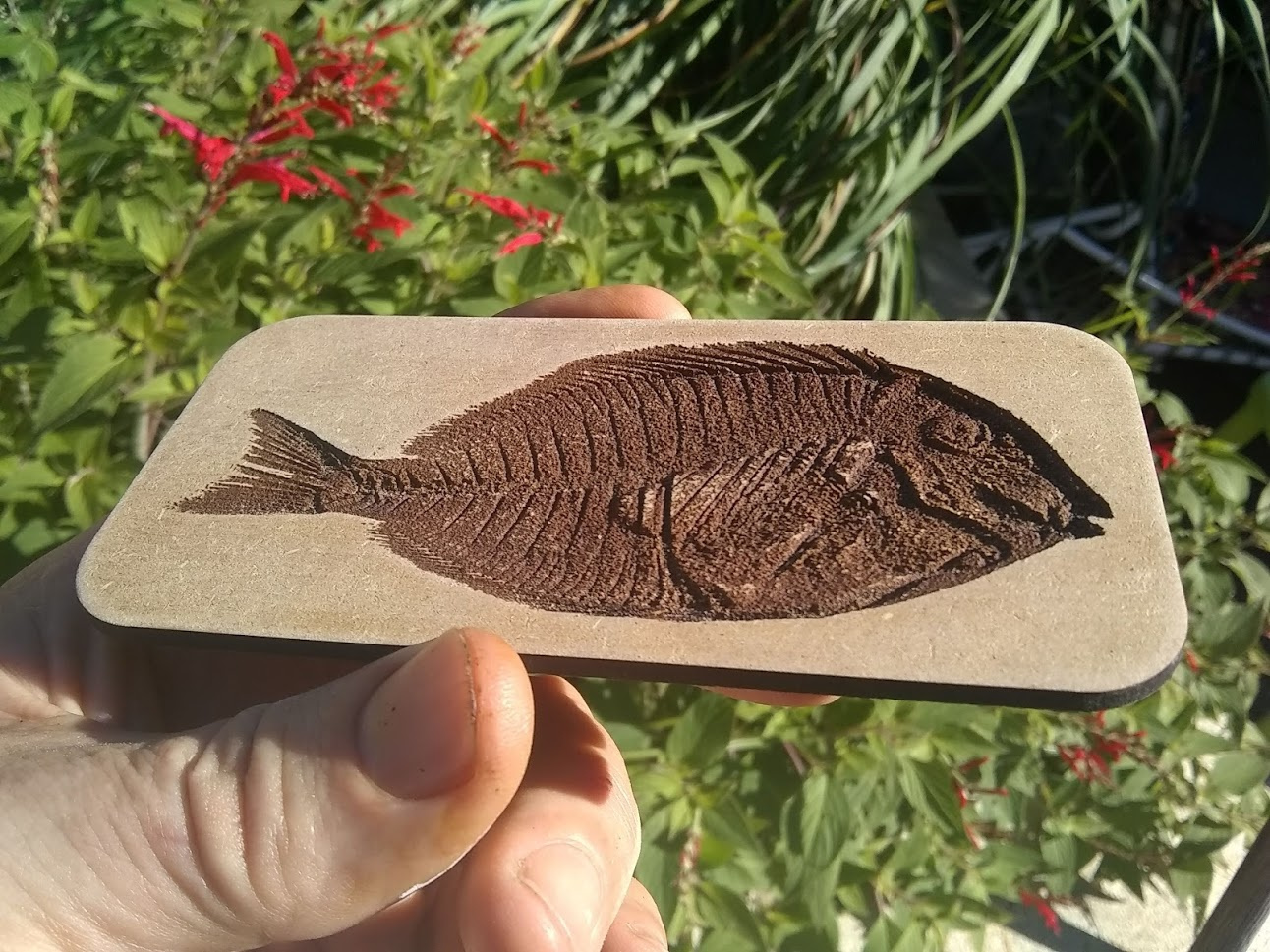 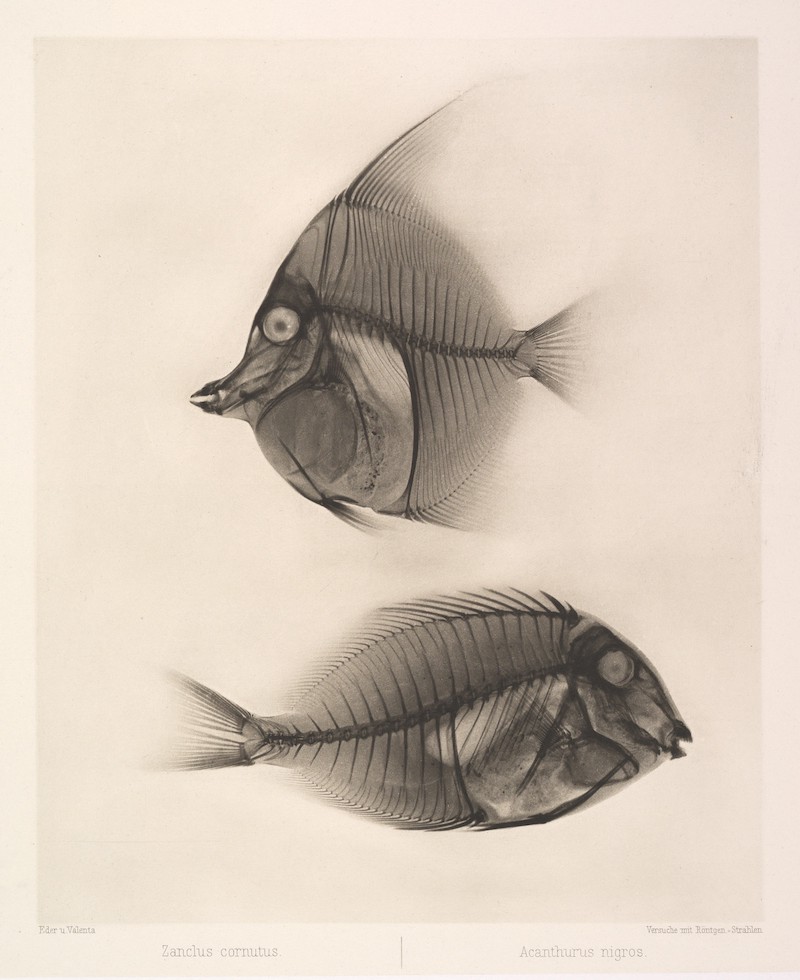 what might be even cooler here would be to engrave out the negative. so the fish is raised instead. 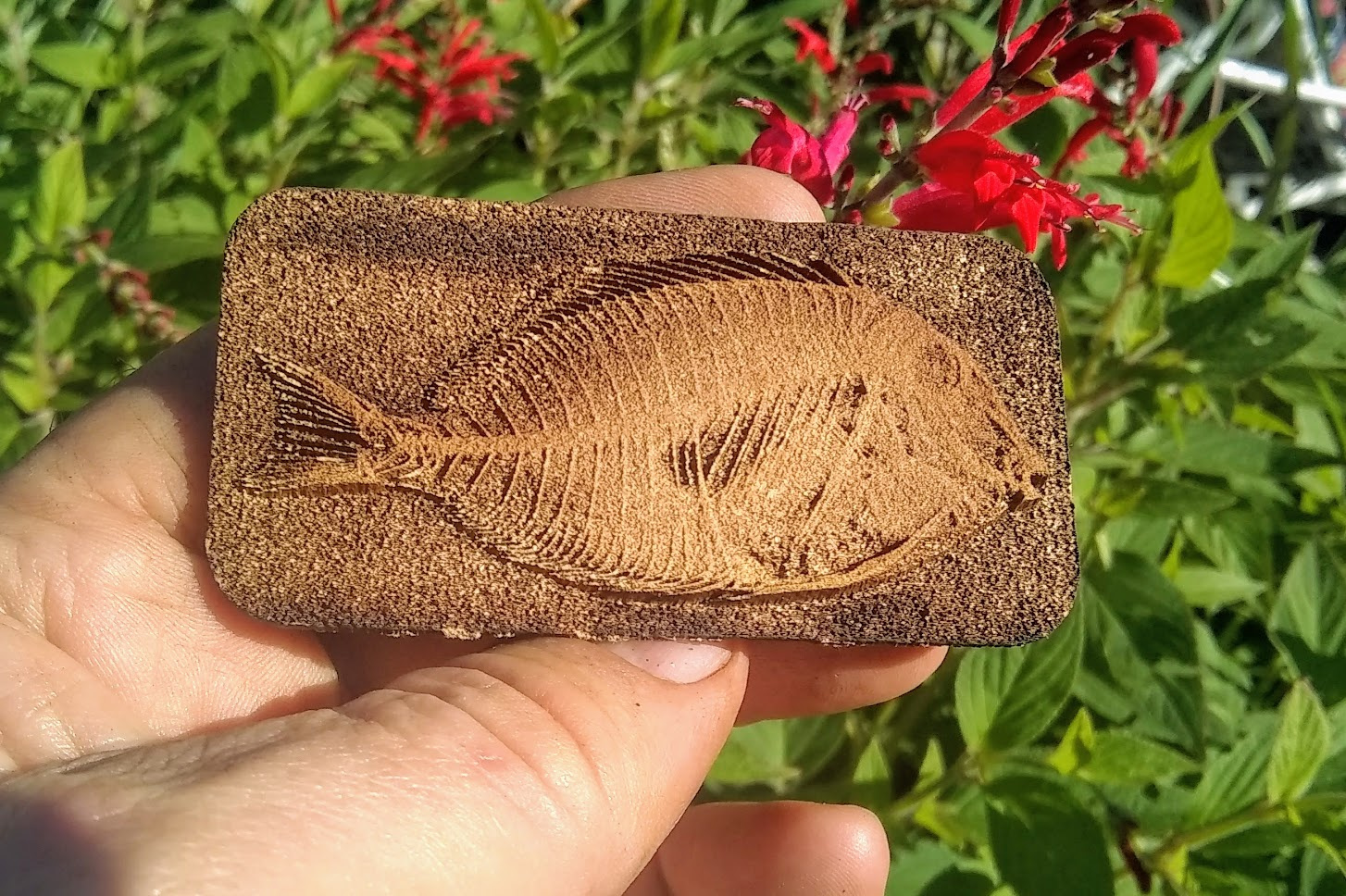 PG medium draftboard again with a thorough cleaning with ethanol and a brass wire brush this time. “Real” wood would be better me thinks! 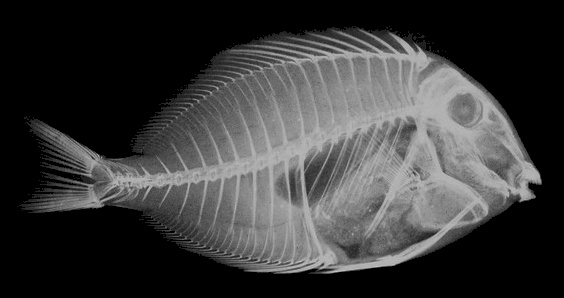 that’s cool. there is some texture to that negative engrave i wasn’t expecting, especially when i see the black is pure flat black in the file.

@shop: Draftboard is not wood!

I’m still learning what happens when one engraves it. Maybe acrylic would be worth a try for this?

oh it’s a kind of wood. it’s just not hardwood. it’s wood particles with resin and other composites. but it definitely cuts/engraves differently than a hardwood.

Can you imagine being one of the guys who did these Xrays? They were among the first people to use the technology, and very likely the first to ever do these particular subjects. Invisible light, that shines through things? It must have seemed like literal magic at the time.

I finally got around to inverting the chameleon on maple. 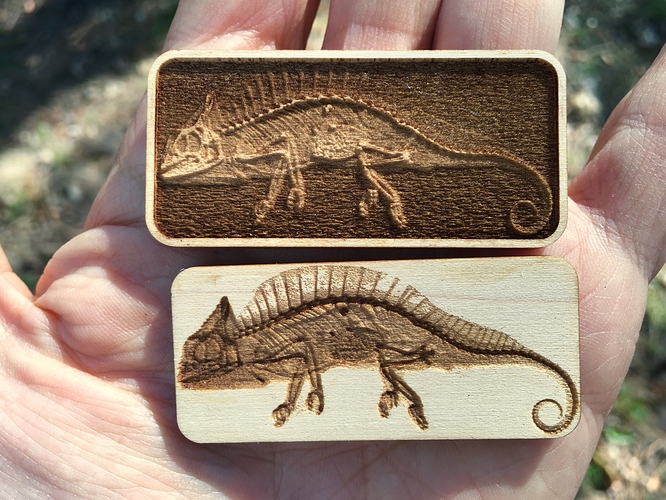 Can you imagine being one of the guys who did these Xrays? They were among the first people to use the technology, and very likely the first to ever do these particular subjects. Invisible light, that shines through things? It must have seemed like literal magic at the time.

And they all probably died of cancer soon after from being exposed to unshielded x-rays.

According to an old particle physics experimentalist I once chatted with, in the early days of particle accelerators the physicists used to align the beams by shooting them through their eyeballs and ‘looking’ at the Cherenkov radiation produced to see how focused the beam was.

@evansd2: I like it! So how did you round the corners of your bitmap image used to 3D engrave? I have not figured out how to do that in Inkscape—although I’ve tried a lot! Not obvious, at least for me.

@evansd2: Thank you. So NOT using just Inkscape. [sigh]

Just a SMOP in Python to add an extension? Putting that on my “List of Things to Do Real Soon Now”!

Oh boy, gotta get some of these in edge lit acrylic!