My niece is an artillery officer. I had previously 3D printed a 75mm shell pencil holder. So apparently all the NCOs wanted one. Well how do you top a 75mm shell? Well a 155mm shell. So there is a guy on thingiverse who posted some models of various artillery rounds, but the 155mm model he posted is waaaay bigger than any printer I have access to. Yes in halves it does fit on the gMax. I asked him if he’d be willing to cut his model into 4 sections, so it would fit on a prusa, but he wasn’t (in fairness, he sells premade ones). So off to fusion 360, and made it (the good news is the 155mm shell is essentially unchanged since WWII, so lots of military procurement docs online to get the specs from… I printed the shell sections on the prusa (took 8 days total). Then the fuse on my form 3 as the inlay writing and adjustment screw are intricate. A lot of airbrush and brush time later, it’s ready for the stencil, which I cut onto laser safe stencil sheets on the Glowforge, and sprayed the letters using removable adhesive to attach it. Getting the fuse accurate was a pain. 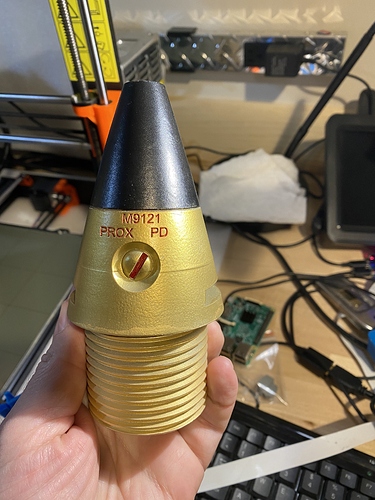 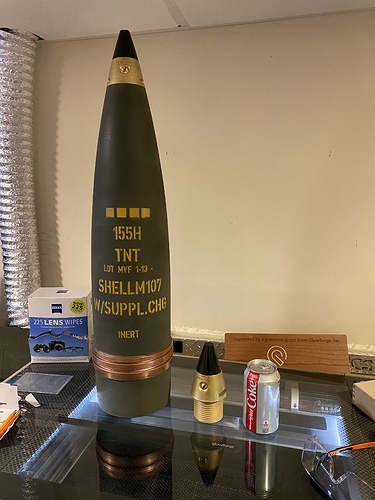 It was tippy when I first assembled it, so before gluing, I poured 15lbs of concrete in the bottom: 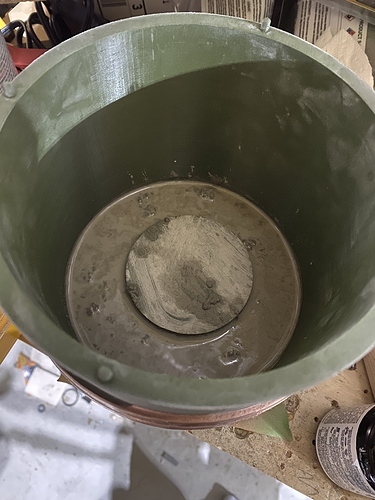 In person it’s real enough, I added inert to the stencil.

I love 3D Gloop for chemically welding PLA by the way.

Holy smokes, that’s amazing! What kind of pencils do you keep in there? (Answer: very long ones.)

no banana scale? so how the heck are we to know how big that is. I mean who has ever even SEEN a coke can?

What kind of pencils do you keep in there?

This was my question! I mean, maybe it’s a yard-stick holder!

The NCOs are going to be amazed!

good on the “inert” label

I mean I’m not one for labeling people, but that would be an unusual name for a neice…

Holy smokes, that’s amazing! What kind of pencils do you keep in there?

That was not this shell, but the smaller one I did (note the weathered metal scratches around the “cut” hole, the fuse wrench cutout and the fuse set screw.: 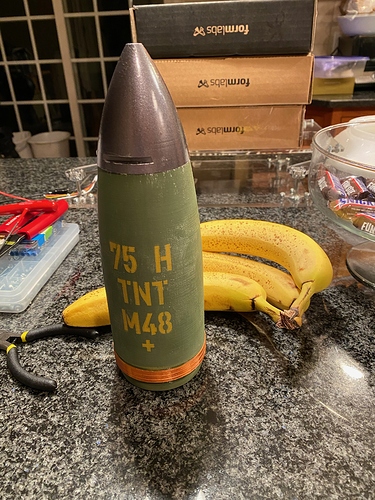 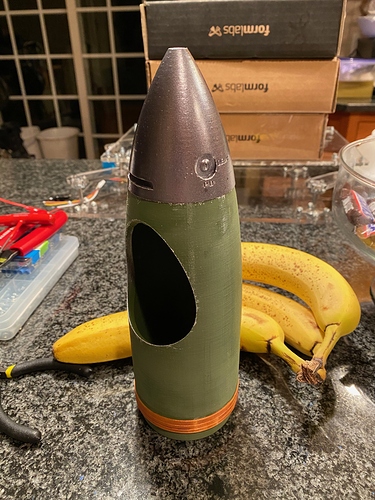 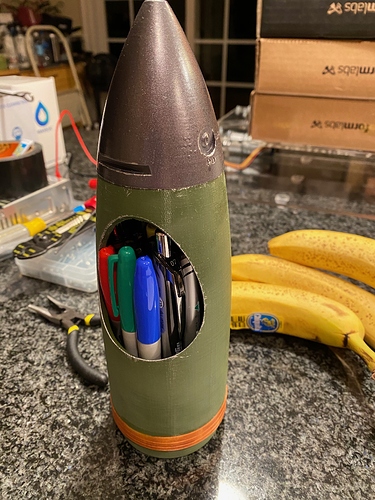 I have learned a lot about airbrushing since then…

but that would be an unusual name for a neice…

What were her parents thinking?

(Hey, I was tired… hadn’t slept for almost 30 hours trying to get through a dozen scheduled, late, rescheduled flights, missed connections & then finally giving up on the airlines in DC and driving back to CT in the wee hours. Is it just me or has flying gotten more unreliable over the past 20 years?)

What were her parents thinking?

If you met my sister you would understand…

That was not this shell

I know. That was my lame attempt at humor.

Dang, I wish I had an uncle like you

This project is off the hook!! So many different skill sets. I am awed!

well heck we can call you Bert and Inert if you want.