Puzzle for the kiddo

I’ll be out of the country for a couple of weeks for work, the longest I’ve ever been away from my four-year-old daughter.

I was planning to leave her a note for every day I’m gone (here’s a map of where I’m going, here’s what the city looks like, here’s the kind of food they eat there…) and yesterday I decided to make her a custom puzzle and include a piece with each note. 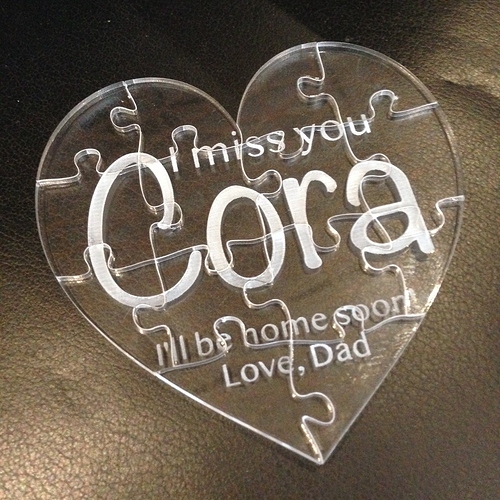 Nothing fancy, but should do the trick. I’m a programmer, not a designer.

Here’s the process for anyone curious: I did this all in Inkscape, which I’m grudgingly coming to appreciate as I get more experience with it. If only it didn’t run under XWindows… I used @Draradech’s Jigsaw puzzle generator to make a 4x4 puzzle, then Edit>Clone>Create Clone to make a symmetric heart shape, cut it out of the puzzle by duplicating it then selecting the puzzle and doing Path>Cut Path. Merged the puzzle with the original heart and deleted the bits outside of the heart. Next I added the text on a separate layer, then copied both to a working layer and put away the originals. I had to pull the pieces apart to adjust for kerf (it would be way too loose if I cut it with the pieces together), so I did the same cut operation to split the text: First convert the text to paths with Path>Object to Path, then duplicate the puzzle, select the text, and run Cut Path. Unfortunately, this doesn’t close the text path segments so I had to do a lot of tweaking. I think I should have done Path>Division… I’ve found Inkscape’s path operations to be nearly inscrutable. Division works okay on closed paths, but if you have an unclosed section the whole thing just vaporizes. And the results depend on which path is on top, which isn’t always clear in the UI. Anyway, I got the pieces separated without too much headache, then copied a couple to do a test fit. I outset the cut by 0.15mm (set outline stroke width to 0.3mm, converted the stroke to a path, deleted the inside path) but that was a little too tight. Did it again with 0.2mm stroke width and it’s perfect: the pieces press together easily but hold snug. I hope she likes it!

Oh, I forgot to post settings. Small text was SD engrave with the power knocked down to 80, big text was Draft engrave. Cuts were the default PG cut. I added a score around the big letters, which bit me in the butt twice when I forgot to change it from the default cut. I sure wish there was some way to specify the settings in Inkscape…

Your also a loving dad. Cute little puzzle for a four year old.

Truely going to be a keepsake. Great concepts!

What a wonderful project! Should help your daughter with Dad being away–she will remember the effort you went to all her life.

What an absolutely wonderful gift for your daughter. Fingers crossed you see her soon!

That is a great gift. She will always treasure that.