So a friend of mine asked if I could engrave a whiskey bottle for her husband, while it was still full… I told her it would have to be a flatter style bottle, but I would have to find out if it was possible. I looked around on here but didn’t really see any answers.

Does anyone have any experience with this? Thanks!

No experience with it, but I wouldn’t be afraid to. There is some heat deposited, but not enough to shock the glass enough to break it.
To err on the side of caution, I would recommend you pour the whiskey into another container and purge the bottle of fumes first.

A laser beam won’t penetrate glass, but it does cause a tiny stress fracture from the heat where it hits. Usually that results in a tiny chip popping off. But it can crack thin glass if the heat isn’t distributed correctly.

(For that reason, a lot of people will use a thin smear of dish soap on the glass to disperse the heat slightly.)

I would expect that it would actually be safer to try to engrave on a filled bottle, since the heat would have somewhere to go. But I’m not going to test it. (If I’m wrong, I’d rather not wind up with an expensive laser bed full of liquid. That would be too costly a lesson for me.)

(If I’m wrong, I’d rather not wind up with an expensive laser bed full of liquid. That would be too costly a lesson for me.)

Since it would need the bed removed, I’d put it & whatever supports were needed for proper height into a shallow pie plate or other baking dish just in case a stress fracture propagates and the bottle broke.

That’s kind of my thoughts as well…I’d really rather not have to clean up liquor from the bottom of my glowforge and the table it sits on if something were to happen… I hate telling people no, but, may have to this time…

Just put it in a pan, like @jamesdhatch said.

I agree that the liquid inside should act as an insulator to help to keep it from cracking.

I may do that, but, I’m kind of thinking I’m just going to tell the person I’m not comfortable doing that lol. They are a friend so I’m sure they 'll understand**

The bottle has to be less than two inches at its widest point. I’ve never measured a Woodford Reserve bottle, but I doubt it is that skinny. You could just let her figure out it isn’t feasible on a glowforge.

I’ve tried exactly that, but haven’t found any whiskey bottle that will fit. Instead, I make custom hanging labels like this: 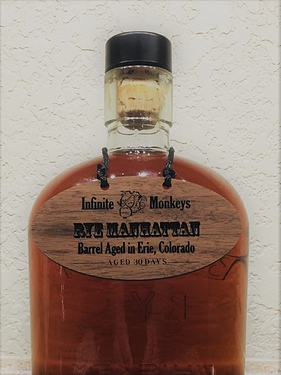 Don’t have a photo handy, but I’ve also engraved labels on adhesive-backed PG wood veneer and stuck them to the glass.

I’ve never measured a Woodford Reserve bottle, but I doubt it is that skinny.

To err on the side of caution, I would recommend you pour the whiskey into another container and purge the bottle of fumes first.

While you’re at it, you’ll want to have a wee nip (for quality assurance purposes, of course!).

I like the idea of making the hanging tags. I may see if the person just wants to do that instead

wide, thick, depends on your perspective, but yes.

I got ya, just wanted to make sure I wasn’t missing something. I think Woodford bottles are thinner than 2"… I’ll have to measure, but thank you!

According to dwardio they are not. I really like the hanging label idea. Paired with some gold-colored chain from the hobby store maybe? Or a leather cord?

I was able to get a pretty good result on an empty bottle. Transferred the liquid back in afterwards 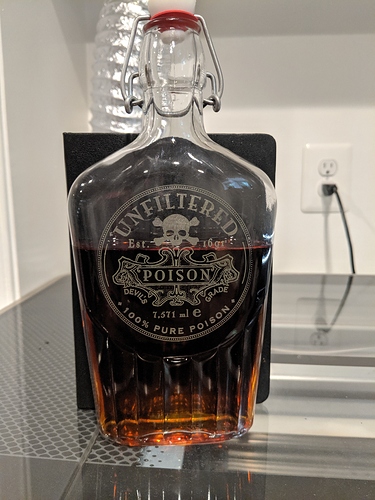 Oh nice. What are the settings?

I haven’t tried it yet, but I plan to do exactly the same project in the near future (customized whisky bottle). The bottle I’m customizing is too big and round for the GF so my plan is to use the laser to cut a stencil and then attach the stencil to the bottle and sandblast it.
The simplest and cheapest version of this concept would be to cut a stencil out of some adhesive paper masking material and use a chemical glass etching cream. You can buy the cream on Amazon or at most craft stores.
The bigger problem is that you can’t get too detailed in a stencil you plan to transfer to a bottle. Small text or intricate patterns are going to have small pieces of stencil that will need to be transferred and placed very accurately. You can not cut them out completely, and finish it on the bottle with a razor, but really small details might still produce unsatisfactory results.

Also, I personally I think sandblasting gives better results than chemical etching, but it requires more tools and a sturdier stencil (usually vinyl, but that’s a no-go in a laser, and the alternatives are pricey).