This fan is rated at 402cfm and I think the GF 4 inch fan is rated at 182.4cfm. https://community.openglow.org/t/need-exhaust-fan/581/3
Are there any recommendations on the speed setting to use on the cloudline (setting 1 to 8) to provide an equivalent airflow to the glowforge fan?
Thanks

Are there any recommendations

Any recommendation would be immediately suspect because it’ll depend entirely on how you’re setup.

For an (extreme) example: if you are venting straight out using 24" of 6" diameter pvc pipe with smooth walls versus using a converter to attach to 10 feet of 4" corrugated flexible insulated duct with two 90 degree bends will give you completely different airflow numbers. It’ll come down to a lot of local variables and for that there’s no magic number. Sorry!

I run mine wide open. I might cut it back if I ever remove the GF exhaust fan.

if I ever remove the GF exhaust fan.

Yeah I almost never run mine without the internal fan on even though I have the booster. The glowforge fan really impedes the flow, and it’s a total pain to remove if you have a pro. I also don’t think my cloudline is much quieter than the glowforge fan when at full speed and it makes far more leak points, so I am kind of wondering why I have it at all.

i would start with wide open and back it up a step at a time to see if you smell anything.

that said, i use different settings for different materials. acrylic or leather: as much power as possible. wood and paper products for me are down a step or two. but the really stinky stuff i take no chances of getting any stank in the room. you can’t go wrong at full power and it’s still only 15% of the sound of the internal fan at full power.

That really surprises me! I have my GF fan turned off and the 6" cloudline is noticeably quieter, even wide open. I bought the basic model and I don’t think removing the GF fan will be that difficult. But I want to wait until the warranty expires before I do any modifications.

When you turn of the internal fan, is it completely off? Just wondering! I ask, because with the external fan having more suction, the internal fan is spinning like crazy and I don’t think it helps anything. I am tempted to put something in the path of the blades so it won’t spin, but that may not be a good idea.

That really surprises me! I have my GF fan turned off and the 6" cloudline is noticeably quieter

So I think it may be because I use an insulated duct. My fan is far quieter with the insulation, I’m so used to the insulated noise level that I think I’ve forgotten how bad it used to be.

Exhaust sound and how to mitigate? Problems and Support

You know, I thought the insulated duct sound reduction claims were probably exaggerated… but nope. it’s way quieter. Strong recommendation, can’t believe it took me this long to do it.

i had insulation on my vent hose when i used the internal fan. it was still way louder than the cloudline. makes me wonder if your cloudline is louder than mine. i can run the cloudline at full speed and still carry on a phone conversation 2-3 feet away from it (it is behind the GF) w/o it being an issue.

The motion system itself should be quite a few dB louder than the Cloudline.

My opinion of the speed is that unless you’re sucking the glass out of the machine, or light objects are flying off the bed, you can’t really have too much exhaust as far as the machine is concerned.

Also, that rating is wide open with nothing attached to it. Basically zero static pressure. Anything attached to it or in the way (stock fan, exhaust grate etc) will reduce the air flow drastically. These fans pull very little vacuum and lose efficiency quickly.

I am tempted to put something in the path of the blades so it won’t spin, but that may not be a good idea.

It will actually improve the airflow through the fan. Spinning blades induce a lot more drag than stationary blades. That’s why propellor-driven aircraft have “featherable” prop blades (they can change the pitch so the blades point straight front/back so there’s no force induced to turn the prop). Big wind turbines do the same thing when it gets too windy. If the blades kept turning, the drag would knock the tower over. With the blades “feathered” so they’re not being driven to turn, the drag is significantly reduced. So if you jam the fan so it won’t turn, provided you have also disabled the fan, your external fan’s efficiency will improve.

My opinion of the speed is that unless you’re sucking the glass out of the machine, or light objects are flying off the bed, you can’t really have too much exhaust as far as the machine is concerned.

I agree. As long as the suction isn’t deforming the machine, you can suck as hard as you want and it only makes the ventilation work better.

I am using the Vivo 195 CFM fan which is quite enough in low smoke situations but if I am cutting something smokey I run both fans. I think that the fact that you would have to jam a fan to keep it from spinning means the energy needed to jam it reduces the airflow. As it is an induction fan with very little spin resistance, I would think that the resistance to being spun would be the amount of energy drained, and the result of letting it spin the equivalent to “feathering” it.

There is broken airflow either way but a lot less if the fan is allowed to spin and as far as I can tell it does not set up a magnetic field that would create electric flow,

But my original question was when the fan is turned off internally , is it really and totally turned off and just free spinning when using an external fan?

is it really and totally turned off and just free spinning when using an external fan?

It’s turned off. It’s freewheeling when you use an external fan.

There is broken airflow either way but a lot less if the fan is allowed to spin and as far as I can tell it does not set up a magnetic field that would create electric flow,

The spinning fan most definitely does create voltage. The motor has magnets and the motor has electrical windings. When the motor turns, the magnets move past the windings and that generates a voltage. For current to flow, the voltage has to go somewhere. But this is a brushless fan with its own built-in controller. The external power that turns the fan on feeds that controller, the controller feeds the windings to spin the motor. So there shouldn’t be any way for the voltage generated by the spinning motor to go anywhere. Which is a shame. Because a really good way to keep an electric motor from spinning is to simply short circuit the motor windings when the motor isn’t otherwise being powered.

So to get like for like performance compared to the 4 inch GF fan over your required ducting route (bearing in mind the GF recommendations for number of bends etc) choose speed 3.
In my case I’ll use speed setting 4 or maybe 5 unless I’m doing acrylic in which case I’ll probably go for speed 8!

bearing in mind the GF recommendations for number of bends etc)

Upstream vs downstream - it’s different math. The Glowforge fan is basically the beginning of the stream, so to speak, and will have the most efficient air movement at that location. If you moved that same fan downstream, the requirements would be very different.

I have found acrylic to be the least offensive in term of amount of effluent. Aside from the volume of air being drawn in It appears that the burning wood may be doubling the raw volume of gas in the machine, which is why there was so much more smoke pushing out whatever cracks, while the air is still being pulled in, when burning acrylic.

If you moved that same fan downstream, the requirements would be very different.

Simplify the exhaust hose model in your mind, make it a straw. The amount of work required to move air through the straw is the same whether you blow through it or suck through it. But if you make a couple of pinholes in the straw, the effects are very different. If you’re blowing through the straw and there are any leaks, straw content will escape through those holes. Pushing through the straw places the interior at above-ambient pressure. But if instead you suck through the straw, the straw runs at negative pressure. Now any pinholes leak air in to the straw instead of out. The amount of air that makes it from the input of the straw to the output of the straw is the same in both cases, but because of the pinholes, the volume of air is different. More air will be exit the fan doing the drawing than the end of the hose with a fan that’s blowing…but some of that drawn air will be outside air that’s leaked in.

Bottom line - drawing or blowing doesn’t really matter from an efficiency standpoint. But drawing matters a lot from a leakage standpoint. If the fan is sucking from the exhaust end of the duct, (small) leaks in the duct don’t matter, no smoke escapes. This is why I run an external exhaust fan at the window exhaust and I disable the internal fan. I get much less smoke leakage.

Loving my S6! A great upgrade. Any recommendations on type/source of insulated duct? Cloudline hose looks a little thicker than ordinary flex duct; does it offer any sound absorption? 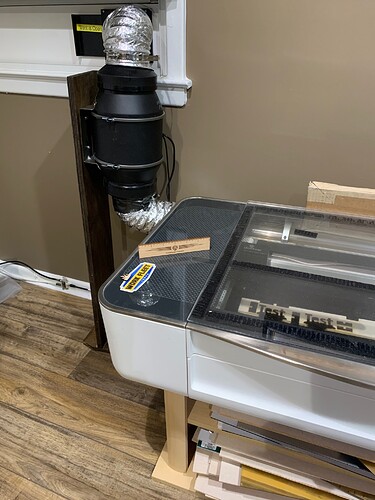 I’m using AC Infinity’s duct hose, and run the fan at 5/8 speed. I’m happy with the airflow and volume level at that setting, but I have a pretty short and straight run as well. 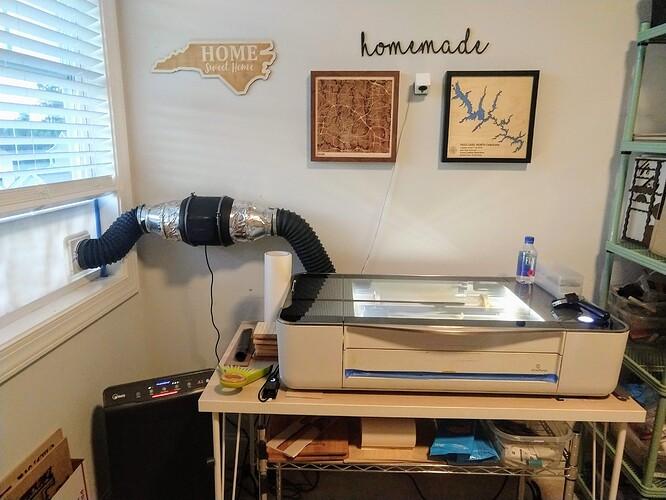