Refurbished Pro won't cut all designs all the way thru

I had so much great help the last 2 weeks trying to get my original GF Pro to engrave and score properly. THANK YOU AGAIN! Now I have received a refurnished Pro and it won’t cut through all the designs on Proofgrade material. So, I followed every step in “Cut Didn’t Go Through Material”, but it still didn’t cut everywhere properly. (btw - the machine I received was quite dirty - I wasn’t expecting that!)

Yesterday, I cleaned the machine thoroughly again - rails, lenses, belts, mirror, etc. and inspected it closely. I noticed a 3/16" knick in the right top rail (see photos below). If this isn’t impacting the machine now, I would expect it to at some point. (I’m quite surprised I would be sent a machine with uneven metal on the rail the wheel uses.) 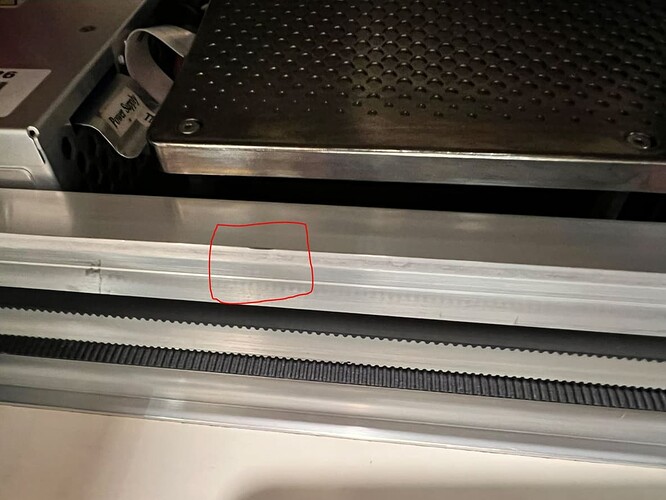 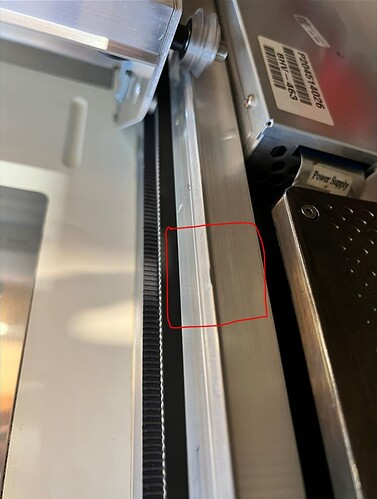 Regardless, after the thorough cleaning, I completed camera recalibration and the alignment test. Both came out well. I then printed the Gift of Good Measure & it was successful too.

I didn’t want to waste another full sheet of proofgrade material, so I used 10x10 uncertified material. I used 6 pins to hold it down on the crumb tray, used the Set Focus feature, set the cuts to the same measurements I used on my previous machine successfully, and completed a print that I’ve done on my old machine. All the cuts went thru except for one item.

I repeated the process with a new 10x10 sheet & new design that was also successful in the past and the same thing happened - not in the same area of the sheet, even though I left the pins in place so this board was pretty much in the same spot as the previous board.

I did it a third time with a new 10x10 and new design that previously worked and it happened again - not in the same spot even though the board was in the same location on the crumb tray. I did it one more time with the same design as the 3rd one, pushed the pins in a little harder and everything cut this time. (of course it worked - I was taking pictures & noting the time so I could submit it to GF support, haha.)

Even though I was successful on the last sheet, something isn’t right with this GF. I really don’t want to waste another piece of proofgrade material unless absolutely necessary. I don’t believe the crumb tray is an issue because it worked fine in my previous machine and hasn’t seen much use.

I’ve sent a request to support but it’s Saturday morning so I won’t hear from them for days.

You have done a great job detailing your problem. When you say you use the set focus and then input cut measurements, did you put in a manual height or do you just mean you put in cut settings for speed and power

I am inclined to think your problem is the material since the Gift of Good Measure and the camera calibration worked and cuts on the other material were successful except in a small spot that was different each time. Makes me think you hit a glue spot or void that was a bit inconsistent in material density.

Check if there’s a difference between whether things cut on the left side and right side of the honeycomb tray. A hard drop during shipping can knock the mirrors in the laser arm out of alignment and cause problems. Beyond that, refurbs come with a 90 day warranty, and that damage to the rail is likely enough to get it replaced outright again.

Thanks for the quick response! I did not enter manual height - only entered cut settings and engrave settings. I am wondering about the material too, although the majority of my issues were with proofgrade materials.

Thanks Dan - on this next cut I’m going to do, I’ll examine the outcome much more closely - especially right side vs left side.

I’m suspicious about the rail too and am frustrated it was sent to me in that condition!

If the scored images that printed in the lid camera calibration are uniform from left to right and top to bottom, chances are your machine is in good working condition.

Well, sadly my newly received, newly refurbished Glowforge Pro has to be replaced. I just received it a few days ago. I now have 2 machines in my house that have to be packaged and shipped back.

I was quite surprised how dirty the refurbished machine was when I received it - Glowforge’s definition of refurbished doesn’t seem to be the same as other companies. I find it surprising that it passed all the tests yet arrived to me needing to be fully cleaned and ultimately needing to be returned for another replacement.

I’m extremely disappointed in the quality of Glowforge and have lost a lot of time and money, troubleshooting 2 machines for the past month. I would much rather get a full refund than go through this hassle again. Unfortunately, I have also lost faith in the machine’s longevity. (My first machine only had about 40 hours of use before it had issues and needed to be sent back to Glowforge.)

With all that being said, I am impressed with David’s responsiveness to my support ticket over the weekend. I wasn’t expecting to hear back until Monday and he has emailed me several times with new things to try.

Fingers crossed on the 3rd machine!