I have just ordered my Glowforge Pro and it’s set to arrive on Wednesday. I’m currently a business owner so this will be a welcome addition to what I’m able to create.

I have a curious question!

I have a jewelry company and I’ve previously ordered gold foiled boxes from other companies, now I’m wondering if this machine could also do the same? I’ve read that there is laser foil, but (due to ignorance) I’m wondering if the laser can be adjusted to use regular gold foil from presses?

ROLAND has a laser designer machine that uses a class 1 laser to heat the material to bond to the substrate. I’m curious if the lasers are similar or could be adjusted to be similar to do the same?

Anyone with some knowledge about the possibilities of this theory would be greatly welcomed as it could allow so many to do additional products with gold foil at a cheaper cost and allow other items. Maybe even foil printed art?

Thanks for your time!
Kyle

Being metal i do not think the glowforge will be able to cut them at all. The wavelength it puts out reflects on metals. Being so thin tho i dont really know for sure. If you end up testing it I would be interested to see the results.

There has been discussion on this.

So I think it’s a maybe. I found this: It was the only place I could find that showed how it actually works. If you don’t know it requires a special film that heats up when hit with the laser. Essentially a very localized heating effect that transfers the foil. Cool idea. That being said: this doesn’t appear to be a CO2 laser. I suspect diode but maybe fiber. I’ll leave it to someone else to figure that out. The point is that I’m not sure if the heat film will be activated by the waveleng…

Yet another new maker toy Everything Else

…although I don’t expect many of us will be interested (for one thing: msrp is $13k). What I’m interested in is, how does the thing work? And can we use the laser foils in our GF?

A quick forum search for “Roland” would have found this and maybe more.

Yes, I know, and I already did a “quick forum search” - thanks.

I’m looking for new additional information or experimentation, not previous conjecture and referral.

I’m not attempting to cut metal, I’m looking to see if the laser strength is able to be adjusted to cause heat in focused areas to transfer gold foil that is typically used with a traditional brass plate heated press.

those topics were closed almost a year ago

For a reason: it was iffy at best and probably a dead end. Roland’s foil tech most likely hasn’t changed, they still sell the same machines. Nobody has mentioned it here since as far as I’ve seen.

Good luck, if you try it I’m sure we’ll all be interested. My conjecture didn’t lead me to think it’ll work or be practical, but you apparently knew that from your research that led you to this point.

But to reiterate, since you may have missed the clearly speculative punchline: you generally need heat and pressure to use these foils and the laser just can’t do that. Give it a whirl and impress us all if it works, we love a good new process.

While I would not suggest mercury gilding (a real pity the process is so poisonous) the traditional use of gold leaf on sculpted shapes would be a real possibility and would be done after the laser was involved.

Hi guys, I’m Shaena. I usually pop on to just view the boards (you all are amazing and so inspiring!), but this is my very first time posting! Hoping I can become a regular

I made these earrings last night as “table mate gifts” for a conference I’m going to in Chicago next week. I wanted to celebrate the gorgeous architecture of the city and immediately thought an Art Deco pattern would be appropriate! These are thin (3/16") cheap wood blanks - I think birch? - that I painted go…

that has real possibilities after the wood has been deep engraved and sanded to a high polish. I used Oak and the grain is so strong it just looks like very nice wood I suspect hard maple could do better, but never as gilded as using gold leaf, 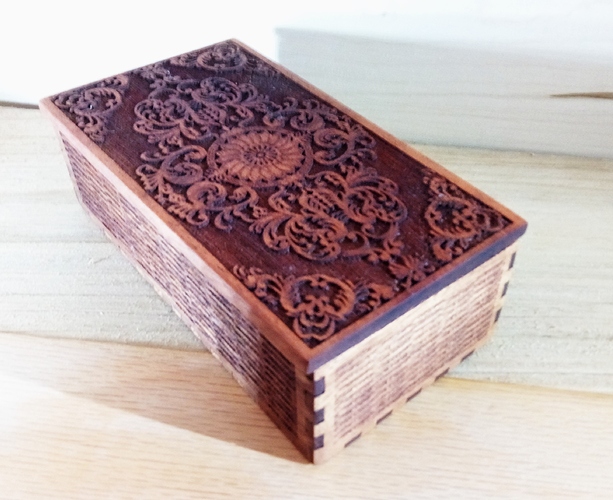 Done in Maple rather than something where the wood itself was the point, and a good burnished gold leaf and velvet interior would be very much worthy of a nice jewelry store,

This video sponsored by Greylight May shows an interesting technique for applying gold leaf and engraving over the top. I thought it was really nice.

I’ve not missed anything. Thanks.

I’ve not missed anything

Says the guy who had been on the forum for literally 7 minutes to the guy who has read for… *checks notes* an embarrassingly long time.

Not to make an appeal to authority argument, it is possible that I might have missed something, but if someone points to a post where this was explored and tested I’ll be very surprised. I keep a pretty close eye out for stuff like this.

Anyway, glad you’re here. Sincerely, welcome to the community, I look forward to seeing what you make.

A quick google shows mainly paper box types that, even the fanciest are more suitable to a Silhouette or Cricut than a Glowforge. I made gold and then silver jewelry for many years and have thought of ways the Glowforge would have been handy in those days.

Trying to compete with things available under a dollar each using a Glowforge does not seem a great way to go, so was not thinking that way.

Well I was going to reply directly to @kwt52, but he/she/they aren’t accepting direct messages at this time, maybe blocked me? A reply in the open it is, then.

Your last reply to me is discouraged by the forum policies, which are available in the FAQ. I’m not going to take it any further, but I’d suggest you read it before someone flags your posts rather than replies directly.

To quote, under the heading “Please avoid”:

I think the reasoning there is that what you perceive as a certain tone may well not have been intentional, so replying to the tone doesn’t often improve things. Try to stick to what was said, which was “here’s a link to some previous discussions on the topic”.

You could make a case for my pointing out your tenure on the forum as an ad hominem attack, and if it felt like that I apologize. My intent was to illustrate that If either of us has missed a post, it’s less likely to be me, I participate in the forum a lot.

Here’s the link to the faq, in case you have not read it yet.

Anyway, I’m sorry we got off on the wrong foot, maybe we’ll patch it up someday. I really do hope you try out that foil and report back, it might be cool. I suspect it won’t work, but I’ve been wrong before and you sound like just the person to try it out.

If the foil is actual gold, don’t use it. Gold is highly IR reflective, as is copper, and it will reflect the laser back into the head and damage it.

Thanks Ben!
It’s not actual gold, it’s the same gold foil that is used in heat presses for stamping things like gift boxes, journals, and things like that.

I figured there might be a way to use it but it seems like it won’t be possible.

At this point I don’t even know why I bought it as I don’t think I’m going to be putting it to much use. Oh well.

I had a bucket full of those foils that I never used, and eventually wound up getting rid of…they are foiling on a poly background, and could be tested for use (copper flame test) in the machine if you used a masking on them…BUT…they work a different way from the foil designed to be used in lasers, so I don’t think they would work well for this.

There is a product that can be used to give a foiled effect in a laser. It’s a bit pricey, but everything is these days. Make damned sure you get the correct number when you order it, most vinyl products contain PVC which will eat the machine. (You want to make sure the film is polyester and not anything containing PVC before using it in a laser.) Note: And this is not directed at you, it’s directed at anyone who might be reading this down the road.

The way you use it is to dial in your settings, score the design and weed the unwanted area. (So it’s slow.) Its also a good idea to mask it first to prevent reflection, so it’s even slower. Or you can engrave away the unwanted areas - that’s the slowest, and I wouldn’t recommend it for a cardboard box. But it does give a (6-year wear) permanent beautiful foil effect that is surprisingly sturdy and looks just like the results of the old-style foil stamping.

If you have a bunch of boxes that you need to do, you’ll spend less time just ordering them done up for you. But if you are looking for some laserable foil for a cool effect on a wood jewelry item, that’s the stuff to use.