I did a not-so-smart thing with a power saw a while ago and thought I ought to remind myself to not do those things in the future.

I created the files in InkScape and used PowerPoint or something to generate the script, from which I created a bitmap copy. 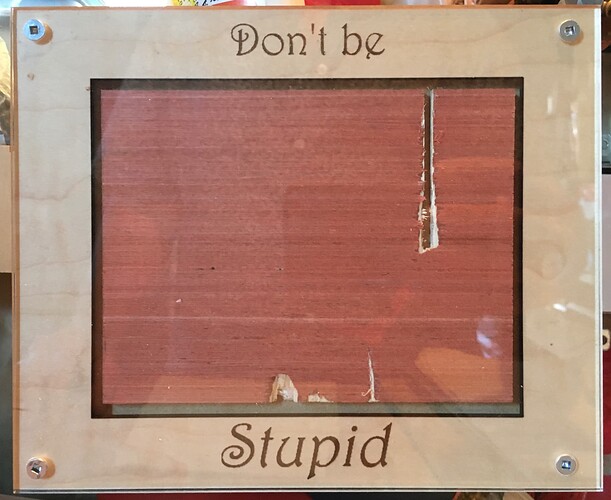 image1920×1569 163 KB
I cut out a back, a spacer edge, the face plate, and the acrylic plate. I used a stepper bit and drill bits to very carefully drill the counter-sink and pilot holes for the screws. Cracked it the first time so had to cut it again. Probably could have cut the pilot holes with the gf, but didn’t.

Anyway, note to self: don’t be stupid.

I like it. I have been known to leave myself a gentle reminder… 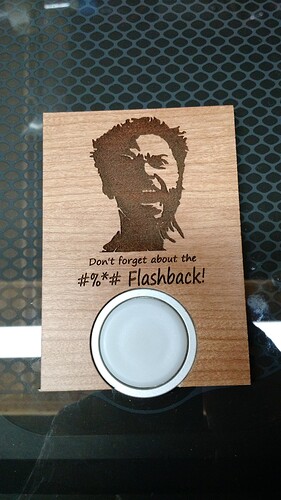 Of course, we feel foolish when we do something like that, but failure is our teacher - however, it seems I normally have to take the lesson several times before it sticks.

But did you stick your thumb into the blade? I hope not cause man that hurts.

Not that time… thankfully. I figured it served as a good memento mori of sorts.

After the third time I took my drone somewhere and couldn’t fly it. 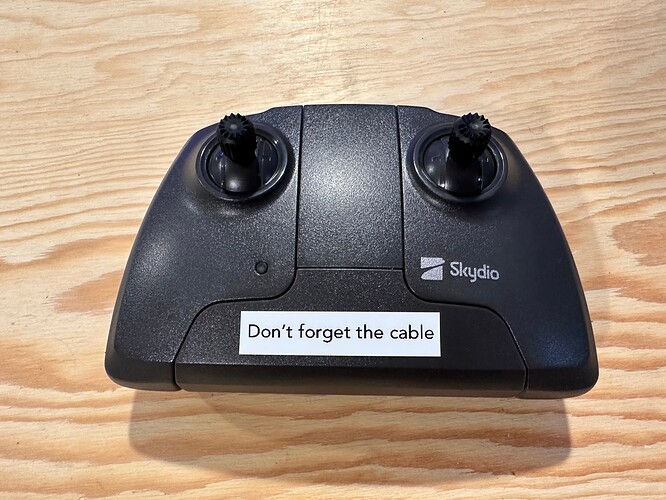 Something needs to go somewhere else in the house, I put it on the stairs so I’ll trip over it.

I’ve been looking at that drone. The performance I’ve seen in terms of obstacle avoidance is impressive. What is your experience with it overall?

Not if you have a SawStop

But did you stick your thumb into the blade? I hope not cause man that hurts.

Not if you have a SawStop

I kept looking at it too…but I think I’m going with Autel instead. It’s been a lot of back and forth with me, but on the edge of purchasing…just need to make that final leap.

They have some compelling deals.

No SawStop , the tool is old school and so am I. Learned to ride a bicycle as a kid without a helmet. Drove cars for years without seat belts. Tested the actual top speed of all my cars and motorcycles. Boated without a life saver. Lived in houses without smoke alarms or carbon monoxide detectors. Shingled roofs without fall protection. Crossed streets that didn’t have flashing lights and walk signals etc.
I can imagine you’re cringing by now lol.

Same here. Pay no attention to the scars, life has been good to me.

I’ve been looking at that drone. The performance I’ve seen in terms of obstacle avoidance is impressive. What is your experience with it overall?

I’m a terrible drone owner, I’ve probably only flown it half a dozen times in two years.

One was the first time I took it out, when it flew itself into a tree branch and crashed (First flight in the park - YouTube). The obstacle avoidance is not quite as impressive as it seems from their marketing materials: when you get it there are big warnings not to use it around trees, power lines, etc., because it can’t see anything thin.

Not cringing, I think I have a few years on you.
Or party phones, one ringy dingy, two ringy dingy and you picked it up even though you were three ringy dingy. After all it was a “Party Phone “ and someone might be having a party.

Or the “Great Depression “ where I had to eat my cornflakes with a fork so my younger brother would have milk for his cereal.

That’s right, when I was a kid we had one of those party lines as well lol. Our phone number was something like J3 if I recall correctly. Calls went through an operator at a switchboard somewhere.
Leaded gas.
Lead based paints.
Bought firecrackers and 22 bullets as a kid.
Kids could run to the store and buy a carton of cigarettes for their parents.
The good old days lol.

Lol this is hilarious!

So true! However, the replacement brakes and saw blade ain’t cheap. I accidentally tripped two, once with a miter gauge fence (no contact, just too close I guess) and once with some picture frame material that was wrapped in some kind of conductive material. Now when I cut any kind of framing material that is not pure wood, I run it in bypass mode.

However, the replacement brakes and saw blade ain’t cheap

Neither is a trip to the ER!

Neither is a trip to the ER!