I am looking for a replacement for the ribbon cable in the right rear of the unit that connects the white hinge circuit card to the control board. The contacts on my cable are corroded (probably due to my cleaning of the lid several months ago). I’ve tried cleaning the contacts with alcohol and that helped only a little. I hesitate to clean with anything stronger for fear of doing more damage. I tried to purchase a cable from Glowforge support but they say that they don’t have a way of getting me a replacement. I can’t seem to find this cable offered by any of the various used parts sellers online. Does anyone know where I might be able to purchase this cable?

I don’t know where to get that cable, someone else might.

Can you post a photo of the damaged cable? Maybe we can offer advice on restoring it. 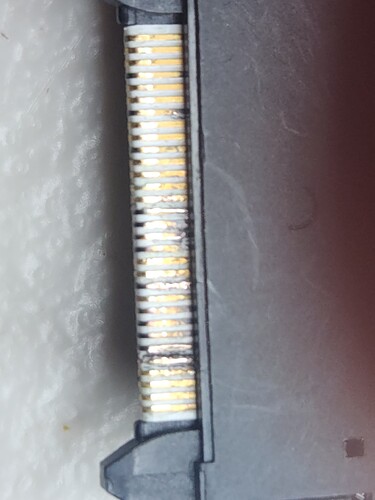 what do you mean glowforge has no way to get you a cable ?

Thats the way they phrased it. See the excerpt from the email exchange. I imagine it means that they have cables in their manufacturing line but none at their repair facilty.

The contacts on my cable are corroded (probably due to my cleaning of the lid several months ago).

Corrosion is usually more commonly caused by using the machine to cut or engrave materials with chlorine. Glowforge is pretty good at keeping all parts needing common maintenance available and easy to clean. When you cleaned the cable a few months back, was it from glowforge requesting you to and sending you instructions?

One of the members offered to sell me a used cable so my issue should be solved once I receive the cable from the member here and the white hinge circuit card from Glowforge.
I believe that the corrosion is due to me accidentally getting cleaner on the circuit card when I tried to clean the lid.

My problem is that the unit reports a lid open error. I believe that the problem is a result of my attempt to clean the lid. Several months ago, my unit failed due to the stress on the shorter black ribbon cable. Since I had to replace the black cable, I thought that it would be a good time to clean the lid. When cleaning the lid, I accidentally got some cleaner sprayed on the white circuit card but I installed the new black cable and the unit ran fine until recently.

I confirmed that the lid sensors work properly when the lid is closed. I then traced the lid signals through the cables to the white hinge circuit card and confirmed that the signals made to the rear of J2 on the card. But the signals didn’t trace through the cable that is plugged into that connector. When I removed the cable, I saw that the pins on the cable and on the circuit card were corroded. I cleaned the contacts with alcohol and the behavior changed somewhat. Instead of the LEDs going dim during power up, the LEDs would flicker between full brightness and dim. So, it appears that after cleaning, the contacts are now intermittent.

When I emailed with Glowforge, they wanted me to send the unit in for repair but after several email exchanges I convinced them that I knew what I was doing and they agreed to sell me a replacement white hinge circuit card. But they stated that they don’t have a way of getting me the cable, which makes me wonder how they would have repaired my unit should I have gone through the trouble and expense of shipping it to them.