I just did at cut at 2:10pm CST 2/14/18 of some basic shapes for my wife to paint. The cuts of the first 3 images went perfectly, however, once it got to the Egg Shape the laser went into a cut-loop. The GF cut the Egg then continued on the same path to cut it again, I let it go then once it finished the second cut, the loop continued and it started cutting the 3rd pass, so I opened the lid to abort.

Had I not been there to open the lid I fear it would have looped indefinitely. This is a huge concern for me as like a lot of my fellow Glowforgers I typically leave my GF alone while it cuts (especially on larger projects) How many loops and would this wood eventually caught fire we will never know.

Please pull my logs and find out why this loop happened, so we can fix whatever bug caused this error to occur. 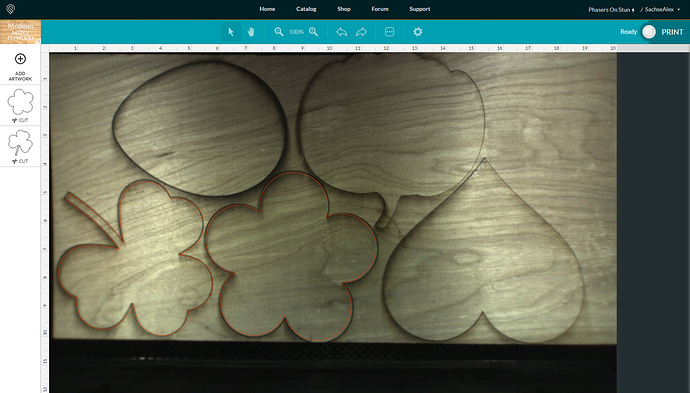 I don’t think it can loop indefinitely because it has a finite buffer. The most it could do is about 3.5 hours!

Are you sure you don’t have multiple outlines on top of each other in the artwork?

Sure, Here is the Egg file it was stuck on.

There are actually three paths stacked on top of each other. The GF was doing exactly what you asked.

WOW… Thank you! Well I love these quick fixes… I’ll close this one out.

In the case of stacked vectors, you can select the shape, make sure it isn’t grouped, use your arrow key and bump it to the side to see if there are any copies under it. Another way to check for that is to switch the view to ‘outline’ and zoom way in.
When I first started using the pre-release machine I made several error reports to support only to discover it was a problem with my file, not the machine.

Another option is to select all, set a fill, then set opacity to 50%. If you have stacked shapes, you’ll instantly know it, they’ll be far darker than their compatriots.

Undo-undo-undo until you’re back to where you wanted to be and go about fixing any that you found.

Note, if you are using lines and/or open shapes [where fill doesn’t apply or acts weird], the opacity trick still works, but you will have to look a bit more closely.

The GF was doing exactly what you asked.

But it wasn’t what he wanted…

Not uncommon here. I’m just surprised that people don’t do a bit of looking themselves before pulling the cord to call in help. I have found the best course of action is to assume I’ve done something wrong and it’s a search for what that was.

One of my tips to my laser students is to just try stuff - worst that can happen is something catches on fire and you get a little cardio workout before you put it out. Some of the best lessons learned are the ones they find on their own.

worst that can happen is something catches on fire and you get a little cardio workout before you put it out.

ROFL! I prefer my cardio on the orbital machine thank you!

I prefer my cardio on the orbital machine thank you!

That’s non-productive. You add equal minutes to the end of your life for every one you spend on the machine now. It’s likely that those minutes won’t be as usable as the ones you’re redirecting to mindless tramping on the machine now

(Although it is entirely possible I’m going to have another view of the worth of additional minutes when I’m 90, but I’m thinking that those are not generally the most productive of times for most.)

That actually makes perfect sense, but I’m realizing that I don’t care so much about extra minutes at the end of my life. Chances are I won’t be doing that much math and I’d rather feel good now when I can still get around. Nice try, though!

I’m realizing that I don’t care so much about extra minutes at the end of my life. Chances are I won’t be doing that much math and I’d rather feel good now when I can still get around.

Of course when I’m in my 90s I may regret that but with everything else I’ll be regretting then, lack of exercise created additional life minutes is likely to be at the bottom of the list

Thanks for the help @jefish! I’m going to close this thread - if you run into any other trouble, go ahead and post a new topic. Happy printing!