I got excited about Richlite when I saw this post, and decided to look around for a bit of it. One of the suppliers, ecosupplycenter.com, will send you free samples, so I ordered some of their material from the Northwest series in Black Diamond color. The samples came today! 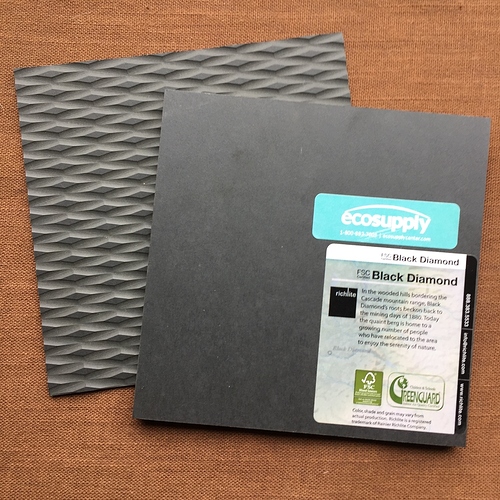 They are about 6"x6", enough to use for a test piece. I had actually asked for some of the brown as well but didn’t get any. The labeled piece is 8mm thick and the diamond-cut piece is about 3.25mm thick. It’s really nice, dense material and I can’t wait to try it out.

I’m thinking this stuff will be great for award bases and similar items.

You got some?! Ah man I really wanna try it. It looks incredible. Gonna order some now! Thanks for posting!

Thanks for the link! Ordered samples. Trying the cork too.

I have a banjo with the fretboard made out of Black Richlite. It’s very hard almost ebony like. Be interesting to see if the Glowforge can get through it.

did a little research. From what I can find, even a 100W laser has quite a bit of difficulty with that stuff. I’ll try to find the article I was reading before, make sure I’m not confused.

Thanks; ordered a sample!

Ordered two pieces, but with no risk. If it doesn’t work out on the laser I can still use them for making a banjo neck the old fashioned way.

Edit: Received in one day from Richmond VA. It is very heavy compared to similar sized ebony. Doubt very seriously if the Glowforge will be able to cut it but I’ll sacrifice a piece later in the week for a go at engraving.

Hi @cynd11, again, thanks for the info. Did you only get the two pieces?
The pic shows what I received today. The only thing I didn’t get was cork. I asked for cork and the black diamond and I received an 11 pound box of goodies!!
My wife is now trying to get more!! 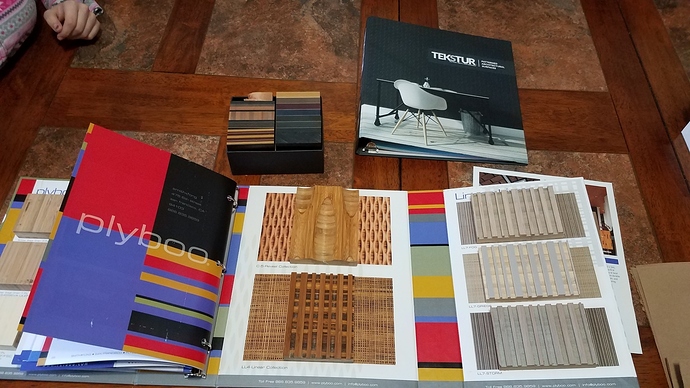 Holy smokes, you got way more than I did! I only got the two pieces, and it took nearly 2 weeks. I wonder if it is because I am not in the sales territory for ecosupply. If that’s the case, I guess I’m lucky to have gotten any samples at all.

The box at the back of the pic is filled with 3x3 pieces. Plus the binder has samples. I was shocked!! I expected the same as you got!
I’m really interested if this is laserable. It’s nice stuff!

Did you order under a business name?

With what they sent, I got the feeling they want me to distribute! Lol

Well, if that stuff works well in a laser, you may have opened an avenue for them.

Wouldn’t be a bad thing!

Oh, maybe that’s the difference–I registered as an “artist.”

I think I put down designer, but listed my business.

Bad news. Only able to cut through maybe 1/32". I used the same settings that cut completely through the .43" Walnut. And the line was not all that visible in contrast from above. Used .338" black Richlite.