The first Glowforge I received had to get sent back immediately; the glass top was completely shattered. While I was working with the support representative, I mentioned that the metal sheet on the crumb tray I received seemed to be bent downward on one side and included a picture. I specifically said I wasn’t sure if it was intentionally shaped this way, or of it was also damaged in shipping, but the tech said it was a defect and sent another one.
I just received the replacement, and it has the exact same problem, so is this how they’re supposed to be shaped, or is this one also bent? I searched the forums already, but didn’t find anything relevant. 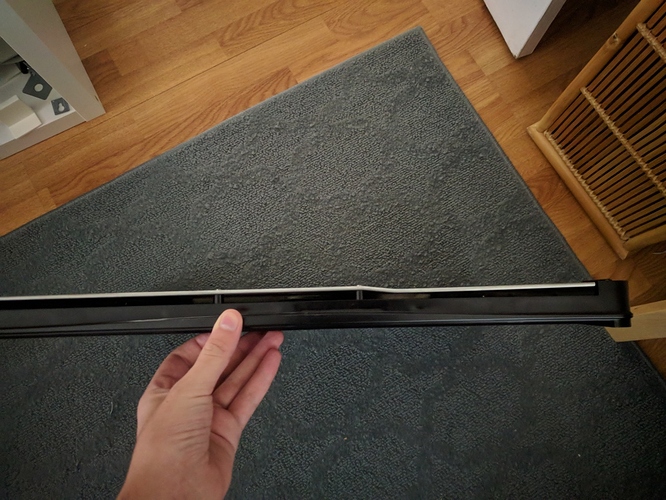 Looks like if you stay to the left of that support screw you will be able to print with it until they can get you a new tray.

If the pics match, recurrent damage like that would suggest a factory issue rather than shipping damage. Doesn’t prove it, but the odds of an exact match are pretty tall for that to occur during shipping.

Like, quit parking the forklift on the crumb trays…

I figured it out.
GF sent the new tray without requesting the old one back, so I have both, but they sent the boxes to an old address. The person that brought me the box had opened up everything and re-sealed it all with tape, including the box with the bent one. I thought I was opening the new box, but I opened the old one with bent tray.
I found the new box, and that one is perfectly straight upon first inspection. My bad.

Understand it was the wrong crumb tray in the picture but not sure it even matters. Unless I’m looking at the picture wrong the bend is on the bottom metal shield of the crumb tray. The tray rests on the plastic feet not on that metal plate. The crumb tray would still be flat and level on top.