Set Focus not working - too short or too tall error message

Fixed my “set focus” issue after MONTHS of arguing with the assholes at glowforge. They told me I needed a new $580 laser head, when the issue was as simple as cleaning a lens. Since the refused to honor their warranty I decided to try a few things and cleaning the lens worked 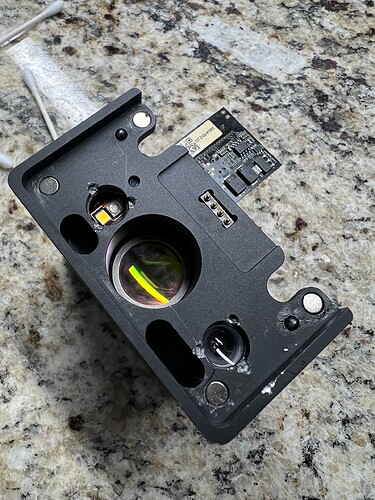 Its the lens at the bottom right of the photo. Get a sharp object, carefully remove the silicone glue from the 3 glue points, and work the lens out GENTLY. clean the inside of the lens and youre good to go. Unbelievable that Glowforge handled my issue the way they did. I will never buy another glowforge product, Custom service is beyond awful.

Welcome back to the community forum. It’s been a while since you were last here.

If you drop off your car at a dealership with a bad alternator, which do you think they’ll say: we’ll replace your alternator with a new one for $X, or we’ll teach you how to disassemble and remanufacture the broken one?

If you call up Dell about a key on a laptop keyboard sticking, do you think they’ll say: we’ll repair the laptop or sell you a replacement keyboard for $X, or we’ll teach you how to disassemble and remanufacture key caps?

Your print head wasn’t working, so they offered to sell you a replacement one. You always have the option of prying something apart, breaking glued seals, scratching the fudge out of it and maybe it works for some amount of time. You’ve got the right to repair your stuff however you’d like. But no company is going to tell you to do that. Especially now that you seem to be missing one or both of the covers that keep dust away from the camera, red dot emitter and LED on the underside of the print head. They don’t have a purge fan to keep the smoke out like the laser lens does.

Thanks for sharing how you fixed the print head, but I don’t agree with the rest of your rant.

(bravo!) Looks to me like something else may have been going on, as well. Upper right hand corner looks sort of melty.

Get a sharp object, carefully remove the silicone glue from the 3 glue points,

As the silicon glue was blocking the only area that the fumes could not get to, it would seem likely that the crud was on the outside of the lens, though it might be hard to see that. If the need to take out that lens were a thing there would be thousands of folk at least with that issue, and in several years I have not had it or seen others with it. 90% of the time it is only the window on the left side of the head, and the one opposite it that has the rapid build up, it is only if that does not work that I even check the others.

I only wish I had the same amount of problems from a whole list of companies (from landlords to 3D printer companies and beyond)as I have had with Glowforge.

If there is a fix to an issue they should make a customer aware of it, rather than tell them to pay the money for a completely new laser head.

For example: If I had a bad alternator, but taking it apart and cleaning or replacing a small part of it would fix the issue and the manufacturer didn’t make me aware of this simple fix but instead just suggested I buy a new one to put in, I’d be finding a new company to get my alternators from.

I understand that glowforge is a business and the idea is to make money from selling lasers, but the way they handle fixing their shortcomings and mistakes needs some updating.

Trust me, I tried cleaning the outside of the lens many, many, many times with no luck. Popped the lens out and gave it one wipe and it worked.

Except I guarantee no one except maybe some old codger somewhere will do this anymore. No parts store carries component parts for units like this anymore so the repair shops don’t bother trying. It’s easier and probably more cost effective to just get the new/ rebuilt one and slap it in and get the core charge refund.

I’ve taken apart starters and alternators and figured out what was wrong. Parts stores were little taken aback in wonder that I’d done so and marveled that I was right in diagnosing what was wrong…only they couldn’t help as no one carried that level of parts to fix whole units anymore.

It’s easier and probably more cost effective to just get the new/ rebuilt one and slap it in and get the core charge refund.

Also more profitable. I must have replaced the starter on my VW 4 or 5 times before paying the core charge and keeping the old one. Taking it apart I saw some slight corrosion and removed it and it was like new. I figured there was some guy making a good profit doing that same thing, but never from me again.

it’s a hypothetical example, but thank you for your history of working on alternators.

I applaud your initiative and workflow for problem solving. Most people don’t work that way from my experience on this forum but the few people who go under the hood have done much to advance the cause.