[EDIT: When I originally posted, I thought the fabric I was working with was silk… I was wrong. Another member of this forum, @eciv, was kind enough to point out how genuine silk does not behave the way described below. I ran a few fabric tests for silk and confirmed I have some form of synthetic artificial silk. I have yet to determine exactly what the material is - the people in the supply chain that provided me with the fabric also thought it was silk. So for the purposes of this post, I’ve tried to comb through all the ‘silk’ references and change them to ‘synthetic’. My apologies for taking so long to correct this.]

[EDIT: So, how do you know if you have fabric that will behave like the material I show in this post? Given my error in originally thinking the fabric I was using was silk, disqualifies me as an authority on the subject

There are tests to at least provide some clues - look for them at the bottom of this posting. Some of the tests involve burning the fabric - but the point of this post is to melt the fabric rather than burn. My general approach is to start with the lowest beam energy possible: highest movement speed and lowest beam power. Then I ease up the power levels and stop when the cut edge shows signs of decomposition - I’m running a laser cutter, not a chemistry lab. That’s just what I do - you’re responsible for what you do with your GF - use your judgement]

So I’ve been playing with synthetic fabrics, and finding some cool properties. I’m posting some preliminary results and will add more notes over time. If others have worked with synthetics, I’m hoping they can add to the postings here. My focus is on the optimal GF settings to work with synthetics. So here goes:

I started with a tight weave synthetic that’s paper thin: 0.004": 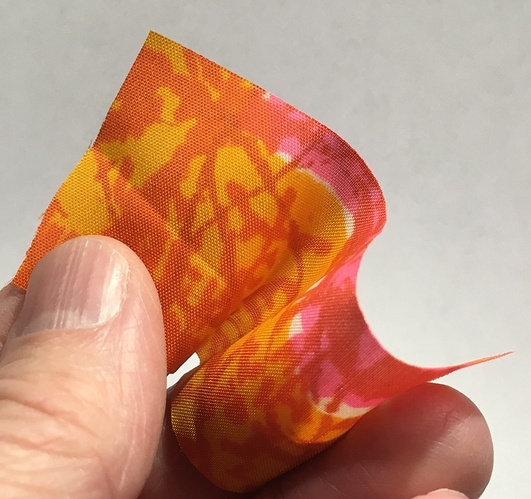 It cuts really nicely - it melts! It takes very little power to cut and leaves a very clean edge. This was cut with the power set at 1 and the speed set at 200, single pass: 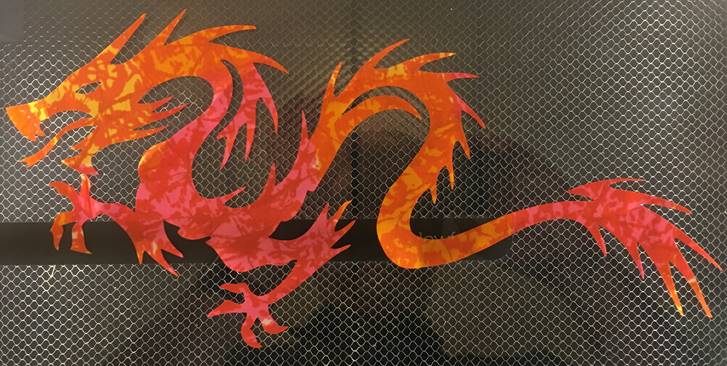 It took a lot of magnets to keep this from flying away as it was cut loose from the base fabric!

Here’s a close-up of the cut edge: 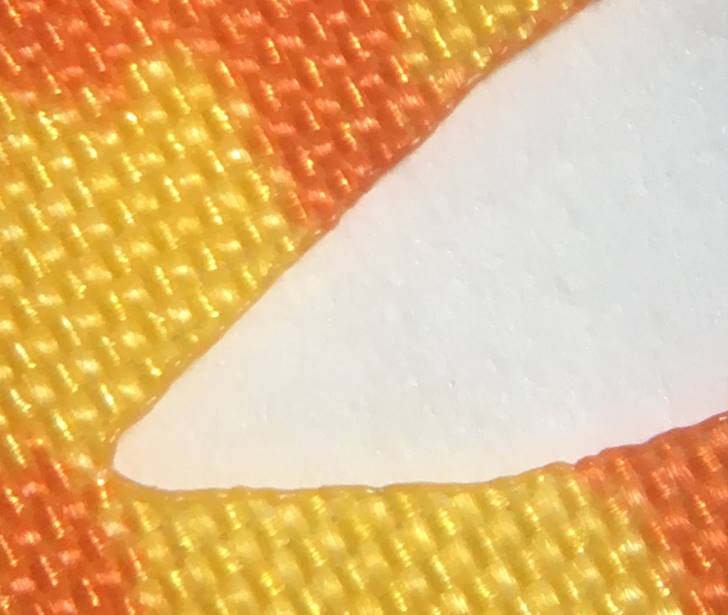 If you look closely, you can see the bead of melted synthetic that nicely seals the edge as it cuts.

That bead of melted synthetic got me thinking… what would happen if I stacked two layers of synthetic?

The settings were nearly the same, with the power set to 1 and the speed dropped to 100. This image shows the bead that was formed between the two layers:

The seam is reasonably rugged, although it is still the weak link when pulling the seam apart: 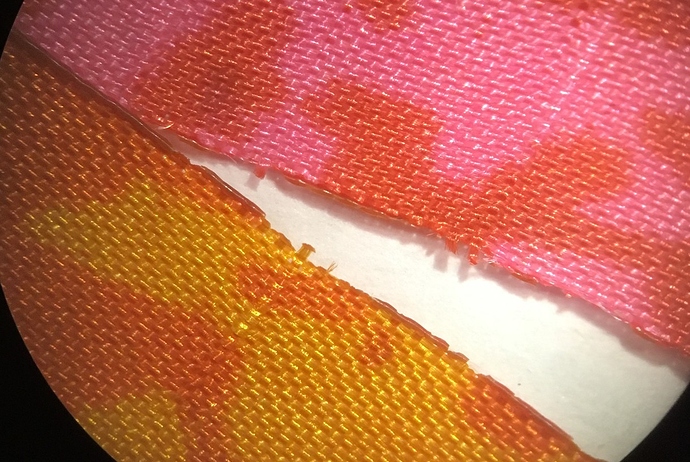 So not only can you cut synthetics cleanly - you can cut and stitch at the same time! I’m hoping readers of this post can start imagining what could be done with this cut+stitch capability.

In case you were wondering, I stopped at 10 layers: 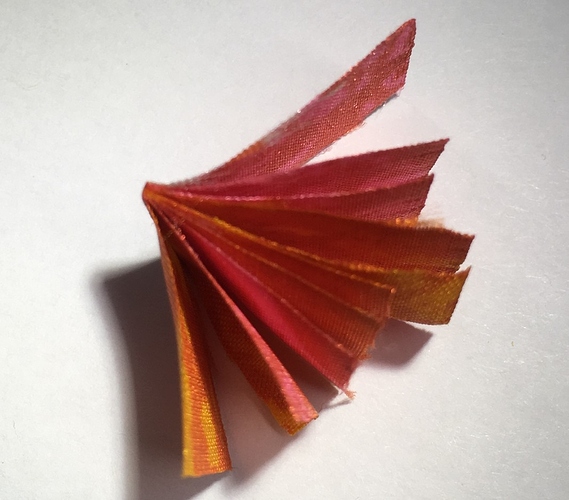 Because each layer melts, the size of the bead will scale up with each layer of synthetic added. I kept the power at 1 and the speed at 100. This shows the edge view of the 10-layer stack:

So there you go. If you’ve worked with synthetic fabrics, please share your experiences here. If you haven’t played with synthetics, I’d encourage you to try. I’d also like to hear any suggestions for other experiments to try, and ideas for what could be constructed with this cut+stitch method.

Brilliant!
Excellent write up too, thank you

Very interesting! This layering is something that would be rather dangerous to do with paper due to the tendency to catch fire. It’s cool that silk does the melty thing instead.

By the way, some folks are adding “settings” in the keyword list for their posting which helps to find posts like this. I’ll add it to yours.

The dragon is stunning in the silk!

We bought the GF to cut fabric for quilting, but when we finally were able to see complete specs, it said you should not layer any material because of potential fire hazard. I also believed this would void any warranty if this caused damage to the GF. I guess I will just follow adventurous souls like yourself and see how it goes.

Another vote for adding the tag ‘settings’. At one point the text ‘(Settings)’ was added at the end of the topic Title. But using the search term ‘settings’ will bring up lots of posts that have that in the body of the post as well. Adding the tag leads to better precision in the search, although one has to use advanced search to do the search.

And posts that discuss settings belong in ‘Beyond the Manual’, so I’ve moved it there.

@AhnoldZ and @cynd11, thanks for the clarification!

I was a bit conflicted about where to post this. The language Dan posted at the head of the Beyond the Manual forum seemed more hardware centric and rather severe-sounding. I didn’t think setting the power level to 1 and the speed to 100 could “cause injury or death”, but I suppose putting synthetics in the GF might qualify.

So, if I’m not using Proofgrade material with the standard Proofgrade settings, then it goes here? Given all the makers and tinkerers that were the early adopters of the GF, I’d expect this category to fill up pretty fast.

I didn’t know about the “settings” tag - thanks for pointing that out. Would it be OK to replace my use of “Recipes:” in the subject line with “Settings:” instead? That way noobs like me might find the topic without accessing the advanced search options. BTW, when entering search terms in the simple search bar, the link to advanced searches says “options”, which I assumed meant something else.

Yep, happy to change that for you if you like.

Once you achieve level 3 participation Discourse automatically grants you the ability to reword titles and shift things to the correct categories for site maintenance.

Anything that discusses specific Settings needs to be here in Beyond the Manual. (It’s our general chat area, along with Everything Else, but we are trying to keep all the settings for non-Proofgrade products in one place, otherwise they get lost over time.)

Yah, that warning makes it sound like if you even peek over here you’re going to grow hair on your palms, and then grow a third arm, which will get gangrenous and then fall off and cause your death. It’s really just the usual lawyer incantation to ward off the litigious ones. The problem is that you can’t control your customers, and some of them might to do something really stupid based on something non-dangerous they read here and claim it’s GF’s fault, and so they need to protect themselves. Just the way it works.

Outstanding. Experimentation is the BEST. Thank you for sharing.

Gorgeous! Something I wil have to try.

When I did fabric a few days ago I attached heat and bond to the back to make it easy to adhere to something else.

Any thoughts about doing this with silk?

Well… Add this to the list of things I want to do!

@kim1032, that’s a good suggestion - is the heat and bond you use permanent, or can it rinse off after cutting?

This is a really big if… but if you can get the silk to lay completely flat on a plain sheet of paper, the edge of the synthetic will stick to the paper as it cuts/melts - kinda like a bead of hot glue: 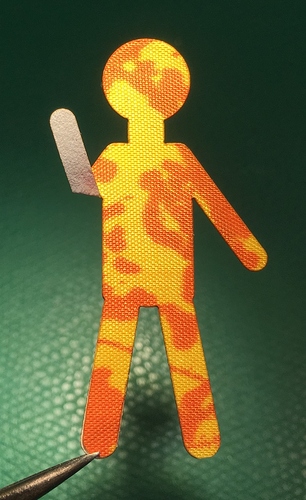 There are all different sorts of heat and bond. I was thinking about double-sided permanent. This would make adhere it to something else easy…but, it would probably ruin the silk, now that I think about it!

I got a roll of TransferRite Ultra 582U, which is a lightly tacky paper tape. It’s only tacky on one side, so once the cut for the design outline has completed, the intense airflow will still blow it loose. So yet something else is needed to adhere the cut sections of the silk to stay tacked down, even after all the cutting is completed.

There’s more than one way to do this, but I use copper tape (sticky side up) as the base. The laser won’t cut the copper, so as long as the copper stays put the cut fabric will stay put.

I always set the power to the lowest setting (1), to simply melt the synthetic, rather than sublimate it into potentially icky gases. The movement speed was 200 and 2 passes, which produces a thinner kerf than a single pass at a lower movement speed, 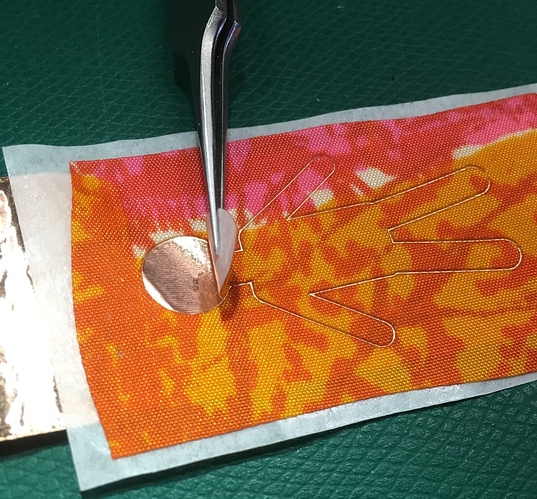 Thanks for sharing your silk cutting tips! What are you making with your pieces once you’ve cut them out? I’d love to see some of your finished work!

Copper is a reflector for the wavelength of a CO2 laser

That is exactly the point

I was looking for a substrate that would resist the assault of the laser beam and not otherwise participate in the cutting process of the synthetic. A substrate like plywood would spew debris onto the fabric and muck up the works - no thank you.

In the post-cut picture above, you can see how clean the kerf looks. The process I describe is analogous to engraving anodized metals, which also produce extremely clean images. I suspect part of the reason that engraving anodized metal is so clean, is because the underlying metal is such a hard stop for the beam, so the cutting stops abruptly once it hits the metal. That same principle applied here, to cutting very thin materials like synthetics.

In retrospect I could have used cheaper aluminum tape, like what’s used for sealing ductwork, but from a safety perspective I think the difference in reflectivity is in the noise - both are very good reflectors at the wavelength of a CO2 laser. I presume the reason I haven’t collected permanent dark spots in my field of vision by now, is thanks to the glass lid on the GF, which (very) strongly absorbs IR wavelengths. Nonetheless, I make a point of always wearing protective eyewear when watching the GF do it’s magic - or just look away - as even the visible-light produced in the cutting process can be retina-searing.

I was thinking more about what is under the glass lid, as in the laser head.