Shocked by new Glowforge, is the frame and bezel grounded?

Short question: Is your Glowforge metal bezel or metal rails grounded to the ground pront on the power plug?

Long Version:
My new long awaited Glowforge Plus was delivered and I was able to fully set it up and test it on the 7th. Everything seemed to be fine, I was able to print samples, run the camera calibration and a few custom test prints.

Later that evening I went out to do another test print, the only difference this time was that I had bare feet on the concrete floor. I pushed the button to start the print then rested my hand on the metal bezel around the side to watch the print. When the laser started firing I was getting shocked, in the brief moments I kept my hand there it appeared to be pulsing along with the laser etch. This was NOT static electricity, this was pulsing current. It was similar to a 9V battery on the tongue, but probably more like a TENS unit on a medium-high setting, just on the verge of becoming painful. Had it been my 9 year old daughter, I’m sure it would have been described as painful.

The Glowforge is setup in our attached garage with a concrete floor. The plug was installed by a commercial electrician, and after being shocked I also tested (again) with a GFCI plug tester to verify that the plug is wired correctly, and the ground is connected correctly, this is not a house wiring issue. I had rested my hand in the same place on previous prints with no issue, however I was wearing shoes and socks so I was insulated from the concrete floor.

I verified with my multi-meter continuity through the power cable on the ground line and the cable is good.

I did some further testing for continuity with my multi-meter and was able to determine that the bezel is connected to the internal metal frame components. The rails, floor, back and bezel are all connected when tested for continuity. They are NOT connected to the ground prong on the plug however, which means that none of those metal components are grounded in my unit. All of those are components that the user could come in contact with during normal operation.

In the back right there is a metal enclosure which looks like a power supply, right in front of where the power cables plugs in. That case IS grounded to the ground prong on the cord.

I’ve attached a couple of pictures highlighting where I am talking about. The metal parts circled in red are NOT grounded. The metal part in green IS grounded. Note, the bezel at the front of the lid is only connected to the rest when the lid is closed.

I’ve contacted support and they got back to me initially right away telling me to stop using it. Eventually they stated that they can only diagnose it getting it back, which makes sense.

What they have not answered in the past couple of days is if their design includes grounding the metal frame and bezel components or not, which seems to me to be key in deciding if I get a refund or get a replacement unit. My estimation is that there was some induction or RF current building up in the frame when the laser was firing and using me as the escape. This is easily solved by properly grounding the frame, but I’m not sure if that is part of their design or not. Is anyone able to test with a meter continuity from the bezel to the ground prong on the plug so I know if it is a design flaw or a manufacturing/shipping fluke? 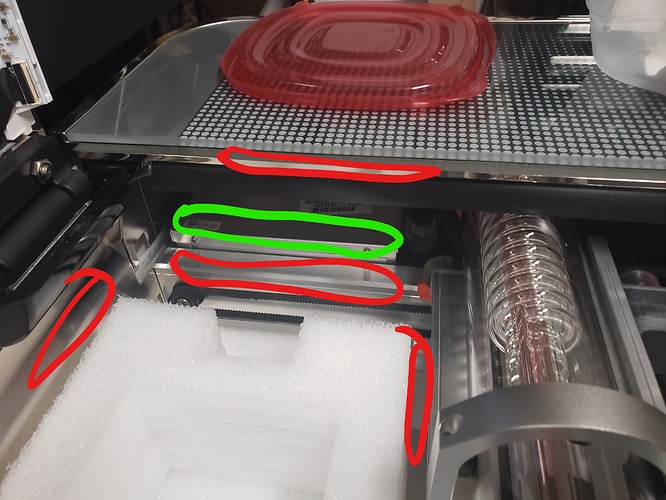 I’ve used mine plenty of times with no personal grounding and have never gotten shocked! I imagine something got missed on yours

Thank you. I had completed probably7-10 prints prior, but like I said I had been insulated by my shoes. I’m hopeful that some either has tested the grounding, or could test that it is grounded so I know for sure.

Hang on, i’m going to take the shoes off and shuffle over… nope. No zap this time.
(I’ve caught a few before, but it’s still pretty warm here. I’ll check tomorrow, after the front has come through.)

Haha…don’t forget to lick your finger and toe first…on second thought maybe a meter is best.

(Totally kidding, but don’t know if I could even find it in the garage.)

I’ve read through your email and this message and what you’re describing is not expected behavior. A replacement unit should take care of it – I’ll reply to your email in a moment to make arrangements.