I just wanted to share a project I spent a little too much time on. How much time? Uh…I started it last year as a gift for Father’s Day. I finished it…recently…yeah…Shouldn’t have taken me that long…but at least I was able to send it off to my dad for an very early Christmas gift.

My dad loves chess. My son loves chess. None of my family stands a chance against my dad. I can’t even beat my son. My son also really loves shogi, Japanese chess. I wanted to make a version of the game that my son and father could play together without having to spend a day teaching every movement.

I designed the pieces to have the name of the character in Romaji (romanization of Japanese words), so that people can get a general idea of the name of each piece without having the ability to read the character.

The acrylic overlay is for beginners to be able to set up the board properly and gives the western role of each piece, like king, knight, pawn, etc. And when you’re confident enough to play without it, it can be removed, and then placed back on as a cover of sorts after the game is over.

The cool thing about shogi is that captured pieces can be used as your own, you can drop them anywhere on the board (with exceptions).

After all the idea planning and testing, it looks really different from how I first envisioned it would (mostly because I was trying to get it all to cut in my Basic without having to use a lot of glue to put together).

Anyways…even with all the help I put on the board, I still lost my first game to my son. 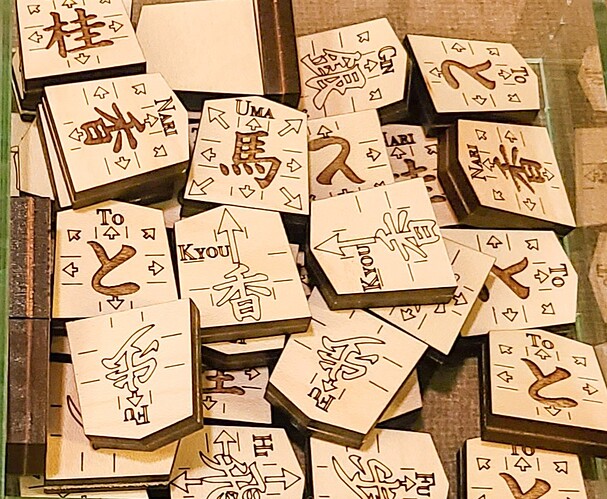 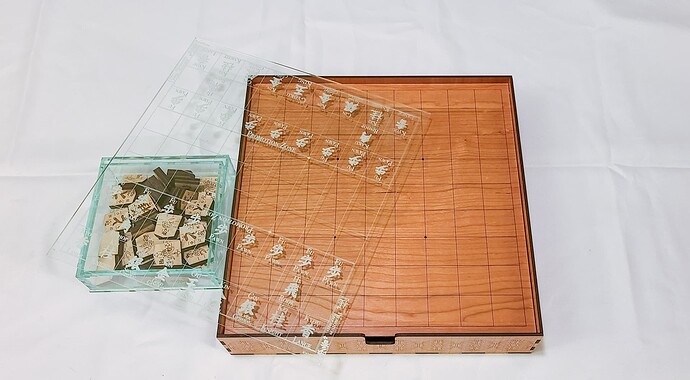 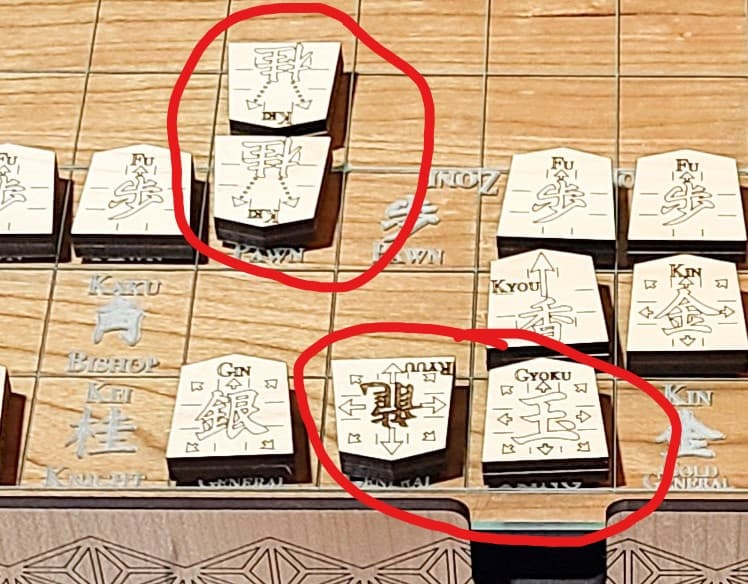 This is amazing! I remember watching old neighbor men playing this game out on their porches when I was a kid in Japan.

I was trying to show my major loss, but I couldn’t get the text in the photo. I seriously couldn’t move anywhere.

I remember watching old men in the parks and on sidewalks in Kyoto and Nagasaki play. I had no clue what how to play but it was fun watching them. I did get some wary glances from them as they tried to figure out why this gaijin was hanging around.

Amazing design! I bet your Father and Son are enjoying this version the most :-).

My dad called to say he got the board, and to prep my son for getting beat in this game too.

This is amazing! I especially appreciate the beginner’s features. Do you have a recommended online primer for gameplay?

online primer? I don’t know what that means.

There are lots of places to look up the rules and strategies. I think there is even a wiki for it. I wrote a booklet with rules and printed it out for my dad. I included it in the catalog submission, though I’m not really sure how that works.

Sure, I was just asking if you had a recommendation for a good beginner’s guide.

Nope! As far as I know, my board took care of all the hard stuff, layout, piece movements…the rest is just the differences between Western chess and shogi.

In shogi, some pieces can be promoted when they reach the promotion zone (the squares just past the dots on the other end of the board). You can flip your piece over to reveal the promoted side, which gives you other movement options.

Other than that and drops (where you put a piece in hand back into play on the board), it’s just another corner the king kind of game.

This is the simplest rule set I can find outside of what I wrote my dad:

FYI, the game is pretty hard for me…which is why I get beat so easily.

The acrylic overlay is for beginners to be able to set up the board properly and gives the western role of each piece, like king, knight, pawn, etc. And when you’re confident enough to play without it, it can be removed, and then placed back on as a cover of sorts after the game is over.

That was a super idea. It’ll really help newbies to the game to learn how to play. I like the cover idea as well - I would need to figure out a way to keep it attached so it didn’t fall off when the board was picked up.

I haven’t had that problem. It’s inset, there is still a bit of wall around the edges. The only way I could get it off was lifting it from the front of the lid. My only regret was not being able to think of a way to put in into the box without changing the size. It would have to be smaller and would need a border along the board to hold it in place. I was trying not to use excessive wood and glue if I could avoid it. 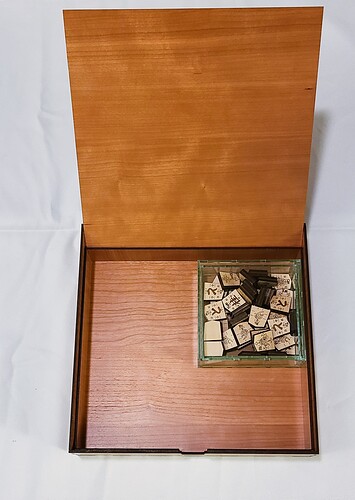 Hmm, I have a border that runs a little over a quarter inch all the way around. I think in order to fit in the box, I’d need to reduce the border for the acrylic to about 1/8-inch all around. I guess I could have magnets, but I’d have to test that idea, and I’m not sure I would like the look of it.

It’s a brain child for sure. Originally I wanted to have a board that folded in half and when I laid it open, it would create the entire board. But I spent way too much time dreaming up hinges and not enough time making my dad a gift.

I guess I could have magnets, but I’d have to test that idea, and I’m not sure I would like the look of it.

I was thinking of recessing the magnets in the acrylic with a filigreed brass tack head glued on top so they would look a little like the top of a brass column and not show the silver of the magnet. The corresponding magnet or small steel pin inserted in the bottom of the wooden board so it wouldn’t show.

Lol, I think that’s too advanced for me. It’s a great idea! I’m going to have to start thinking about how to be more decorative.

This is a really wonderful labour of love, I’m sure it was worth the wait, what an amazingly thoughtful gift

Wow! Years of enjoyment coming from that project. Terrific! Love the Grandpa-Grandson opportunity. A little anticipation building for the match! That will be fun!