I tried to find a thread about this to add to, but I didn’t find one. (I probably wasn’t searching with the right words or something.)

What is the silliest mistake you have made on the GF? LOL

I have to vent because my brain must be on vacation tonight.

I’m laughing at myself so much.

I made a really cool design in Illustrator and was excited to cut it. I made it a little thicker using offset as it is a dainty design. I wasn’t paying attention to the fact that I made multiple copies when I did the offset (and totally forgot to take care of that). So I’ve been working on cutting these…over and over… I couldn’t figure out why it was making so many passes (more than what i put in the cut settings in the GFUI). The wood kept burning. I went through ALL these troubleshooting steps and tests to figure out what I was doing wrong. LOL
I FEEL SO STUPID and I’m still sitting here cracking up.

If anyone wants to commiserate with me, I’d love to hear what silly mistake you have made!

Pah! That was once. Wait until about the 16th time you do it.

Lasering can be very amusing.

I wanted to run a quick leather project, so I thought I’d give that little Magic Braid file a try. I adjusted the tiny hole sizes for the sized brads that I bought on the 5 strand braid file and sent it to be cut. The Glowie cut it perfectly in about a minute and a half. So anyway, popped off the masking and got down to some serious braiding… . . . . Nailed it!…

[image] Decided that one could be improved on a bit so gave it another shot… . [image] After a few more tries (like…

lol Well… I did cut it wrong 8 times before I realized what I did wrong.

So I guess I’m halfway to 16. An overachiever! lol

I’d love to hear what silly mistake you have made! 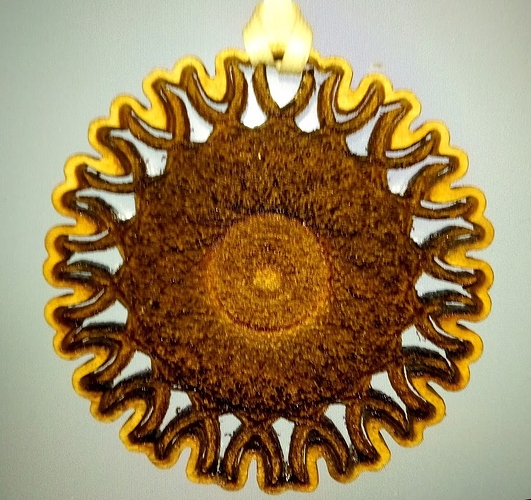 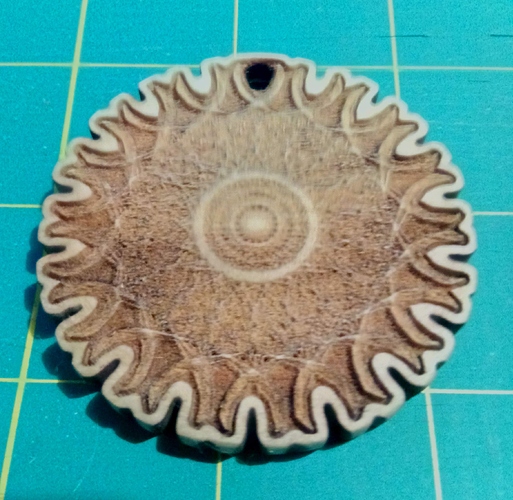 How many times have I started a cut without opening the blast gate? A few smoky times…

Had the PRU machine about 2 weeks and I had the edge of medium ply on top of the ridge at the right side of the crumb tray, and the bottom of the gantry caught on it coming forward jamming it, causing the gantry to detail.
Scared me bad!

How many times have I started a cut without opening the blast gate?

I made myself a little reminder piece of wood I put on the top when I close the blast gate (it says “Blast Gate?”) to remind me to look. The wood piece fits on one side of the gate when it’s open so I can’t close it without doing something with the reminder. Otherwise the reminder would just end up on the desk all the time

Photographic evidence that this problem is not unique to you… 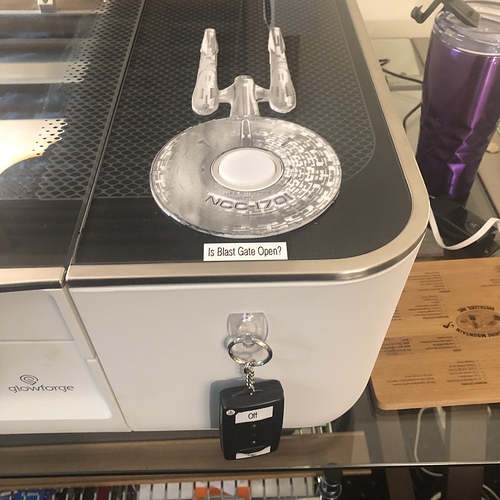 Note the message by my Enterprise… and the proximity of my remote switch for the booster fan at the end of my run (which now also turns on the added inline AC infinity fan connected to the beginning,as Geordi is now in permanent “compact filter” mode.) “Engineering” (my office) has never sounded so quiet. 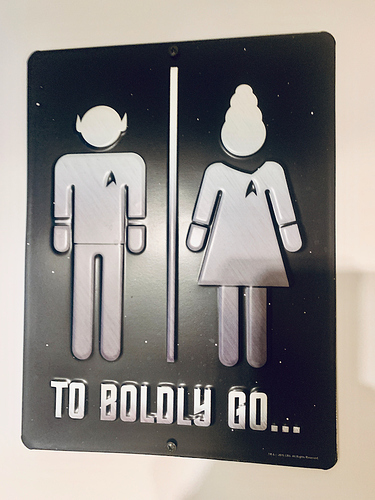 Indeed. Also reminded me of one of my favority comedians, Henry Cho. He’s (IMHO) incredibly funny, and is a Korean raised in the Southern US - grew up in Knoxville, TN.

Drinking (or extreme tiredness) and forging – never again! Too many messed up settings, especially cutting instead of scoring.

Just a bad idea in general…

I do my best work while drinking…

We all do silliness of one variety or another. Myself quite included. Exhibit A:

Sometimes you really ARE too tired Made on a Glowforge

Hi all. I needed to finish up a little “commission” (I’ve heard some of you use that word and I’m not sure what it means. I’m guessing it means “doing free stuff for family”? Am I close? Please let me know) for my sister tonight and, while I’m pretty tired from the day job, I figured I could knock it out. Her boyfriend’s last name is Chambers, and she wanted “something with a demon face and ‘Torture Chambers’ on it”. It’s a ‘thing’ with him… I guess… I don’t know… let’s move on. So, no p…

I still remember Henry Cho on Designing Women. He was sitting between Suzanne and Julia on the plane and they assumed he only spoke Japanese

Current runner-up is putting my lens back in upside down after a cleaning (I figured it out and fixed on my own).

But I think the winner is:
Having left a a small (thin & silver) magnet on the non-ferrous gantry bar and next time the head moved, it slid over and then stuck itself to the silver support block behind the left side of the head–that caused my unit to be stuck on centering! After a few days with P&S trying to trouble shoot, finally found it when I opened the lower door and looked up to the head assembly (with head off) with my nose against the crumb tray–the magnet blended in very, very well.

Done several times, but I enjoy putting score accenting on the majority of my designs. The GF doesn’t differentiate what I want cut vs what I want scored, and will gladly cut scores rather than what I wanted it to do. Plenty of projects have been lost to this. Another big one is having two-sided designs and forgetting to turn off a design element from the first side when flipping the item over. The GFUI used to have a progression preview window that showed the steps the GF was going to go through after you hit Print, but before you pressed the button. That saved me a bunch of times, so when they took it away, I had to become extra careful, which isn’t the easiest thing to do when you’ve been working all day and you’re just getting to the finish line around midnight or later

I miss that, wish they would just make things optional vs. taking them away. Like the dimming of the lights when the lid is opened. That is completely opposite of what I need! I have to keep a flashlight next to the machine because of this idiocy.

The GFUI used to have a progression preview window that showed the steps the GF was going to go through after you hit Print, but before you pressed the button.

I was SO thinking I wish it had this!