The server response is extremely slow this morning. Here is a list of the events of this morning, encountered over the past 45 minutes.

1.) File preparation not completing, continually receiving an error message indicating that the file includes a mask causing the issue.
2.) Confirmed several times that no mask exists, completely dissecting the assembled document to ensure that no hidden mask existed. None were found.
3.) Separated file into three separate files, all were able to complete preparation without any changes being made, an indication that the issue is not the file.
4.) Reassembled file but repositioned all of the parts into a tighter group, file preparation complete. (apparently the usable space has changed, vertical limits have decreased causing the file to be tagged as including a mask). Again, no changes to the file were made other that rearranging parts to better fit vertically, into a template that has been used for every other drawing I’ve uploaded.
5.) Glowforge spent 10 minutes ‘scanning’ before indicating that it was ‘ready’ to print… but it wasn’t ready to print, it just said it was…

6.) Glowforge then spent another 10 minutes indicating ‘ready’ to print without actually being ready.
7.) Glowforge was powered down, disconnected from power completely for 30 seconds before being reconnected and power activated.
8.) Glowforge spends next 10 minutes ‘homing’… 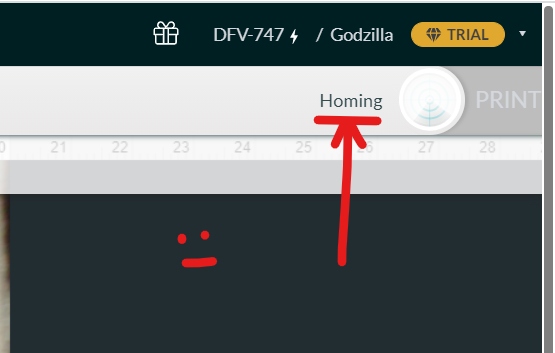 I’ve been having problems with the UI being slow since yesterday, earlier I had to wait almost an hour on the “centering” step, and I’m currently stuck on the “preparing your print” step for what has been about 20 minutes. These are all designs I’ve used many times in the past and it has never taken more than a minute or two from initally uploading to being ready to print. Honestly I’m really glad to hear others are experiencing issues because I was starting to get really worried that it was a problem with my machine! Hopefully this gets noticed and the team is able to figure out what’s going on soon because I have orders that need filled asap

Yeah… that’s why I went with the high word count right off the bat. I’m hearing a lot of similar reports in a Facebook group for Glowforge users, a bunch of people having the same or similar issues for the past few days. I hadn’t had any issues over the weekend, but that all changed this morning…

The “high word count” reports help them to figure out what is going on (as opposed to just hollering that the system is slow, which can be caused by any number of issues) so good job testing it out. (Nice writeup.)

Hopefully they’ll locate it quickly. I ran a job last night and it seemed a bit slower than usual, so something is definitely going on.

For us as customers…while these are temporarily inconvenient, they happen sometimes right before improvements roll out, so they’re generally worth the pain. It’s important when things get slow like this to not rush your job processing though…let it finish doing the little clickety- click thing before you open the lid after a print. That might keep it from locking up.

Mine was slow…it took about four to five times longer than usual…but by not rushing it, it did not hang up. So it wasn’t a half an hour wait, and then having to reboot the modem, computer and machine to unstick everything.

Try to work around it, and be patient with your processing. It helps.

lot of similar reports in a Facebook group for Glowforge users

Looking at https://statuspage.glowforge.com/ can be deceiving at times because it always looks green.
Scrolling down gives more information at times. 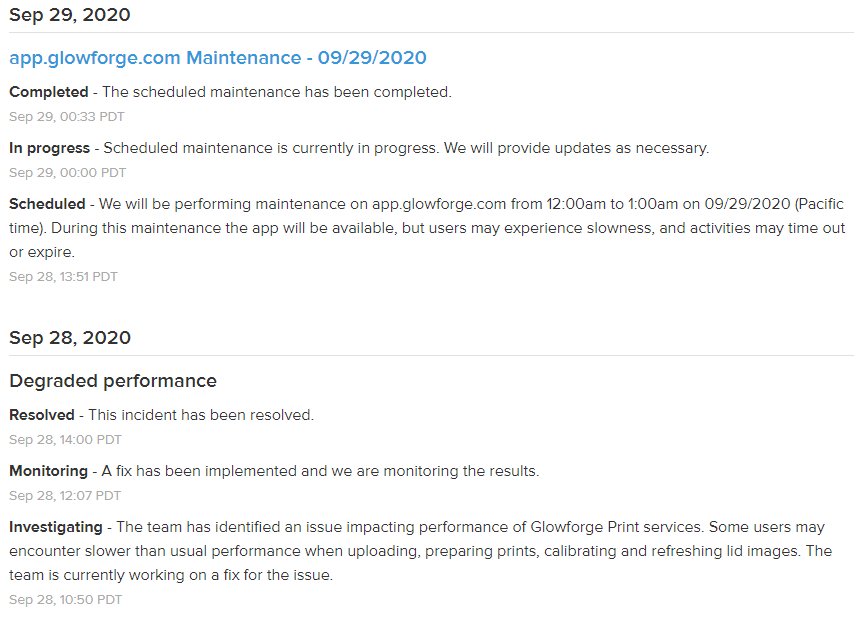 Hello @yoyodyne2112 - I’m sorry you ran into trouble with scanning and homing after all that work getting things working with your design file.

As others have indicated, we were recovering from a system outage at the time of your report and I believe this caused the issues you were seeing. We’ve implemented a fix that should take care of the issue you’re seeing with longer than expected homing times.

Could you please try printing again, and let me know if you’re still running into trouble?

I’ve been printing fine since shortly after posting. Approximately 15 minutes after posting I checked the machine and it was ready to go, pressed the magic button and had no further issues.

Thanks for the replay.

Please let us know if there’s anything we can do to help in the future. Since everything is good to go here I’m going to go ahead and close this topic.