Already reported to Rita but just for transparency, for a practical joke at work, made a sign, but while the sign looks awesome (sorry, can’t post the whole sign as it probably violates some community standard - but trust me if you know the guy this is funny, he asked me to make a sign for his camper/man-cave, and his description sounds more like a serial killer’s den…) I noted 2 small flaws.

Anyway, I scored an inset outline from the outer edge using a rounded rectangle in AI, and noted this tiny overlap in the start/end point of the score. This is on proof grade maple plywood. 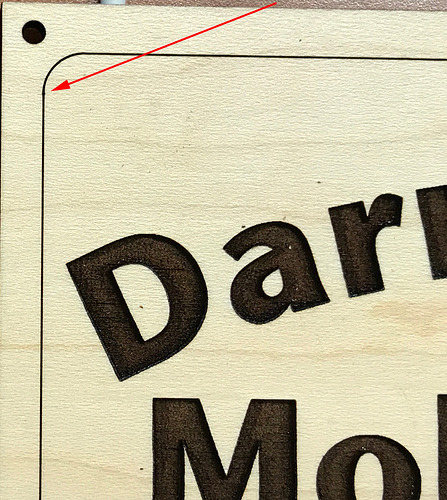 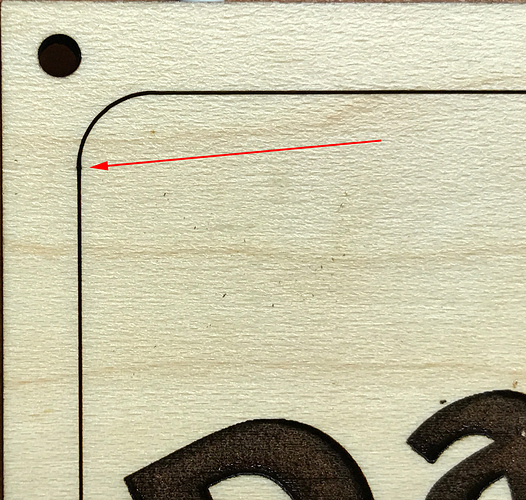 I will add I just reported a second strange error on this document, which was during a linear cut (which was my mistake, meant to score, not cut, but that’s my AI coloring error - need to use brighter colors blue vs. black was stupid on my part), there is what on my 3D printer I would call either a missed step or belt slip, but what makes this strange is it is not in the axis of motion at that point (it was a straight X-axis line, so weird to get a Y-axis motion).

Mind you, these are almost invisible to the naked eye, but given PRU I am looking at things under my magnifying lamp. 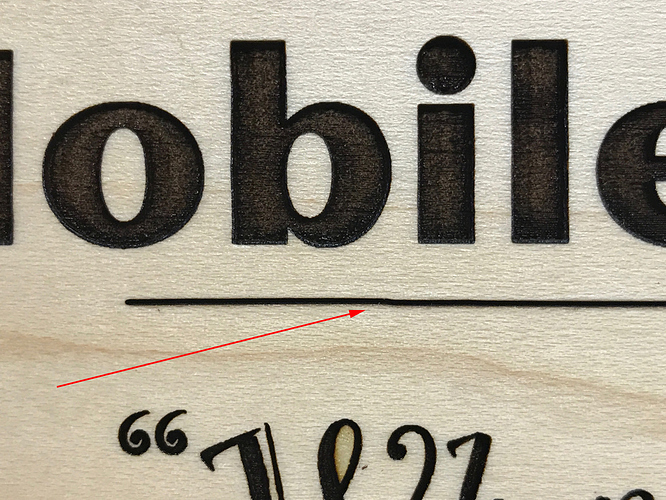 Interesting. The first image looks like the start/stop point. That’s a known issue. Full pew at the start and full pew at the stopping point. I think someone else a couple days ago reported the same issue. The second image post is interesting in the since it was multiple passes and it skip over with all of those passes. This must be a post processor issue (Which I have not experienced.)

Oh, my colleague just noticed the motion error goes through the part, in other words the outer cut and inner score line also suffer (but not in the same locations) the exact same skip. That is about an inch to the right of the prior skip… 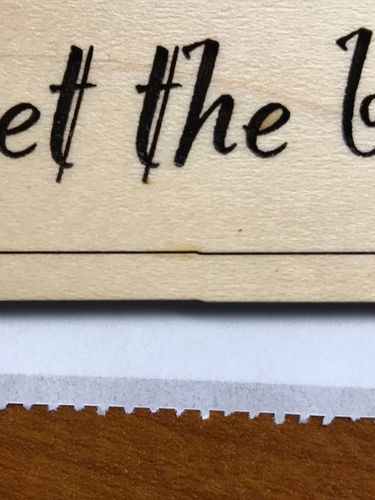 How does that motion error align with the line directly below the word “Mobile” in the previous picture?

Knowing pretty much nothing about what you put into the GUI to get this out that almost looks like a line that was rotated a fraction of a degree in ms paint and you end up with two straight lines with a pixel offset. Wonder what the root of it was

Can we make “pew” an official term? Cause I might have laughed out loud at that usage

have you checked your AI file for the line issue? Some times AI will have a slight angle that your monitor will not show.

Knowing pretty much nothing about what you put into the GUI to get this out that almost looks like a line that was rotated a fraction of a degree in ms paint and you end up with two straight lines with a pixel offset. Wonder what the root of it was

Does MS Paint still exist? Anyway, these were generated in AI and the only problem I have with assuming this is aliasing due to rotation is that these are rectangles and the opposing side does not have it…

What? Ahhh, right.
I’ll stop googling it now then.

Just kept getting this. 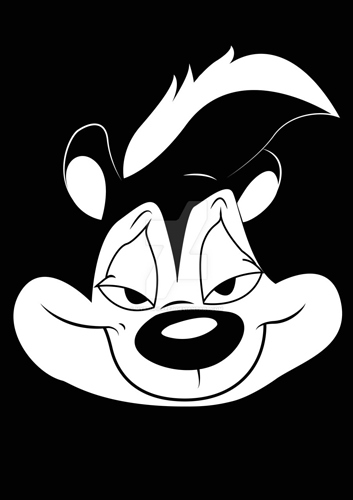 MS Paint 3D is coming out in the next Windows update later this month.

All I can say is, keep those microscopes fired up, and keep sending them feedback! You’re helping us get a better product and I appreciate your efforts.

No, I meant that image was showing the miss/skip about an inch to the right of the prior skip that was in the first pic).

Happens to me aaalllll the time. It’s like the first reply is invisible to me somehow.

It’s like the first reply is invisible to me somehow.

Well especially since the quote appears above your words is not the message you replied to, which is misleading if you don’t look at both the quote and the top right recipient, which is a weird aspect of Discourse.

I wonder if the line just isn’t strait across and it is moving the Y a step to catch up??(looks like more than a step or 2) I work almost exclusively in CAD and whenever I get and AI file into CAD it looks fine but looking really close there is always some funky stuff going on that my post processors don’t take kindly to.
Also when generating tool paths there is always a tolerance call out that the tool need to stay within, if that is set too big for the detail of the project I have seen similar things on our CNCs