The hose is clean…and there’s no filter to be blocked. It’s all clear there.

That shouldn’t look like that at all - the top pieces are solidly attached to the sides. Has this machine been moved around a lot?

Is it me? There’s definitely light right there, right?

The light indicating it’s not sealed is OK, the machine is designed to suck air from kind of all over; others have had smoke leaks and tried to fix it by taping it up everywhere which is not the right move.

So could be pressure, could be that the fan is blowing slower, could still be a need for a good cleaning (your earlier picture didn’t show any obvious blockage, but I’d want to hear from someone who has cleaned their’s a time or two to judge how that looks).

@lightner made a good suggestion, check that setting.

No. It’s been in the same place.

A perhaps rare problem is to check the wind direction. If it is perpendicular to that wall of the house it could build enough pressure to reverse the direction of flow. If that is a rare direction for the wind you just need to wait for a change in direction, 10 or 15 degrees would make a huge difference.

An alternative that takes a few days is to push back more with a Vivosun blower. I have the cheapest one and while it will not do the job alone very well it makes a huge difference as a helper.

The machines aren’t supposed to be air tight - there are lots of places where the air is supposed to flow into the machine (the cracks and the air intake at the lower right side underneath the machine).

Speaking of which - check to make sure nothing is blocking the air intake at the lower right side underneath…if it’s too close to the wall, that can affect it, or if a piece of paper or something got sucked underneath.

No light on this side.

Does anyone think all of my problems would be solved with a compact filter?

Even if it did, you’d be exchanging your current problem for a $250 consumable filter problem.

I would keep looking at the ideas in this thread on wind direction, etc. Adding a booster fan might be necessary, and it would be a much less expensive solution than a filter.

I was able to mostly seal at the window with an old project scrap. I realize this could use some work. BUT…I’m trying to figure this out quickly

Is a booster fan complicated? I’m crafty, not mechanical.

Not really, it is a gadget that goes in between your Glowforge and the hole in the wall, with flexible duct on each side. If your problem is that your exhaust is getting overpowered by what’s happening with the air outside it might be just the ticket.

Do you have one you’d recommend?

I realize this could use some work.

A quart size V-8 bottle (or smaller Folgers Coffee container) is the perfect size to match the 4" hose. if you cut the bottom almost off it would make a living hinge back-flow preventer that would be stable enough to calk into place.

Is a booster fan complicated?

Do you have one you’d recommend?

Nope, as I was lucky enough not to need one. But there are many folks here who can make a recommendation.

Before buying anything though, you need to figure out why you are having the problem. Exterior conditions certainly seem like a reasonable conjecture.

I do believe exterior conditions are the culprit.

This is the inline fan I use. Note that the housing is slightly leaky. I covered all the holes with duct tape. 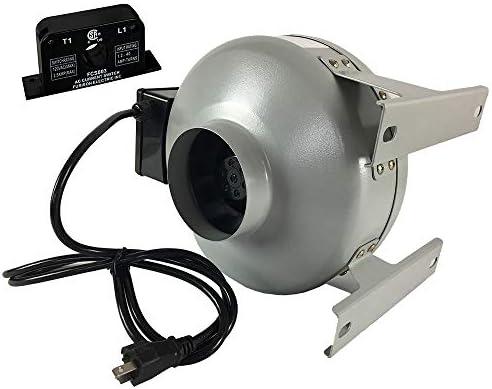 It truly is an inline fan. I cut a 4" hole in a piece of wood to route the outlet thru (using the GF to upgrade the GF). I also upgraded to a flexible, but not soft, tube that wears better when flexed.

To connect to the Glowforge, I got some sticky backed oven seal:

It is almost tight enough that it pressure fits to the back of the Glowforge. Alas, not quite and I use gaffer’s tape to hold it on. Pretty leak free and, better yet, with the inline booster fan, it continues to suck remnant smoke out of the machine long after the job is done.

I currently use this one:

It’s fine for what I need now, and pretty cheap; but not what I want to stick with (the CFM is too low, really). I’m replacing my whole ventilation rig this fall which will involve a much longer run than I have now, so I’ll be upgrading to a more powerful fan. There are a LOT of posts on the forum discussing CFM and run length calculations. The one I have does give some boost and it was easy to incorporate in the initial exhaust so it’s not a bad place to start.

The other advantage of a boost fan, in addition to helping the main Forge exhaust, is that you can keep it running the whole time you’re working, in between cuts. If the pressure differential is impacting your machine fan while it’s cutting it’s probably sucking even more air in from the outside when it’s not running. Two immediate impacts:

When not in use, I disconnect my Forge from the outside vent entirely.

I have been thinking about a fan as well, but how do you manage the fan and your vent? What I mean is, if you disconnect your vent from the window when you are done (I do this also), where do you have this fan? Is it mounted to something? I don’t have a lot of room between my machine and the window (it sits right next to it, in a corner), so I don’t know where I would put a fan if I had one. But I do think it would help, especially getting the smell out after the machine fan cuts off. Also, did you have to seal this fan at all? I saw other posts that said the fan housing might have gaps that could leak.

Oh, and one more thing, do you clean the inline fan when you clean your machine? I would think it might get pretty gunky as well?