I’ve used jigs to successfully do multiples of objects. I had work arounds to reuse a jig once it was taken out of the Glowfoge, but more often than not I would just toss them or cut a new one.

With Snapmark, I will be able to reuse the jigs. I have boxes of 4 inch tiles. They are pretty low hanging fruit, but very versa"tile"! So my first snapmark was a jig for a 4" tile. 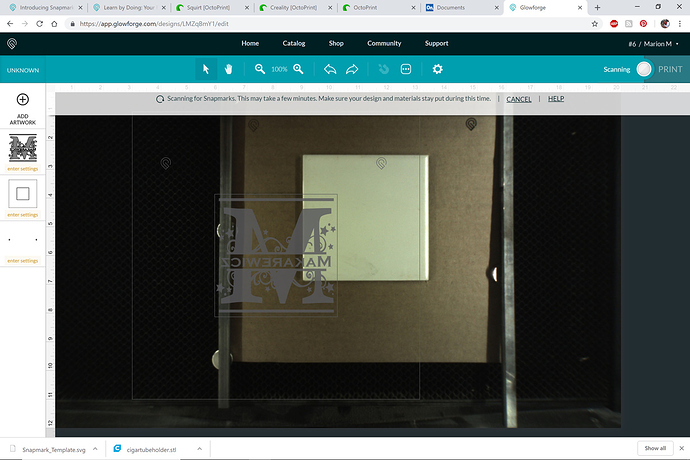 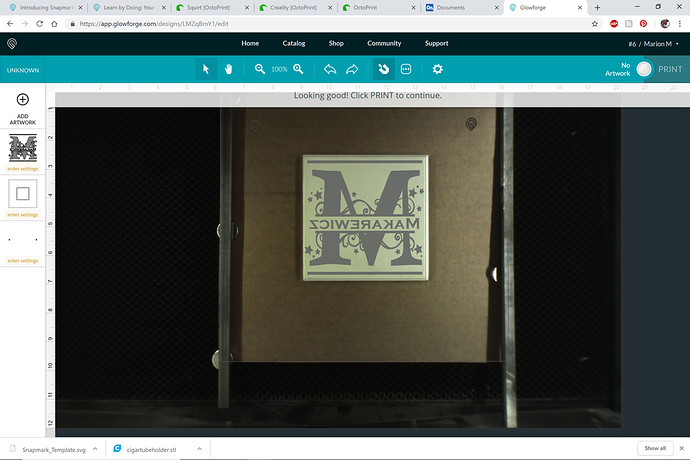 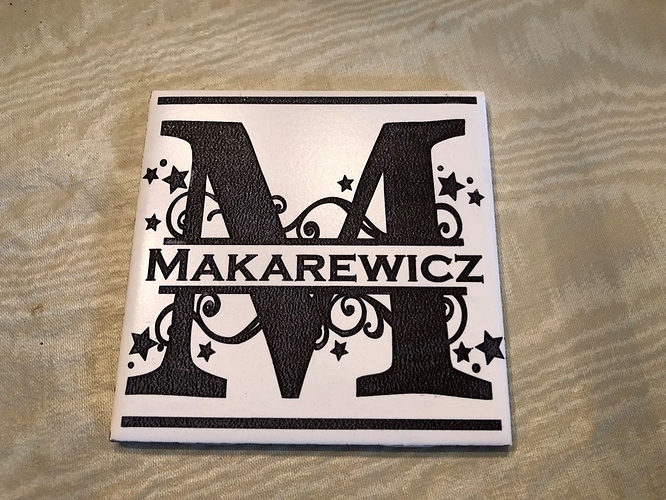 The instructions by Glowforge were pretty clear, but understandable more from having watched @cynd11 use the Snapmark feature. I have the fiducials in the file with the square cutout. Now I can snap that image either with a graphic already placed or adding to the workspace. Definitely speeds up doing a one off tile.

A little more challenging was making a jig for engraving on a glass cigar tube. 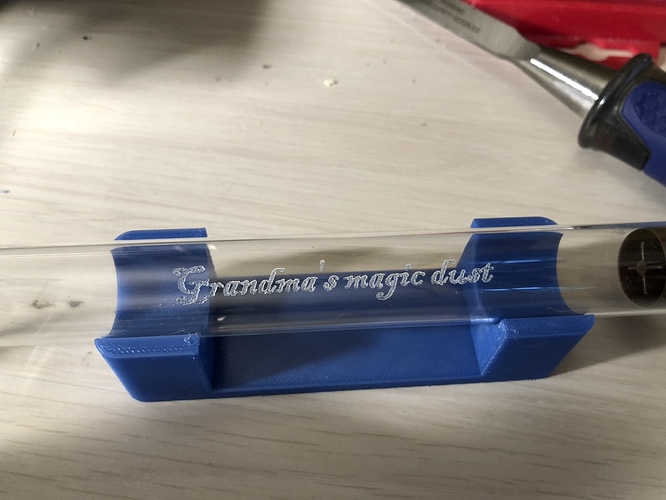 I 3D printed a jig to position the tube surface about 1/4" above the tray height. Then I made a cardboard box, open on the bottom, to place in the bed after having removed the crumb tray. It is just slightly higher than the crumb tray height. This allows the fiducials to be in the focus range of the head camera and also assist in masking the metal bed bottom. It has a cutout to put the tube jig in. 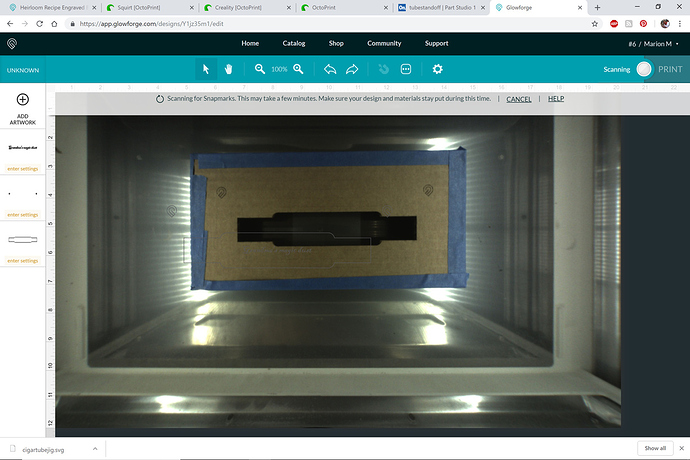 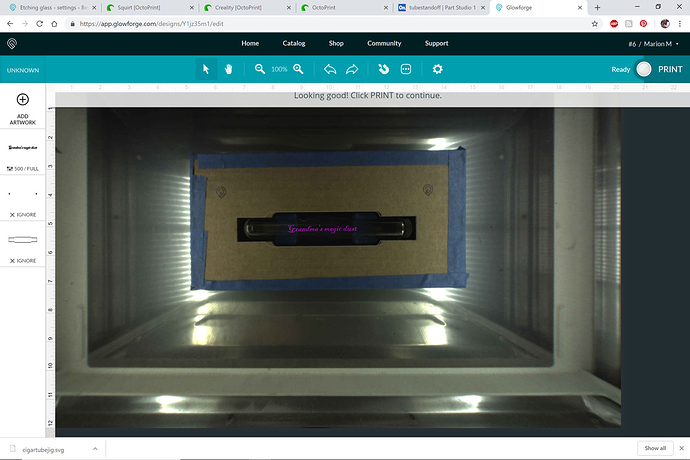 This was my first attempt at engraving glass. It worked just fine.

Using Snapmark and then being able to have saved my cardboard and tile settings really sped things up. Thanks Glowforge for these improvements. 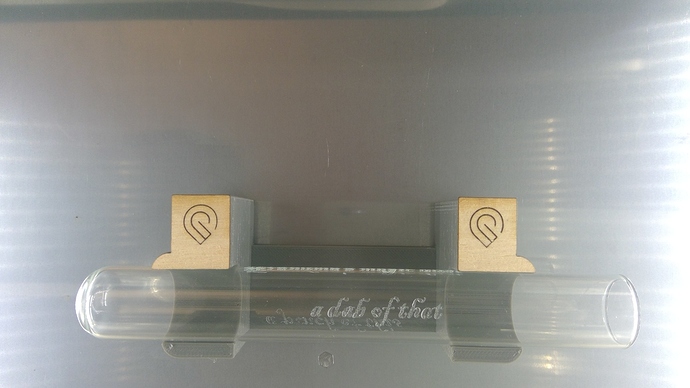 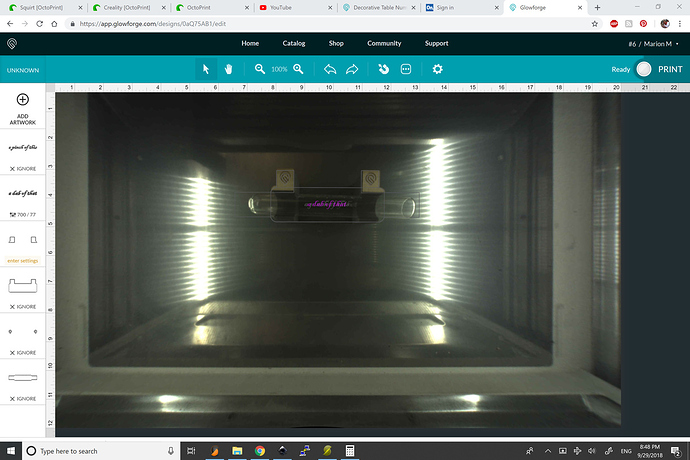 Thanks @alan_ferrell for the suggestion. I adapted my jig to have a platform for Snapmarks. Works perfectly. Could ditch the cardboard.

I cut out and scored snapmarks on some birch veener. Then stuck them on the jig.

I want to know more about Grandmas dust.

Hey! Yeah, he kinda skimmed over that.

With all the Harry Potter magic, I figured something like this would be a neat little gift. I couldn’t think of anything more interesting as a name. I guess it depends upon the Grandma, what the dust actually is. Leaves a lot for speculation.

I want to know more about Grandmas dust.

what the dust actually is

I’m a grandma, and I have a lot of dust (especially now that Hubs is in charge of housekeeping for a while), but I don’t think any of it is magic.

Actually most of it (what’s under the bed, anyway) is pieces of us and stars. I guess that’s kind of magical, if you think about it. Robert Fulghum wrote a nice little essay on that in one of his books one time.

Snapmarks would really come in handy right about now as I prepare for my upcoming trade shows. From all the posting it looks like a "snap " to use.

A little more challenging was making a jig for engraving on a glass cigar tube.

That tube holder looks like you 3D printed it. What about printing another with a space to engrave the snapmarks, or a little shelf to hold a piece of draftboard you could glue to it for the snapmark engrave if they don’t register well when burned into the 3D material. You could elevate them a little so in the end, they’re parallel with the top of the tube, which would eliminate needed to change the focus height after calibration. Just a thought.

Something like this? Yes. Would be good to have just the one jig. Could put veneers on the faces of the top and score the snapmarks. 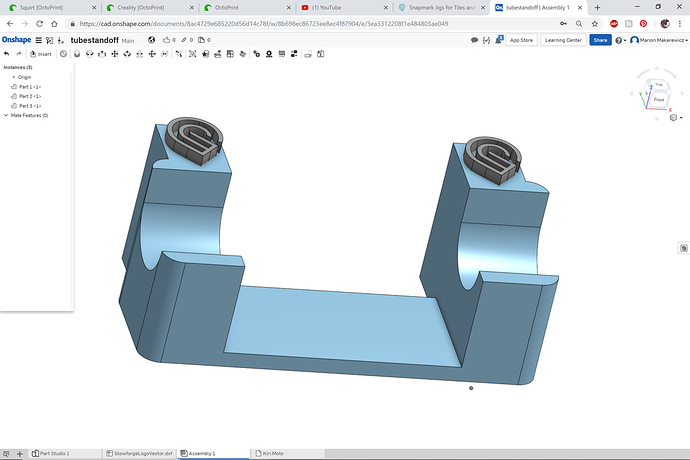 You are all so ingenious, but how are you creating the actual 3D jigs? So confused!

how are you creating the actual 3D jigs?

With an actual 3D printer.

So glad to read that Grandma is not a coke head

my wife used to spread glitter around when the tooth fairy was in Da House.