On Christmas Eve, I printed a file several times without an issue. When I loaded the same file on Christmas evening, I got the following errors: 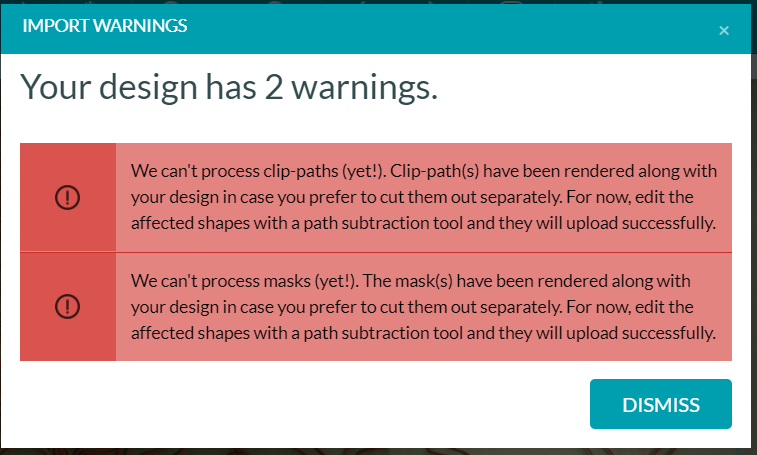 Did something break with an update? Or maybe the messages are new for something that was automatically happening? I’m not asking for anyone to troubleshoot the file just yet because obviously it worked 2 days ago.

I’m just trying to figure out if the file will cut differently (without having to run the whole cut) or if it’s more of an informational change. Or something else entirely… What’s new?

I’ve had some files with text that I uploaded and didn’t get a warning until the next time I opened the design in GF. If you’re sure there have been no changes to the file you previously used successfully, then you’ll probably be okay.

It used to be that they weren’t persistent. Not sure now. In that if you uploaded a design that had errors, dismissed the errors, you wouldn’t get additional errors for the session. I never tested it extensively though.

The preview should be WYSIWIG. If the clipping mask was actually clipping something, you should see the unclipped version showing up in the overlay.

I’m now more confused than ever. I didn’t dismiss any alerts. I am forever forgetting to convert my text to a path so I got that alert, deleted that print, fixed the problem, and re-uploaded. This one had no error originally. In fact, I uploaded several versions of this design to test and none of them triggered an error. You guys think the problem was there all along and there was just no error message initially?

I’d just make sure you uploaded the file you thought you did…can’t tell you how many times I’ve grabbed the wrong one when I get into a hurry.

Been there, done that!

I uploaded the file on Christmas Eve and cut it. I had deleted each of the previous versions before uploading a new one, so there is only the one file in my design library. I loaded it on Christmas day for the sole purpose of checking to see if I had been given Snapmarks (sadly, no) and it triggered the errors. Nothing had changed on my end. Since I knew they had pushed out some new Snapmarks, I thought it was possible there was some sort of other software update.

I frequently get those errors when I have used clip paths to allow me to center an image that would not center properly otherwise, As I have already made the area outside the design white i am not caring that the GFUI will ignore it. I would think this just an alert if you have used masks or clip in building but they would not affect your design when the GFUI ignores them. If, as was the case the first time I used them, you had stuff that was being covered up that would be a different matter.

Thanks for bringing this to our attention, @ChristyM! This is very interesting. I hadn’t personally run into this behavior previously, but after a little testing of my own, I saw this happen, too. Here’s what I did:

I’ve passed this on to the team so we can look into it. In the meantime, nothing has changed about the behavior or expected print results for your design. If you upload artwork that contains unsupported elements like clip-paths or masks, the app will adapt your design and present an alert. It just looks like the alert wasn’t shown to you that first time, but I don’t believe this was due to any recent updates.

Please note, some design software uses techniques like masks in the technology underlying other tools, like pattern fills, so they can show up unintentionally. As others in this thread have pointed out, what you see in the Glowforge app should reflect what prints, so the clipping elements might not have any adverse effect on your print, depending on the design. I’m so sorry for any confusion!

Thanks again for letting us know about this.