I’ve haven’t found anything in the forum about designing in Solidworks and how it could be used for laser cutting. Does anyone do this now or plan on doing this when they get their Glowforge? I do a lot of design work for 3D printing, so I use Solidworks. But I’m just not sure how this would translate to laser cutting. Do I just export my work as a DXF and Glowforge can take that or is there more to it? Has anyone seen any tutorials for how to do this?

Do I just export my work as a DXF and Glowforge can take that or is there more to it?

From what I’ve read on the forum and from what the Teck Specs say, the Glowforge should be “compatible” with DXF. Now on to what the definition of compatible is! As for @jdodds comment, I’m hoping the answer is :

“yes, you will be able to export to a DXF and directly import that into the Glowforge interface and cut”

As for Solidworks workflow, I’ve only done it once with an Epilog Zing. I saved as a PDF and a DXF, just in case one worked better then the other. Then I imported them into Adobe Illustrator, edited the line thickness and sent it to the Epilog. There was an issue where it didn’t like the lines at 0 thickness, which I don’t know why, since it was a cut. It was a very clunky process, and I’m really hoping the the Glowforge will be better.

I am a pretty heavy solidworks user and have used lasers.
DXF files are generally the go to file for flat patterns (like when i have stuff water cut)
That said the GF should be pretty responsive to the coloring of your lines and my understanding is that the DXF files are pretty binary in color. The file should work great for cutting but im not sure how the engraving will work.

I did the following project in SW and then sliced it using a driven configuration. Then had to save each configuration as a DXF file and compile them in Adobe Illustrator.

Alrighty guys. Here is my design entry. Keep in mind i have never designed for laser cutting so I welcome all critics. Its a puzzle box. Put a marble in and try to get it out the other end. Normally I would have glued it together. But at...

I figured it would work, I just am looking forward to someone getting one and showing us some workflow. This is just an assumption, but I thought you would just import the DXF then click the lines and mark them cut or engrave. Could be way off, but maybe someone from GF will actually let us know.

I do everything in Rhino, and DXF works great with my Chinese lasers. Both LaserCut and LaserCAD usually pickup the different color layers that I put artwork into, so sorting etch vs. cut is pretty quick.

We’ll support DXF import, but it’s not done yet. For the moment, the most reliable plan is to convert it to SVG, for example via Inkscape or Illustrator.

I find DXF to be more consistent than SVG due to the variants in the SVG translations between products. Super happy to see DXF!

@dan - Really looking forward to DXF support, and if you see this first, please ignore my DXF question in another thread.

I used solidworks to design a lot of 3d objects. I originally planned to make them with a 3d printer, but with the probability of it warping, and the excruciatingly long time to make each of these objects, anything less than a liquid resin dlp or clip printer would be impossible to make these.

So I took to just drawing it out in inkscape, converting to dxf there, and had the pieces cut from sheet plexiglass, and reassembled with weld-on.

I do thank the solidworks tools, but i ended up scrapping it and using a 2d program instead. The results are pretty awesome www.sawatg.com

I’ve done a little work with illustrator in the past, but I don’t like their new monthly pricing so I just need to take the time to learn inkscape.

You might benefit from the Finger Joint add-on feature in Onshape. I’m hoping to put it to good use for some wooden boxes I’d like to customize but it looks perfect for generating the tabs on your dungeon parts. 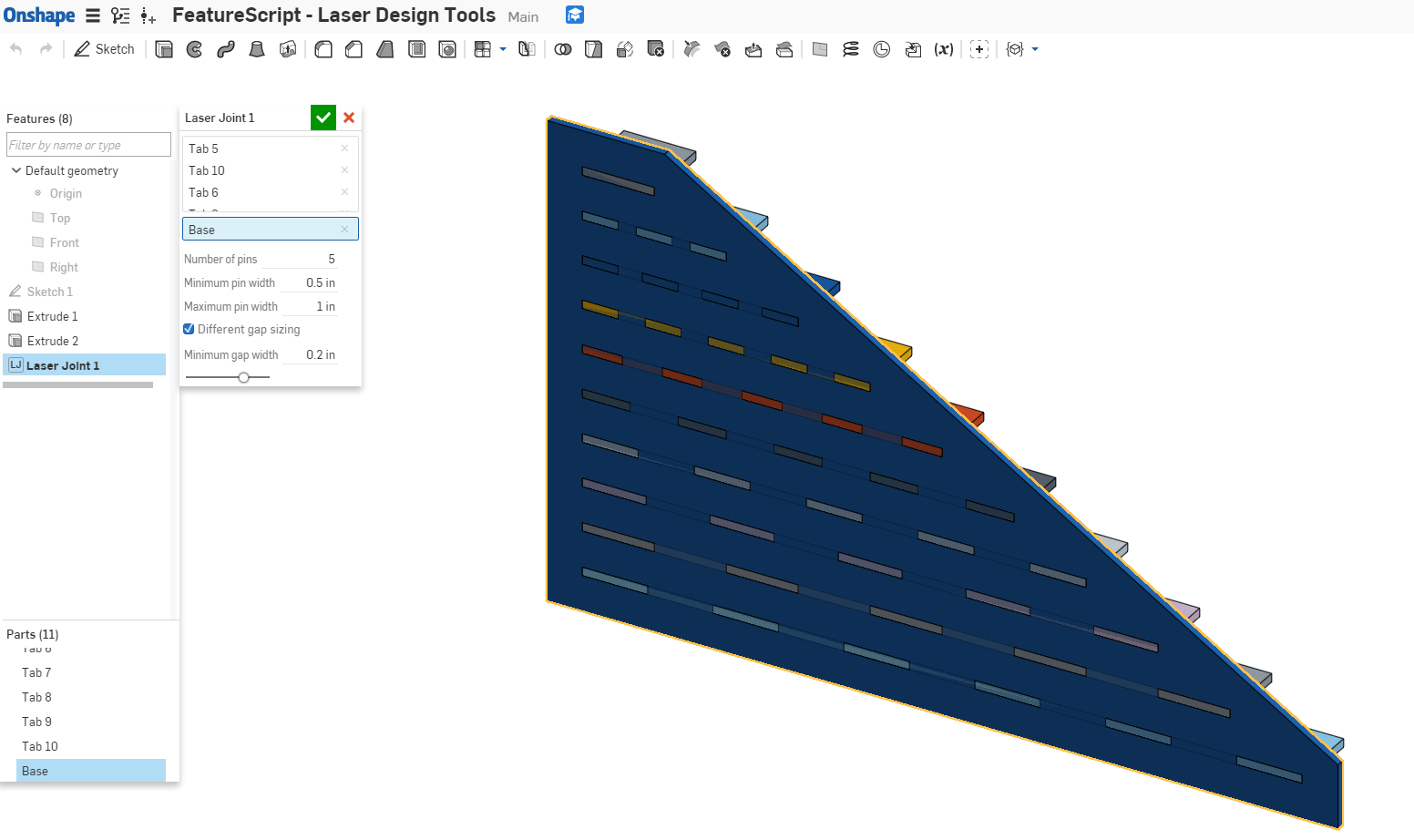 The worst part about designing laser-cut structures in SolidWorks is CADing all of the finger joints between components; even if you use a boolean for half, you need to CAD or pattern one side, and neither is all that nice.

I have limited experience creating 2D patterns from Solidworks. The workflow that I used was very straight forward, from what I remember. I remember just selecting a a PLANAR face and then exporting it as a DXF using some tool in a drop-down menu. I or it was the other way around. Anyway, I then saved it to a folder. Those parts were sent out for water jet cutting. By the way, one important detail about curves/lines. The waterjet technician, who also run laser cutters, said that all splines should be converted to curves/arcs. So, at least with the 2 vendors I talked to, lines and arcs are best. If you can search Youtube, or just a web search, there should be short tutorials about how to convert 2D patterns/shapes into a DXF for laser cutting and water jet cutting.

Ive done the design part for all these plates and just now working on getting master molds for each.

One thing I learned about exporting a DXF from SolidWorks is that exporting a planar surface works better than exporting a sketch. …for some inexplicable reason.

In other words, if you were to sketch square plate with four bolt holes in it with the intention of exporting it to DXF, it’s a good idea to extrude it into a solid and then just select one of the surfaces to export it.

So the structures in the pictures were prototypes? Looks like you’ve given this endeavor some serious thought and planning.

For most of the things I intend to build, the finished product will be modeled as an assembly in 3D and individual components or parts cut from DXF exports from faces of the modeled parts. Onshape makes that easy to do and it sounds like SW does as well.

Could you explain how to export a planar surface in Solidworks? I’ve never heard of that and I’ve been unable to find an example on google.

I hope this helps, I think its what you are asking for.

Save part as DXF.

It will ask you what you want to export. I usually do a view.

It will give you a preview that you can adjust and clean up before saving.

I don’t have SolidWorks in front of me but, as I recall, once you’re saving a DXF you can basically just click on a planar surface and it’ll basically save it. I see in joe’s images above that there is a place where you can choose “Faces / loops / edges” as the type of export and I think there might be something like “use normals” in the “Views To Export” area.