Hi Everyone! After finishing up the Micro Dice Tower I made, the plan for the board game came together quite quickly and stuff worked as planned (sometimes surprising). I’m still trying to work out the actual game play, as I’ve had many different ideas about actually HOW to play, but the basic premise is that the wizard travels through the forest collecting the fire crystals and takes them to defeat the Gargoyle at the castle, while spelling his way through battles along the way. 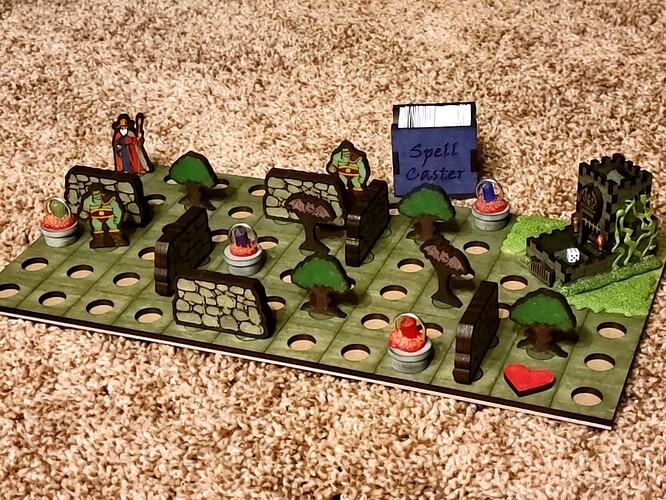 The modular-ness of it allows for ever-changing maps and objectives. I kept all the extra circles cut out of the board, so it’s easy enough to make more walls, more trees, new mobs, new obstacles/traps, etc. so it can grow with us. The card deck is easy enough to print new cards to update to current vocabulary, hopefully this will become a fun staple game for us. He hasn’t seen all of this yet, but he knows I’m making a new game and I let him pick his colors for the wizard, so he’s already in to the idea, and sometimes that’s half the battle with 5 year olds!

Mostly medium PG Draftboard. The fire crystals are a big jump ring with a crystal carved from a hot glue stick and sharpied jammed in to it, then stuck down in to a puddle of hot glue, which I textured with a toothpick as it cooled, then colored with two shades of orange sharpies. Pretty solid and sturdy, should hold up to being handled, they do come off their braziers to be ‘collected.’

Edit: forgot to mention, I backed the board with three pieces of 4x6 1/16" chipboard instead of using more draftboard, overall size 6x12"

Pretty spectacular, as are all your creations! Your glue-gun slinging is getting pretty amazing as well.

I don’t think you will ever have trouble getting your son to study! You make everything so fun!

I’m sure your son will love it. So creative!

Your glue-gun slinging is getting pretty amazing as well

I want to know how many finger burns were incurred

I pulled my hot glue gun out yesterday for a project. Probably for the first time in a year. Of course I dropped a blob of hot glue on my thumb and blistered it all up. You’d think that would teach me to watch where the glue is going…but of course I’ll do it again next year when I need to do do another hot glue project

Yeah I’ve had a few finger tip burns, I actually almost burned my fingers on the jump rings making those crystals because they ended up getting hot sitting in the glue. But for as much hot glue as I’ve used lately the burn:usage ratio is lower than I would have anticipated it to be, so that’s a good thing I guess.

That is some very awesome creative juices flowing through you!

Long ago we played a game from a D&D magazine called ‘Search For the Emperor’s Treasure’. Reminds me of it. We still have it.