Guess what I’ve been doing? 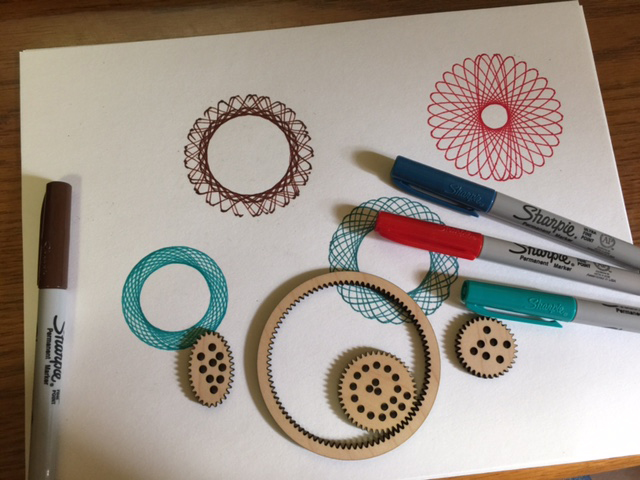 Ah Man! now I really want to make one of those!
so cool @Jules!

Nice. Bought a classic Spirograph set some months back with the intent of expanding and tweaking the design with the GF and come up with my own personal version. The wife grabbed it to play and haven’t seen it since. Need to revisit the original plan.

Nice. Bought a classic Spirograph set some months back with the intent of expanding and tweaking the design with the GF and come up with my own personal version. The wife grabbed it to play and haven’t seen it since.

Boy does this take me back. I thought I was a real artist at the age of 10 or 12 or whenever it was that Spirograph first came out. I like them in wood!

They’re a whole lot easier to use in wood…remember how the gears used to slip? These have deeper teeth.

There was a guy at the last local mini maker faire who had one a few feet across with chalk. Was working on a 20-ft model with an attachment to put the drawing implement on the bottom of a desk chair…

(Would have been fun to watch.)

Love the oval gear! It would be interesting trying this with other non-circular gears… Dang Yea, another project for my hopper.

Guess what I’ve been doing?

Saw one today that was a little larger made out of Acrylic and they were using chalk on the sidewalk with it, it was very cool. I question whether you could do the size though on the Glowforge

I will have to do this. I bought a really nice spirograph, then ended up giving it to my youngest daughter, instead.

Aaron Bleackley has had a couple of kickstarter campaigns with hypotrochoid sets. Bleackley’s sets (which he calls wild gears) have some cool non-circular gears - including non-circular and interlocking bases. Here is his Wild Gear 3 campaign.

@Jules I hope this is something you’ll consider putting in the design store.

Chuckle! I’d have to change it up sufficiently so that Hasbro didn’t come and sue me for my paltry 20$ in net profit. I was just foolin’ around in Illustrator.

(Can’t believe those Wild Gear things are selling for that much either…I must just be really out of touch.)

The larger ones are made in segments that lock together. (also multiple layers laminated). Otherwise you couldn’t transport them. Part of me wants to do a really fancy version with the GF (with segments of all different radii plus straight, and ditto gears) but I don’t want to steal this guy’s thunder.

These are so cool! I loved them as a kid.

I didn’t think about that. Yeah, I do remember them slipping a lot, especially the oblong ones.