I have been obsessively keeping all my scrap and it paid off today. Made these to bring to a spooky crafting thing: 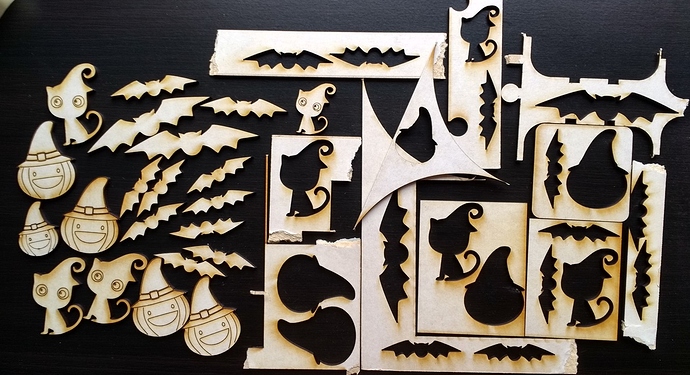 Had to do them in small batches since I could really only rely on the camera alignment for the middle of the bed, but it came out really well! Even tiny pieces on the edges that I thought were useless became bats. I ran out of time so didn’t go through all my scrap but people loved coloring them. (Sadly I forgot to take pictures of the finished ones.)

Think I’ll be converting more scrap into cute things for people to color (with markers) whenever I accumulate a batch.

For full (2") sized pumpkins and cats I used HQ scoring for the interior lines; draft for smaller ones.

Nice to make the blanks for coloring in. And I assume you’ll keep the scraps of scraps. It’s a terrible obsession.

It’s pretty bad when people come up to communion at church and all’s I can think of is: what cute pumpkin earrings. I could totally make them with the Glowforge.

Of course I kept the scrap scraps! Now to figure out what I can do with them…

Which actually brings me to the question: are draftboard scraps safe to burn in a fireplace?

are draftboard scraps safe to burn in a fireplace?

I use them in my pizza oven.

I’d say that if we are burning it with a laser and say the exhaust is taking care of any nasty stuff, a fireplace would work. If you fireplace has a good draft, it should take care of it. If stuff gets into the room from a fireplace, bad MDF is the least of your concerns.

Then again, I am not an expert on materials combustion science. Just practical common sense for my use cases. Glowforge is going to have the least potential for toxic stuff in their Proofgrade. No I can’t point to any post or hard evidence, but avoiding nasty surpises in the materials was one of their goals.

And I see @jamesdhatch has posted already and I was going to tag him. He puts a lot of stuff in his pizza oven.

He puts a lot of stuff in his pizza oven

Sometimes it’s even pizza. One of the design parameters was a door big enough to slide the Thanksgiving turkey in (which then dictates done height & diameter

For Thanksgiving week I’ll be doing Prime Rib on Tuesday (one of the carnivore kids will be coming home early), turkey on Thursday and pizza on Saturday. Gotta laser more things so I have kindling

they could be used as paint stencils

It’s pretty bad when people come up to communion at church and all’s I can think of is: what cute pumpkin earrings. I could totally make them with the Glowforge.

I used to toss the scraps into the oven. Then I started a project to make some reindeer for Christmas (I’ll flat pack them and use them for laser class & everyone will have one for their Thanksgiving plate do-something while waiting to be served). Turns out the little legs and antlers can fit in scraps and in scraps of scraps. The oven is getting fed less this month

I like it but for some reason when I click on the link its not doing anything, any ideas?

I have this beaker next to Glowforge and put these kind of scraps into it. I have a problem right? 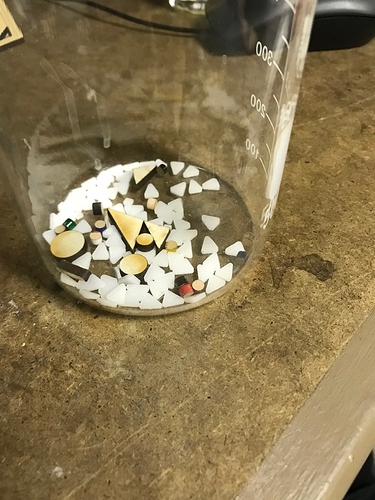 You have a beaker? I have a bucket.

Seems OK to me!

I mean seriously, if a person was into wood turning or handcrafting stuff, they could fill that beaker with all kinds of interesting scraps then fill it with a water clear resin and carve or use a lathe to make it into something spiffy.