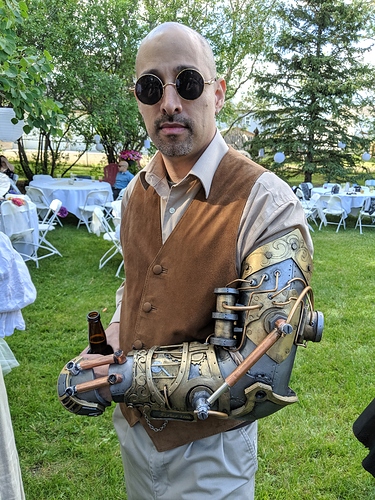 I had posted this in the Made on a Glowforge section and a couple of people wanted the settings, so I’m making another post here. 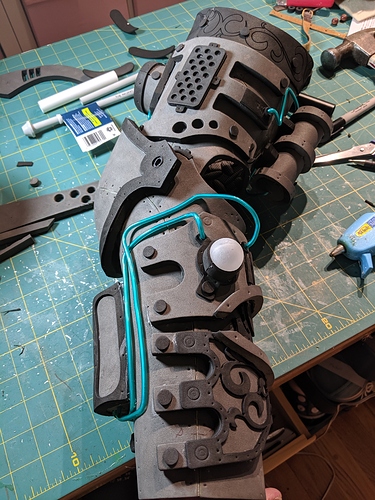 The foam I used is EVA - it’s a big roll that is marketed as an anti-fatigue mat. Similar to the interlocking squares you sometimes see. A giant roll was $13 at a liquidation store. I could probably make 3 or 4 with the entire roll.

The foam is grey and 0.2955 inches/7.5 mm at it’s thickest point. It’s got that diamond tread pattern on one side so the thickness varies.

I tacked it to a piece of baltic birch plywood with Krylon Easy Tack to cut…just to make sure none of the pieces blew away since the foam is very light.

I engraved the outlines of the flourishes on the top band but you could probably just cut at a lower power to save time.
Engrave: 1000 speed, 60 power, 125 LPI

The pattern for this arm is by Lost Wax. Chris makes amazing patterns! https://gumroad.com/l/ZswCg

Thanks for sharing the settings and the inspiration!

Wow, just made this myself yesterday!!!

I was getting 99% cuts at 275 and in the end just went for a safety setting that I knew was going to cut even if the foam was variable. I did try two passes at speed 500, but couldn’t really tell the difference.

I’d love to see a picture!

For 2 mm foam, I couldn’t get a good cut at full speed. I use 400/80 on the black stuff and 400/80 on the white stuff. On the thinner foam, I do 1000/30 for engraving. I did a whole bunch of tests at different speeds and powers when I fist engraved the thinner foam. These were the settings with the least amount of melting at the corners. I couldn’t get it to cut cleanly at full speed.

What I love about 2mm foam is (a) its dirt cheap and (b) it cuts in seconds. Briliant for prototyping and trying things out.

I’ve found different makes hold detail better. The last lot I’ve bought is a but more “melty”, I guess it’s density of foam. I’ve just been buying the first thing that comes up on Amazon, but I think I’m going to look at getting some cosplay foam so that I’ve got something consistent.

Thanks much for the details. I haven’t yet started to play with EVA but this kind of thing is totally my bag.

It’s very addictive. You’re going to want to cut all the things!

I’ve been mainly using the Creatology stuff from Michaels because it’s easy to pick up and they have the large rolls in the store nearest to my house. I’m in Canada so getting stuff in a cost effective manner is sometimes tough with the exchange and high shipping rates.

that’s awesome. thanks for posting the settings. need to try this!