Previous postings have implied the ‘add artwork’ feature doesn’t work for Catalog designs. Is that still the case, or is there some trick to get it to work?

You can’t download it so there is no working with it in an art program but the “add art” button works just fine to add and position a raster file.

After loading a Catalog design (for example, the 3-pocket Executive Card Wallet), it initially appears as if I can add artwork - I see the graphic in the GFUI, but what gets added isn’t really recognized by GF’s rendering engines - it’s not really there, it doesn’t get printed.

From this distance, I can’t tell if it is that design or your artwork. I have a scrap of maple toasting right now using one of the catalog designs I “own”. If it is not confidential I’d upload the art so some someone can see if they can replicate the problem.

I just did a quick test and opened the coaster set from the catalog and added my own PNG file. It seemed to process fine and showed up in the final preview as ready to cut. (I didn’t try and actually run it though. ) Is your artwork showing up in the preview and not actually cutting/engraving or is in not being processed at all? I know it seems silly, but maybe post a pick of the final preview window? 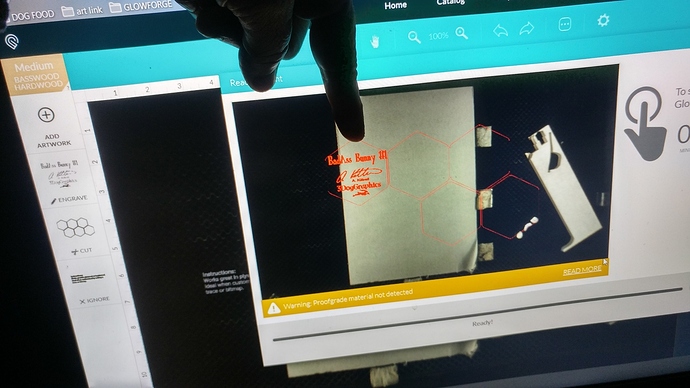 What happens when you load just the artwork into a blank project?

Below is a sequence of pictures to tell my story.

First, the artwork that I’m trying to add. It’s a .jpg file, and here it is read in and rendered properly as an independent project: 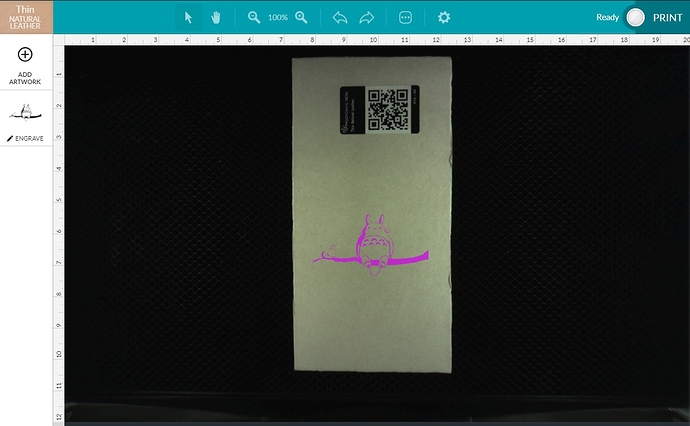 artwork.jpg1232×762 113 KB
It looks hunky dory, with the engraved areas in red and the surrounding area clear (transparent).

Now, here’s the Catalog design, as loaded from the GFUI home page: 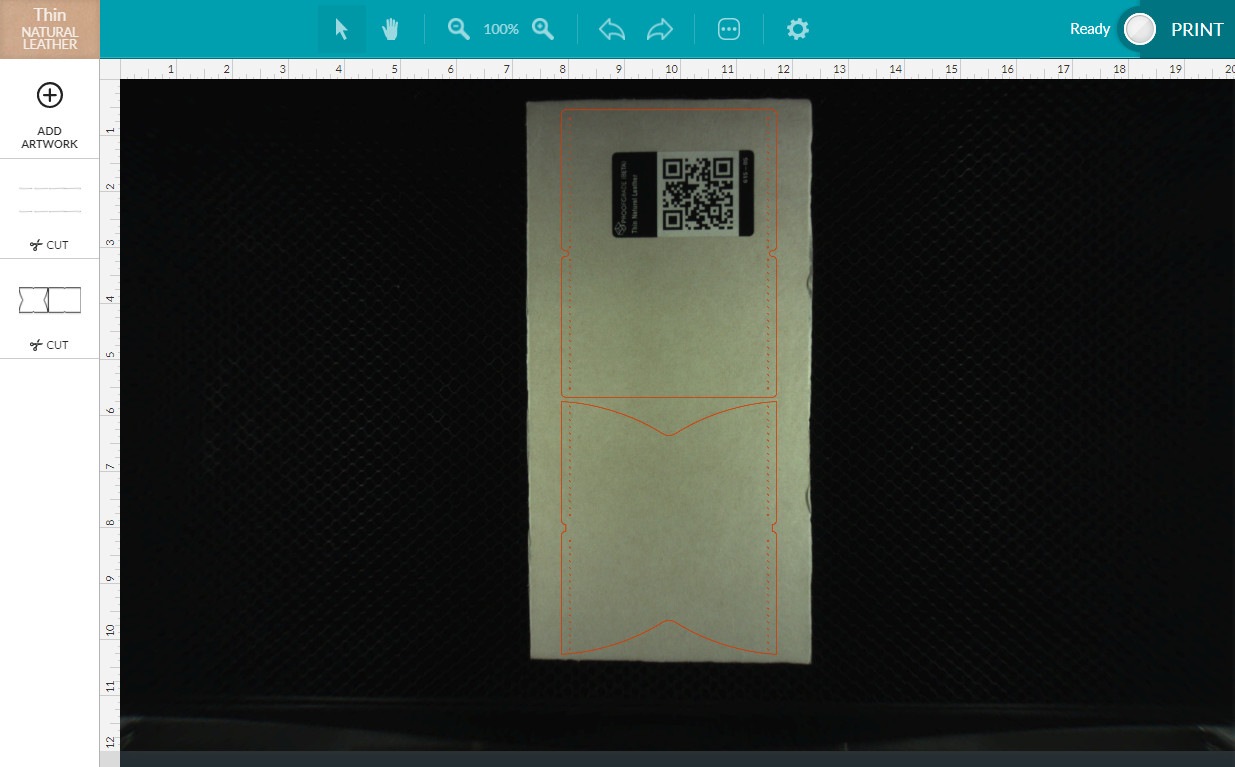 It also looks fine, with two elements both set to vector cut.

This is what I get when I ‘add artwork’ to the Catalog design. Note how the added image looks distinctly different now, with the engraved areas in black and the surrounding area in opaque white. 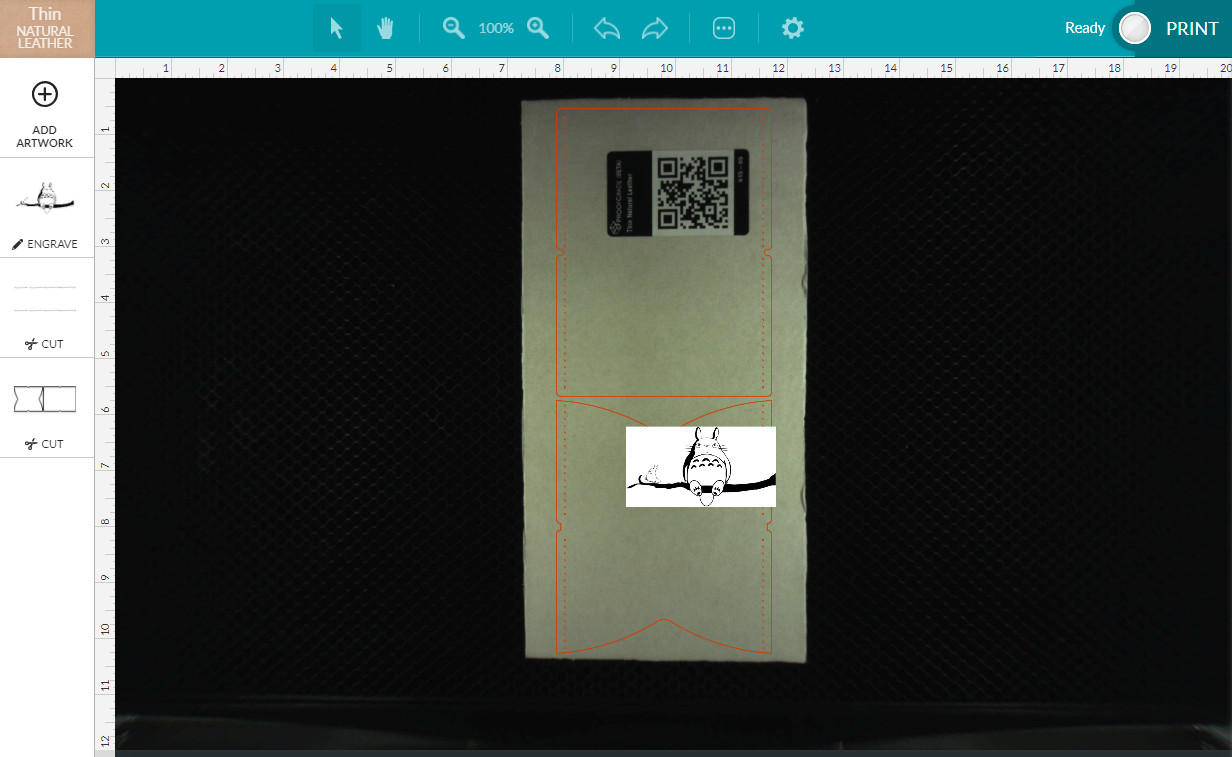 artwork added.jpg1232×757 144 KB
So even though I see an image of the graphic I want to add to the Catalog design, it’s not really there. If I delete the data for the Catalog design but leave my added graphic, the GFUI will state there’s ‘no artwork’.

To further confirm the added artwork didn’t really get added, this is the final preview before starting the print: 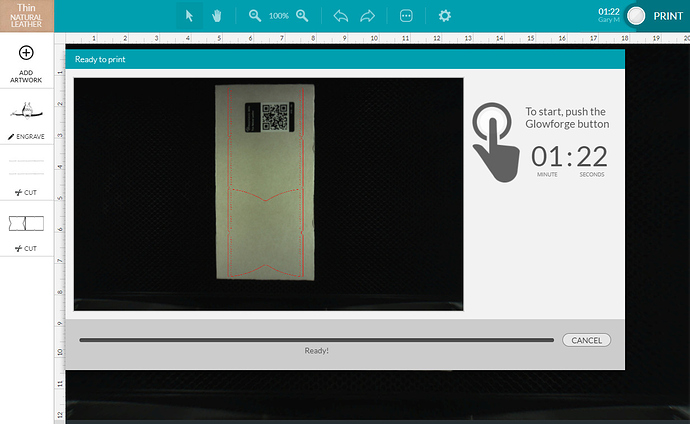 So a key point I haven’t mentioned (until now), is the copious browser-flushing I had to perform just to capture the above sequence. Without clearing the browser, I get ‘phantom’ images in the GFUI.

If I delete the Catalog design and the .jpg image, then reload them without flushing my browser, I see this: 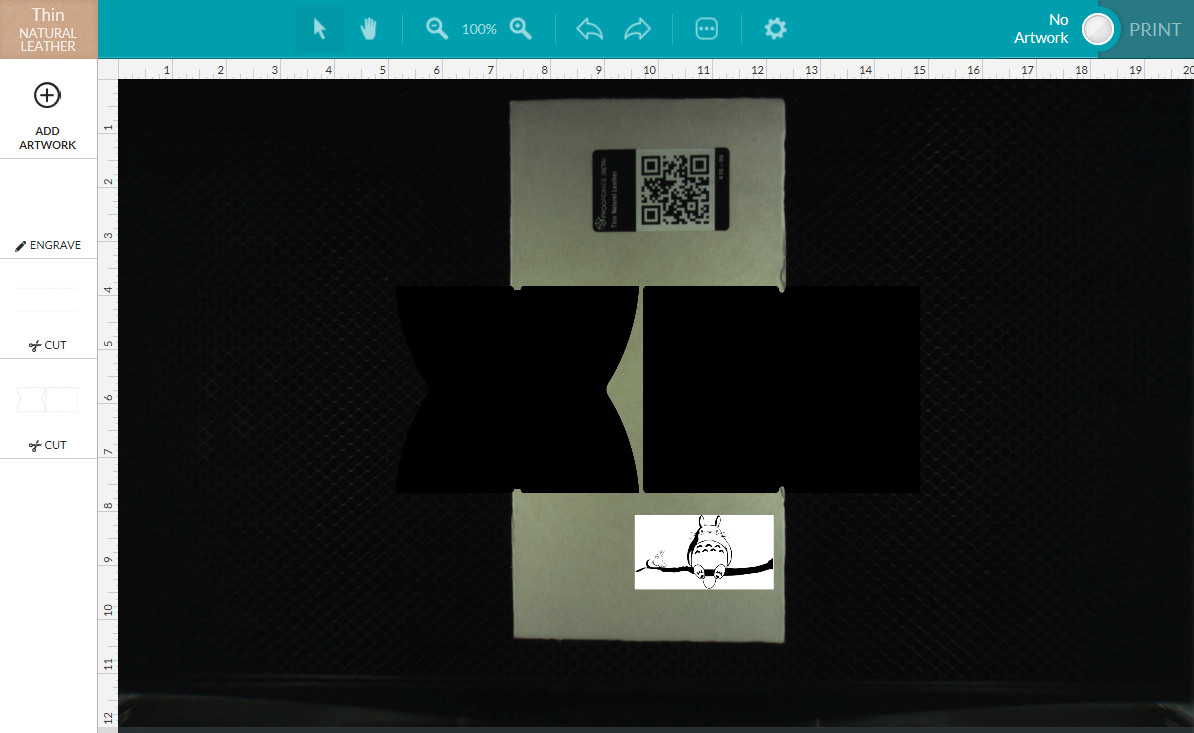 Ever since GF happily announced their new Autosave feature where they remember where you left off, I’ve been harassed by the footprints left behind from previous projects, for each new project I start. It’s as if their code doesn’t recognize that browsers have been caching data long before GF ever came on the scene. They call it a ‘feature’, I think it’s more like a ‘beature’ (bug+feature).

So if I take the position this all my fault - the IT term for which is PEBKAC - ‘Problem Exists Between Keyboard And Computer’, then what am I doing wrong here?

That should load the artwork into the design, and let you set the settings for it, but if it doesn’t, then there is a problem somewhere. The Add Artwork button is buggy right now, we know that and we know they’re working on it. But until then, the drag and drop method has been working without problem for me and it should at least help you to get your design created now.

@Jules , thanks for the suggestion - I didn’t know you could drag and drop. Alas, it didn’t make a difference. After drag/dropping the file, I get the “we’re processing your design” message, followed by what I would call a null-graphic image of the artwork I dropped.

I can get either the Catalog design or the additional artwork to be rendered properly - but not both. However I can dogpile my own files into the work area and each of them are processed correctly. So for me this problem seems exclusive to design data from the Catalog.

The Catalog design I’m trying to use, was purchased as a ‘per print’ design. Perhaps an ‘unlimited’ use design might behave differently?

Did you already get your one print out of the deal? (I’m not sure, I haven’t tried one of those yet), but it does make me think…maybe it’s just that one file that has a problem. Can you try dragging and dropping a jpeg onto some other Catalog file that you have? You can always delete the jpeg after and not process it.

You know how there have been a couple of wonky Catalog files? Maybe that’s one of them.

@Jules, yet another good suggestion!

I just did a survey, and about half of my Catalog designs inflict this suffering upon me:

All of the above designs were ‘per print’ purchases. I’ve been following the guidelines for single-use files, which per @dan are OK to do a test-firing on cardboard for practice, fit testing, or in my case, fine tune the process of adding an engraved image to a Catalog design file before going live with the final source material: Catalog “per-print” ground rules?

Aha! Maybe they haven’t fixed up the Per Print files to accept additions. In which case, this hopefully helped them to troubleshoot a bug to be squished.

Thanks @Jules.
And @dan: you’re welcome.

The whole ‘per print’ versus ‘unlimited’ has never seemed like the right distinction for the pricing differential in the Catalog. The maker/hacker in me would happily pay for the ability to download the design files locally, so I could customize the design, like reshaping, adding artwork (like engravings), and so on.

Thanks for letting us know about this, and for taking the time to provide the screenshots.

I’ve passed these details on to the team, and we’re looking into it now. I’ll update the thread when I have more information.

Thing is, and I hope this doesn’t sound mean but, it’s not your work to alter. Somebody designed it and that’s the way they want it. One day maybe you’ll design something and sell it here on the Glowforge site. And maybe you’ll care about keeping your design original, or maybe you won’t. But I’m sure you can understand how an artist who works so hard to design something might want to keep the basic design as they intended. Hope that makes sense. And, again, hope it didn’t sound mean or something. Just pointing out what might not be obvious.

@Tom_A, I totally get what you’re saying. For what it’s worth, the energy I put into my creations is specifically intended to inspire others to participate, and the GF is an awesome tool for that purpose. The more they hack and modify my work the better, and I never lose track of my signature in that process. However, that’s just me, and I don’t mean to talk anybody out of their view of their art - my apologies if that came across as presumptive. To reiterate, I suggested enabling access to edit the data as a premium cost option, which would be up to the author allow or not.

As for it not being my work to alter, what did I pay for? I can buy a painting from an artist, then paint over it if I wish, because it became my painting once I paid for it. How is a design in the Catalog any different? I suppose one could argue the fee charged in the Catalog is only a license to fabricate the design, and I don’t actually own the finished result - this argument seems like a stretch to me, and virtually impossible to enforce.

You’ve highlighted the brave new world the GF creates, by enabling art to be imagined in one place, transmitted digitally, and physically manifested anywhere in the world (with electricity and internet access of course). Heretofore, the artist protected their vision by simply completing it. The GF introduces an intermediate step that makes the art vulnerable to hijacking. I suggest artists seeking to protect their work really think that through.

Unauthorized hacking is not only wrong, it’s also a hassle, so many customers would rather pay for the privilege to build upon the author’s work - if the author is willing.

For me this all began with wanting to add an engraved image to a couple designs in GF’s Catalog - like putting a bumper sticker on a car. I presumed the designs in the Catalog were sourced by artists employed by Glowforge, therefore the IP belongs to Glowforge. At some point that may change, but I’m hoping they refine the biz model first.

As for it not being my work to alter, what did I pay for? I can buy a painting from an artist, then paint over it if I wish, because it became my painting once I paid for it. How is a design in the Catalog any different? I suppose one could argue the fee charged in the Catalog is only a license to fabricate the design, and I don’t actually own the finished result - this argument seems like a stretch to me, and virtually impossible to enforce.

This is actually pretty close to the EULA for running macOS. And the issue with it. Don’t know if windows has anything similar or if it still let’s you own your copy.

Virtually all the software I use nowadays is licensed, but that intellectual property stays within its own medium.

On the other hand, 3D printers, and now the Glowforge, convert a thought into a physical object - how cool is that! Of course, with that coolness comes a new set of property rights issues to sort out, and us GF owners are smack in the middle of that - no place I’d rather be!

Thank you for your patience while we’ve been investigating this issue. If you’re still running into this issue, could you please try the following?

If the problem persists, could you please: