So I had to test this myself with a glass plate.

Took about 45 minutes but came out very nice, really hard to photograph though (image is of a dragon and phoenix, more wedding stuff for my sister-in-law).

My wife now wants me to make customized holiday gifts for her co-workers. 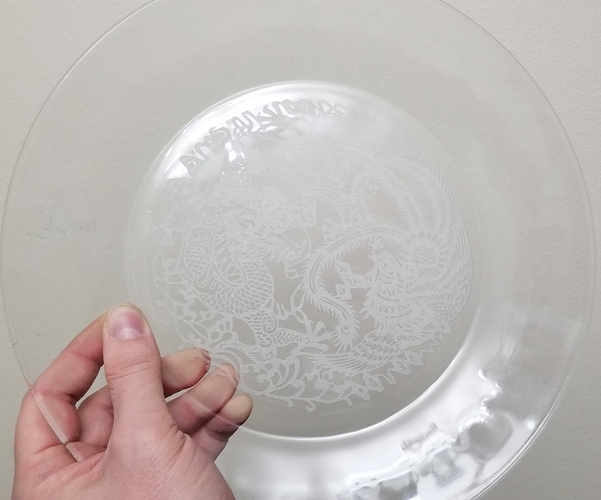 What I can see of it is gorgeous!

The reward for a good job is a harder job.
Very nice work.

From a photography standpoint, when shooting items like this a white background is the least preferred. Great design though.

Very true, I also found out I didn’t realize how few dark surfaces I have in my house that would make a good backdrop until I went looking

I was about to use the dish soap method and then read on the back that it has Sodium Chloride. Wouldn’t that be a negative to laser, or not?

this is lovely… I’m trying out these settings - I’m engraving in the glass tops of jars for my first harvest of honey… since there is no mention of grey scale and converting to patterns/dithering…I’m assuming the file is a vector?

In case no one has answered you privately, I don’t know why dishsoap works, but I know that the salt in it doesn’t prevent a good engrave. It acts like a super thin masking agent that’s water soluble. Masking agents are often latex or paper based, some are even thin plastic. That’s why they need to be applied evenly - thick globs or doubled layers will allow less lasering in that spot causing uneven engraving or cutting. In the case of glass, it tends to also prevent the heat from spreading on the surface, so there’s less fracturing. (Lasers on glass cause microfractures, which is how they get the engraves in the first place since glass doesn’t vaporize as easily as say acrylic or wood.)

Thank you your reply. My concern was with the chloride since various other chlorides are harmful to laser systems (e.g., vinyl, hydrogen, etc.). I can find liquid soaps without it, so I’ll go that route, but most dish soaps seem to have it. Do you have any info on this aspect?

Ok, so let’s math it out:
Sodium chloride is table salt, 50/50 Na and Cl. On Dawn, it is the 5th ingredient, and since they are required by law to be listed in order of weight (unless less than 2%), assume that one gram of Dawn dishsoap has less than 10% of table salt in it (14 listed ingredients, it’s at least 20% water because liquid gel, breaking down by statistics and my working professional knowledge of manufacturing and labeling). >.1gram of table salt containing >.05g of chloride is negligible and unlikely to release a detectable gas when superheated, particularly when ventilation is applied.

Unlike PVC which is all that PVC is. And since it’s a 6th chloride, there’s .167g of chloride in a gram of PVC.

If you engraved a block of salt, you’d probably get some chlorine gas released and corrosive behaviour attacking the lense under the .5g to 1g rule as well.

Now the difference here is you’d only run into that 1 gram of Dawn soap applied in a thin layer to a 12x12 space. With a 12x12 vinyl film running at about 30grams (just a little over an ounce, per my thin stuff) on the top of the same 12x12 space, you’re getting 30 times the exposure. A 12x12 PVC sheet would engrave approximately 3 times the depth of a single PVC vinyl sheet (at approximately 4-6 oz weight) and there you’re looking at approximately 90grams of combusted exposure.

All in all, the soap is a negligible amount of Cl gas if released when all things are considered.

Anecdotes aside, I haven’t ever had an issue engraving through my Dawn soap.

Thank you for taking the time for your explanation. I appreciate it. I can feel better now when engraving with soap and glass. Best to you.

I used to be a fan of dishsoap until I recently revisited wet newspaper. If you have a smaller project, the newspaper is the way to go… I run my glass etching on my Universal laser without air assist on so it doesn’t dry out as fast. Unfortunalty with the GF, I don’t believe the option to turn it off is there yet… 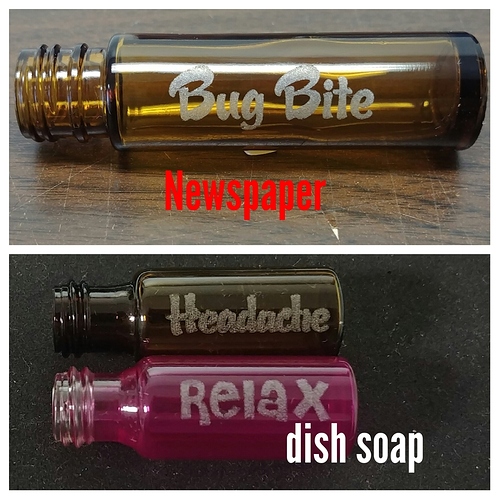 I’m a rebel. 9 times out of 10 I don’t even bother with the dishsoap

I have used it on fancy acrylics, though, to ensure an easier cleanup.

I never used dishsoap on acrylics…I tend to frost only on acrylic and it doesn’t really need any clean up except a quick wipe with a clean soldf cloth.

On glass, there is a difference between etching with and without something to cut down the crackling…you can feel it and the etch is more coarse looking…

Yup! And those 9 times out of the 10 I’m usually following up with a sandblasting or skipping it because it’s for personal use and I don’t care as much when it’s just for me.

Oh, finally-- an idea of how to do labels on tiny glass bottles of essential oil mixes-- that any other kind of label invariably slips right off of. Hadn’t thought of engraving on them!

Here is a video where I do a Glass plate from Dollar Tree. I don’t use any masking or soap.

Settings in the video. Just adding it to this thread so others looking for possible settings/methods to try have it. 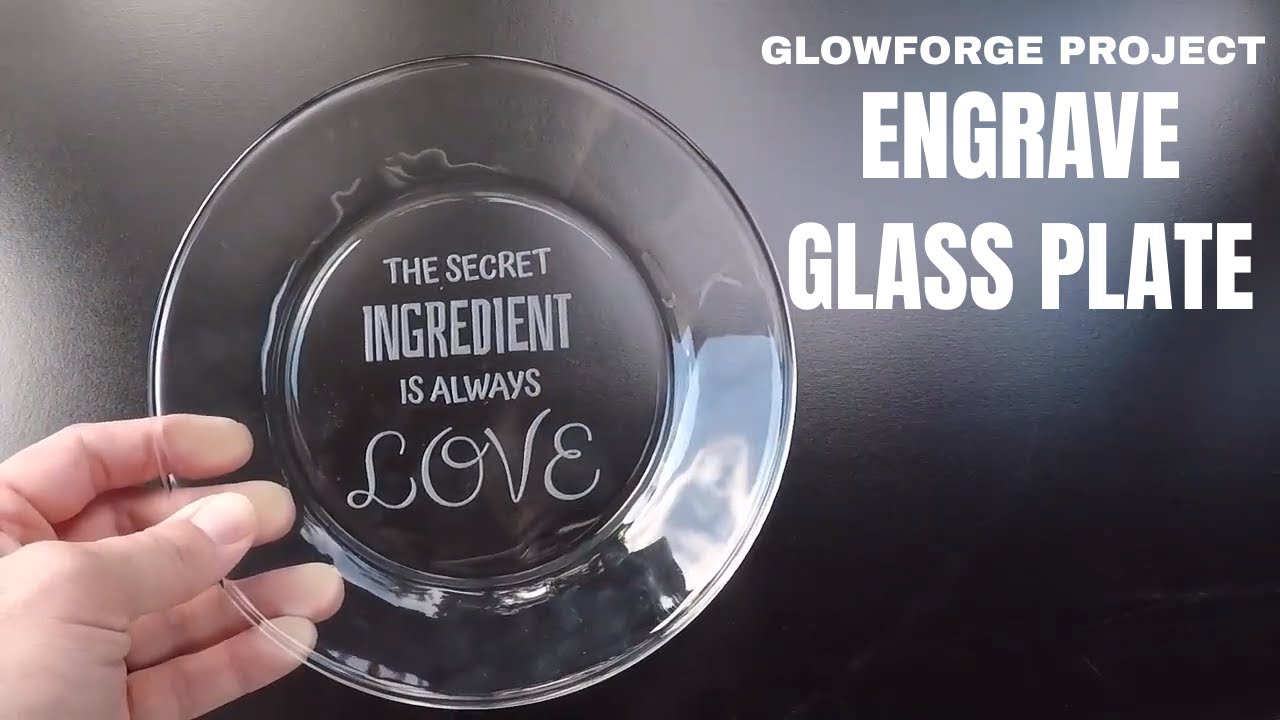