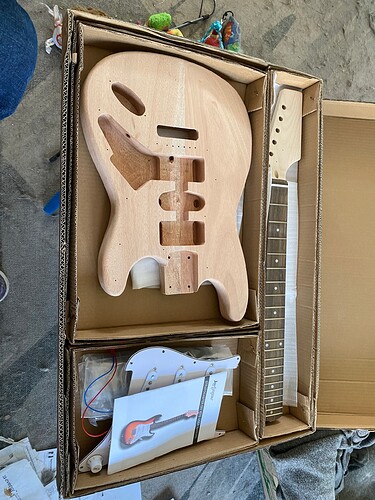 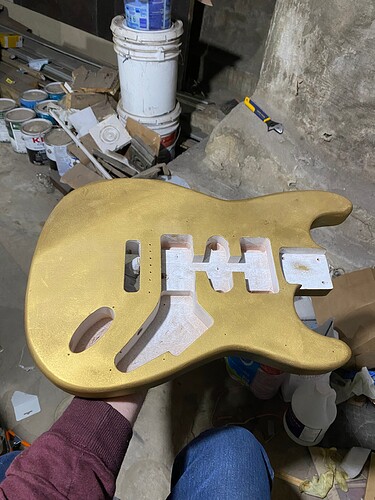 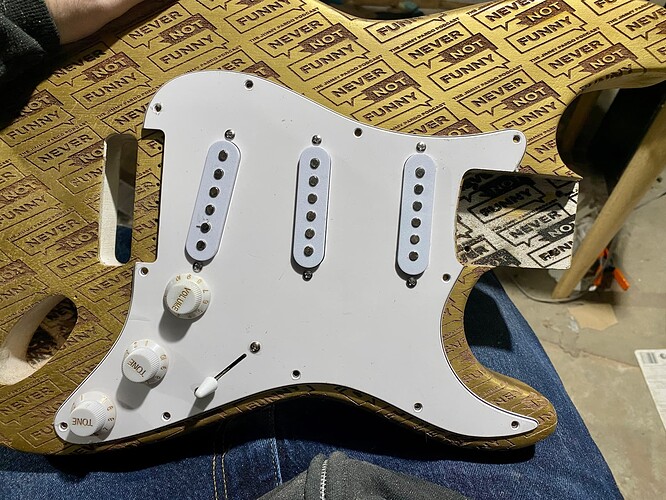 Used my glowforge to engrave a wooden Stratocaster body. Debating if I’m gonna engrave the neck & headstock too.

The headstock is not a bad idea, but personally, I would leave the neck alone - short of perhaps an inlay on the fingerboard.

Didn’t know you could buy kits, probably should have guessed that though. You can get anything nowadays! Nice work!

That inlay I linked to is the best I’ve seen. @shop did a magnificent engraving on a guitar.

nice job engraving the entire thing. did you engrave it in rows? unless that’s not a full size strat, the GF engrave area wouldn’t cover the whole thing. when i did my paisley guitar, i had to break the paisley into chunks and not make it continuous so it would work.

is the design for someone specific or speculative and you’ll put it up for sale after it’s finished? it looks like it’s done for something very specific.

@shop did a magnificent engraving on a guitar.

we did a custom headstock on the last guitar we did. I created a jig on the GF and my partner used it to reshape the headstock (we had a butcher knife style like the one in your kit, which looked awful on a flying V), and then i created a second jig that he used to route away part of the headstock to do an inset acrylic piece. 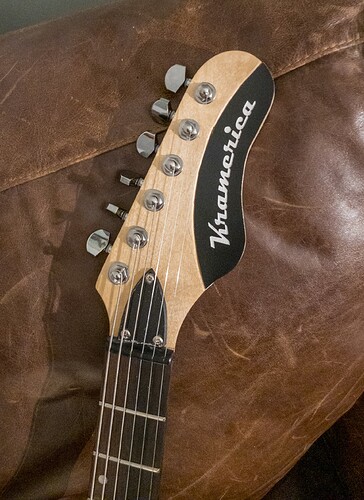 I removed the bed put the body into the machine and using the full bed space available was able to engrave most of the guitar. You can actually see where the pattern cuts off at the top where the angle starts. It would be hella cool to have gotten that space but I just couldn’t make it happen no matter how I angled the body. Still beyond stoked with how it came out.

It’s for comedian Jimmy Pardo’s annual 12 hour comedy marathon & charity fundraiser for SmileTrain. The last couple of years I’ve donated a skateboard that ended up going for $400 each year. This year I’m upping the ante, used my glowforge to make a pair of leather shoes, this guitar, puzzles, and patches. The shoes will probably go for as much as the skateboard would have, but the guitar I’m hoping will pull $1,000. 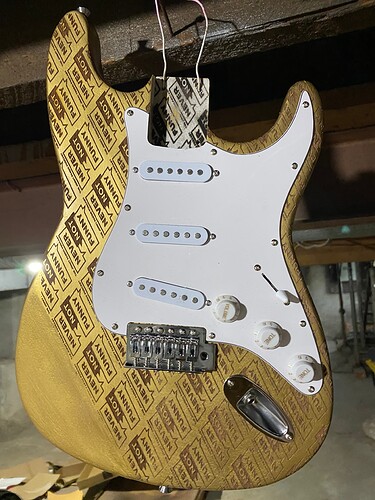 This kit was $90 on Amazon. It’s been a fun project and I absolutely recommend it, I wish I had kids bc this would have been the best way to introduce them to making music.

What an awesome fix!!!

i would think because that pattern has some rows that don’t truly overlap, you might be able to realign the guitar and the pattern with the camera to run a couple of more rows of the never not funny lines and finish off that top corner that slopes off on the strat. you could be paranoid and set up a separate color that is just maybe the outlines of the talk bubbles, mask the guitar, and score on the very lightest setting to see where the marks are lining up w/o actually marking hte guitar underneath. i’ve done that to verify alignment.

i wasn’t able to do that with the paisley because it was a continuous pattern with no logical break. if you’re curious, here’s the link to that engrave.

Paisley Guitar Made on a Glowforge

This one took me a while to figure out how i wanted to do it, since I couldn’t engrave the whole thing in one piece (it’s larger than the engravable area) and i didn’t want to try to line it up perfectly and either (a) trash the body if i messed it up and (b) waste an hour + engrave if step 2 wasn’t perfect. So I inset from the edges/hardware/pickguard and even though most of it is one large engrave (with a smaller engrave on the return (the part above the neck)), I was able to rotate the guita…

my buddy (the guitar builder) and I have done 9 or 10 guitars so far. the paisley one was nerve wracking because of the alignment. i put it off a lot. the others were much simpler because it wasn’t a full-body engrave.

Nice. Where did you get the kit? I’m looking to build a bass.

This looks so sharp, congrats on how great it looks!

This is cool and I loved your paisley guitar. 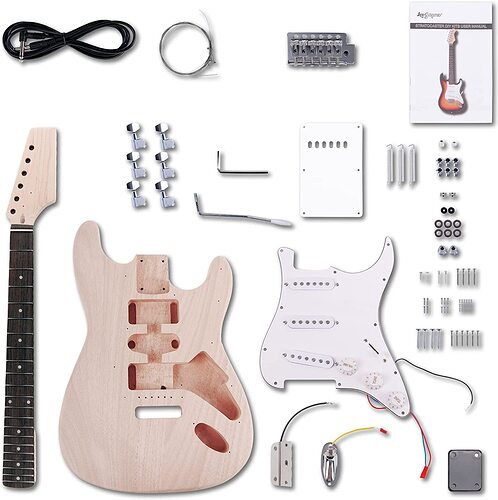 That’s the one I was thinking of.