I’m a new user and am trying to cut the first file I’ve created from scratch. I watched aYou Tube on how to do it and followed the directions…at least I think I did. I used Illustrator and saved it as an SVG. I’ve got my file loaded, but it’s taking for-freaking-ever to “prepare for print”. I’m talking time to change into pjs and make a drink and the spinny “preparing for print” wheel is still going. I could likely grow the limes for my drink from scratch before it’ll be ready. Something tells me the file shouldn’t be taking this long. So…what am I doing wrong??? I’ve attached the file to make this easier. I just wanna print this for my husband so he doesn’t think I totally forgot our anniversary was this weekend. Shhhhhh…I did.

Welcome, thanks for posting!
When a file has a lot of nodes, it bogs down the prep. That’s the issue, there’s a billion of them! 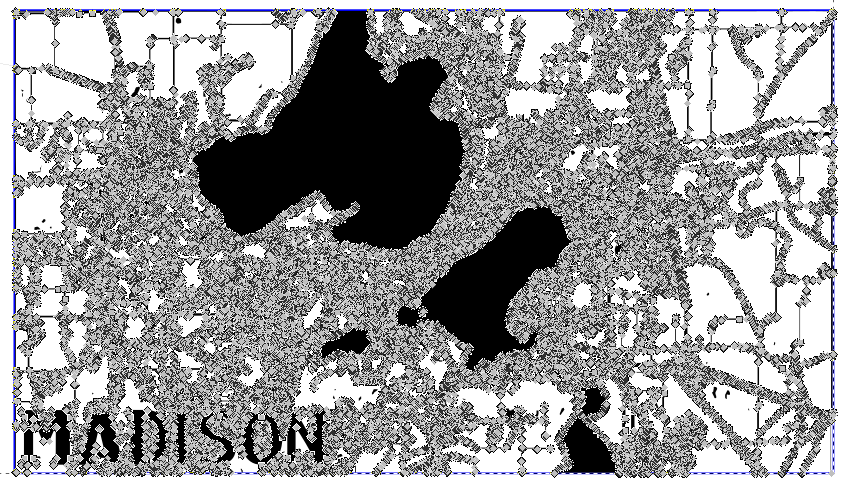 What software are you using for design? You could just rasterize it and engrave the image, that should speed it up.

So…will it eventually be ready to print or do I need to do something else to the file to make it easier to print?

I’m using Adobe Illustrator. Can I rasterize layer 1 (with all the streets and city name) but leave layer 2 alone so it will still cut? (I hope that made sense.) I’m normally a Photoshop and InDesign girl. Illustrator is a whole new learning curve.

Well, the glowforge determines the number of operations by color, so a vector cut line in a different color will show as a separate operation on the left sidebar.

I rasterized Layer 1. Both layers are separate colors. I reloaded the image…and it worked! YAY! Only an hour and 39mins until completion. LOL!

he doesn’t think I totally forgot our anniversary was this weekend. Shhhhhh…I did

Wow. That’s supposed to be a guy thing.

Haha. I know it’s Father’s Day. That I had covered. You’d think I’d have also planned for the anniversary that falls on the same weekend…but nope. I’m blaming it on the excitement of the Glowforge arriving.

Wow. That’s supposed to be a guy thing.

Glad to see your print working correctly. Expect every project for a little while to be a learning experience, which makes it fun and interesting while being productive.

As to that ‘guy thing’. I got the golden ticket.
Wife birthday, our anniversary, and Christmas are all in December. I know for a fact I would have missed all but Xmas 49 times by now otherwise.

My vector maps also take up to 15 minutes to prepare for printing. It’s normal.

Wife birthday, our anniversary, and Christmas are all in December.

A Little late for planning but I think major holiday weddings are a very smart move.

You didn’t forget … You just wanted to wait until you got it worked out with the Glowforge.

Happy Anniversary … And welcome to the forum!

We had ours the Saturday after Thanksgiving.

Yes I was thinking Easter would be a bad choice for that reason,

Thanks for jumping in so quickly to help, @PrintToLaser. And that’s right - there is a problem with our software in handling very complex vector files (usually those with a great number of individual nodes), and it looks like that’s what was happening here.

I’m glad to hear you were able to resolve it. Happy Anniversary!!