This is a consistent problem since I started using AD that the images come out larger. Any suggestions?

you were to fast, I was in the process of making a template for you.

The problem with SVG is that most programs assume that if you’re saving to SVG then you’re planning to use it on the web, so they use pixel-based dimensions rather than real units. (SVG supports real units, but for some reason most software that creates SVG files flat out refuses to use them when saving to SVG.)

Different programs have different ideas about how many pixels there are in an inch, so things change sizes.

I use a preset in Affinity Designer that sets the document size to 20"×12" and the DPI to 96, but then I still usually save in PDF just to be safe. (Saving as PDF also gets around a few other potential problems, although it also introduces a few. But for most files I find PDF to be more reliable.)

I’ve had issues with PDF as well, so I stick to what I know :-). I like the idea of the 20x12 and then laying out a bunch of stuff together. I’ve tried it before, but the problem I’ve run into is that if I get too close to the edges, the GF refuses to recognize that there is any artwork there

GF refuses to recognize that there is any artwork there

That’ll depend on what you’re doing with the stuff - the borders change between cut and engrave, and between engrave speeds. As long as you have that 20x12 though nothing will change size even if it’s outside the space - and it’ll show up in your GFUI off the board, but you can grab it and move it easily enough.

The gotcha with the 20x12 is that you can’t fill that completely. Max cut area is something closer to 19.5x 10.5, varies slightly with each machine.

Right. The point of making files 20"×12" is to prevent the Glowforge from misinterpreting the size if it’s an SVG with the wrong DPI setting. It’s not the actual size of the cutting/engraving area.

FWIW, here are the PDF and SVG export settings I use in Affinity Designer: 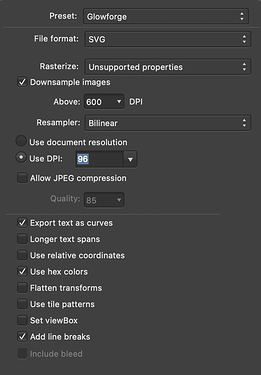 You’re probably using a version of Inkscape that defaults to 96 DPI. Prior to version 0.92 (released in 2017) it defaulted to 90 DPI instead. SVG files created with Inkscape version 0.91 (or earlier) show up with the wrong size in the Glowforge interface (unless using the magic 20"×12" size).

Affinity Designer defaults to 72 DPI for compatibility with Adobe Illustrator which also uses 72 DPI by default. (Or at least did? I haven’t used Illustrator in years, so I’m not sure what its current default is.) Hence the need for AD users to either change the DPI setting, save to PDF, or use the magic 20"×12" size.

No, definitely. It’s three-four years ago and multiple versions ago

Ancient history at this point.