For yet another of my hair-brained inventions, I need a permanently tacky surface in small sheets.
What I need to do is coat the edge of a disk (think tyre on wheel), with a surface that would retain its tackiness.
It’s part of a transfer mechanism that controls the movement of a very fine silk thread through a knitting type process. So the thread will continually be laid on it, then pulled off about 90 degrees later, as the wheel rotates.
I’ve googled the problem and discovered that Northstar Polymers make such products, but only in terms of the raw materials for creating large quantities of the polyurethane gel.
Does anyone know of such a material, already marketed in small quantities, preferably in sheet form ?
All I can find seem to find are products that advertise just how strong they are, which is just what I don’t want !

I’m probably way off base. But what about those little “sticky hands” that kids get from vending machines? I know if you wash them, they become sticky again. I think they are permanently tacky.

It would be fairly cheap to buy some, cut them up and experiment. I’m not sure if they’ll be tacky enough.

Might work.
Want I don’t think will work is the sort of open celled mat that forms a high friction surface, used on sloping shelves, like dashboards, to keep your phone in place.
I’m looking for a gel-type surface.
EDIT
Had a look online at the hands, and they are a gel, but unfortunately variable thickness. Now if it had been a uniform sheet, I think they would have done the trick.

What about natural rubber? How big of sheets are you looking for?

The ones my kids had seemed to be fairly uniform in thickness (like they had been cut from a sheet, rather than molded). There are probably different kinds. I’m not sure what size you need either, so they might not be big enough.

This might work, My daughter has it and it is the strangest stuff.

GOATsquare (Compatible With Any Phone Model)

Get this GOATsquare to turn any phone in the world into an Anti-Gravity phone! Get yours today!

Does it really need to be sticky? That’s going to pick up all kinds of dust and lint, and won’t remain tacky for long.

A smooth (think polished surface) silicone sheet will be quite grippy, yet not tacky.

Thanks everyone.
A single piece 8"x8" would be more than enough for my experiments, and it would only be used in short runs, so time enough to remove for cleaning if necessary.
Window clings sound interesting, ditto natural rubber and fresh silicone ruber.
Lots of alternatives for me to try.

) only about 50 miles away that make something similar to the Northstar product, but in strip form !
So sample request going off.

You might also want to look into the kind of one part RTV silicone used for gasket making.

It is easy to find in tubes at an auto parts store. You can apply it in a bead on the wheel, smooth it out before it cures and end up with a grippy surface. It can be trimmed with a sharp knife after it sets.

The best part is that you don’t need to worry about adhesives and having the cut ends of a sheet material causing gaps (or pulling off the wheel).

This is one example, but there are lots of varieties with various hardnesses and other properties.
https://www.permatex.com/product-category/gasketing/gasket-makers/

Good thinking re cut ends of strip.
Thanks. I’m familiar with the bath caulking type of product, but do you think the gasket formulations would be more ‘tacky’?

You beat me to it! this is exactly what I was thinking, I have used this stuff on so many different inventions through the years and it has never let me down (10 years of making thousands of prototypes).
this is the other thought I had, construction boot cleaning mats: 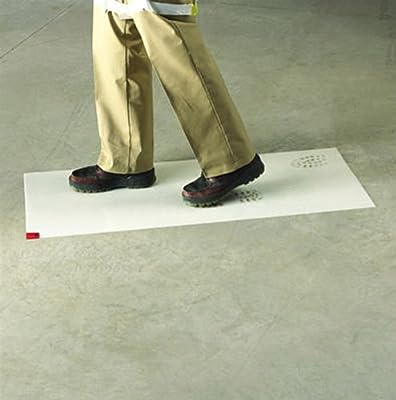 The clean room sticky pads, at least the ones we use, are very sticky when new. Ours are blue, not white. Maybe too sticky for what John wants??

LOL this always reminds me of this

OMG ROFL, but not sticking down !

A little more by way of explanation.
I’m trying to recreate this, a silk fan leaf edging.

It’s made of very fine silk, and there doesn’t seem to be a machine that can do it, and I might need several tens of yards, if all goes well.
I have made contact with several museums - the frame knitters, the lace museum and the guild of knitting and crochet. So far the consensus seems to be that the original was hand made, but that is obviously a no no.
So, a machine it will have to be.
My current thinking is along these lines.
There is a battery powered, hand held sewing machine that produces chain stitch.
With a spool holder that works like a ball point, but dispenses a silk thread instead of ink, ‘draw’ the design onto a tacky surface.
This surface is actually two belts, slightly separated by 1mm or so, running around two rollers in parallel.
Half way between the rollers, the sewing machine sews a chain stitch along the centre, between the belts, effectively trapping the design, which pulls off the belts at the far end.

I said it was hairbrained, , but the alternative is to build a three needle warp knitting machine, not a task that I really have time for, but would produce the correct edging.

Have you spoken to any bobbin lacemakers?

Yes. I used to make Honiton lace myself, many years ago.
Designed fan pricking for lace makers, and my late wife used to run a mail order business selling glass beads to lace makers.
Hence, the 50kgs of beads mentioned elsewhere !

Cool! I’ve been to Honiton. And done a tiny amount of Torchon lace making (and I mean TINY!)

Yes, that was one of the first things that came up when I started searching.
However, from the info on the NorthStar Polymers site, I got the impression that the gel used on those would be too strong. At the far end of the m/c, I need it to almost fall off the belts. It will distort rather too easily I think.
EDIT
Here’s my first photo of the silk leaf, now just taken off its sticks.