Tear down of an ancient calculator

I know there’s a number of us who will think this is cool. 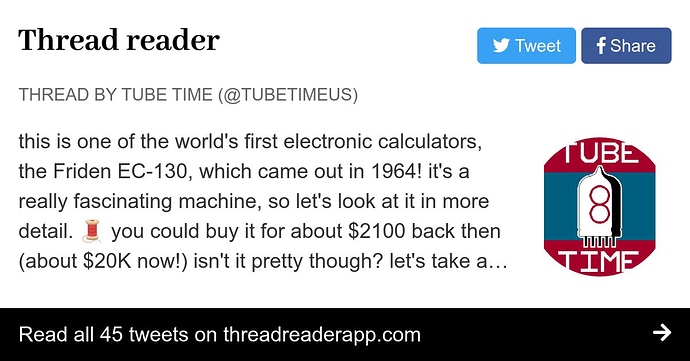 Thread by @TubeTimeUS: this is one of the world's first electronic calculators, the Friden EC-130, which came out in 1964! it's a really fascinating machine, so let's look at it in more detail. 🧵 you could buy...…

Remember working with a mechanical Frieden programmable calculator in an office called the Systems Analysis Group. Have to admit I spent way too much time programming the thing to get an repetitive “Ka-chunka, Ka-chunka, Chunk, Chunk” sound to match my favorite rock song. Yeah, I was a 17 year old civil servant.

It’s really cool to see the transition from mechanical to electrical designs during this period. The people developing early electronic devices were absolutely brilliant.

@evansd2: Interesting article. Amazing that something like that still works after >50 years! Not how electronics are designed today…

I remember using and abusing this all-mechanical Friden “beast”, to divide high-precision numbers, calculating undergraduate physical chemistry lab results at UC San Diego in the mid-1960s. A slide rule and/or log tables were not good enough for this. 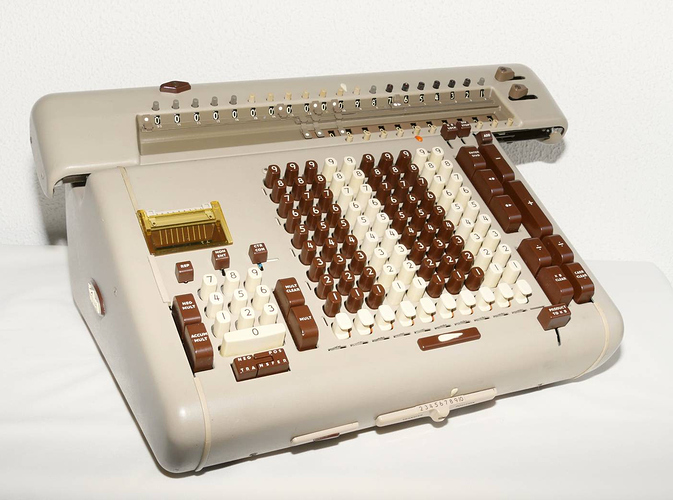 It got me involved with computers at age 17, teaching myself FORTRAN on a CDC 3600 mainframe using punch cards—literally overnight—after I got the Friden into a divide-by-zero infinite loop late at night. I did not know about the “secret” clear lever on the back of the machine! I unplugged the Friden and headed to the computer center where I’d heard that undergraduates could use the CDC mainframe for free. I’ve been hooked on computers since that night.

I think I still have my old CRC hand book somewhere. At the time it was a status symbol how old your CRC handbook was and they were often prominent in the professors’ offices.

Still have my mentor’s CRC book from the 50s and mine from 1972. Have zero need for them but, given how much of my life was lived within it’s pages, just can’t throw them out.

Have zero need for them

There is still information that you might find with Google but that has become increasingly hard, as less and less is posted without some advantage to the poster. financial or otherwise.

Have zero need for them but, given how much of my life was lived within it’s pages, just can’t throw them out.

I used to argue (just for fun) that the Japanese were playing a very long game to retake the world by making cheap calculators that did more & more until we didn’t need our reference books anymore. Then when those were all retired to dustbins, they started changing the calculation chips by very tiny amounts. Over a century all of our infrastructure & tech will have been built using invalid constants and bad arithmetic calculations and the West will come crashing down. Their calculators & chips are of course correct so their infrastructure & tech are built correctly

I think I still have my old CRC hand book

I haven’t given my real live books a thought for a long time. I have to take some time to peruse and actually pick-up and re-read some of them soon.

a section of my library with some of my favorite books: 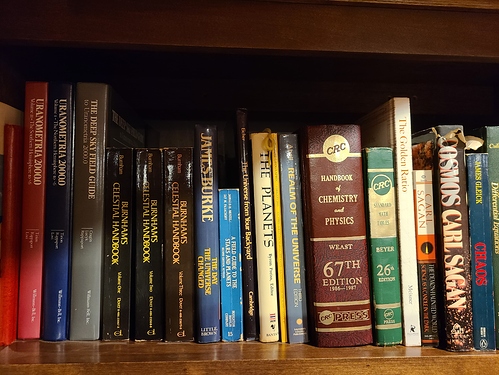 Maggie had to check them out too. 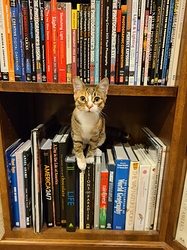 Wow, your top bookshelf looks very, very similar to mine. Or at least it would if my books were actually on the shelf. Lots and lots of astronomy reference books, amateur observing books, telescope making books, and specific reference books from my early days of engineering study. Just put my telescope back in the dome last night after a thorough, every 10 year, cleaning.

Was planning to look at Mars last night since it’s at the closest point. Nope, cloudy. Tonight will be a cool, crystal clear evening here in the mountains. Though the moon pops up at 11pm.

I too still have my CRC math tables handbook. Had a cal prof but an integral on the black board once and asked the class how do we solve this equation. I pull the CRC handbook out from under my chair and replied, “you look it up it”. In his dry humor he replied, “wrong answer” and then turned back around and proceeded to solve it.

He was a very sharp person, but was strictly theory. Someone once asked him how would you apply to the real world. His response was go to the physics department if you want applied mathematics. I actually learned more in a semester of mathematical physics than three years taking Dr. Duke’s classes in the math department.

In his dry humor he replied, “wrong answer” and then turned back around and proceeded to solve it.

I had something similar. There is a formula for lenses that I did not know so I did it by trig. As it happened one of the points was very near a focal point so a tiny difference in decimals made wildly different answers (and I don’t think the professor realized it) so my answer was twice his (and more accurate) but I still failed the test.

Since I discovered the world of Lasers, 3dprinters woodshop tools…etc. I haven’t spent very much time in the last years under the stars unless there is an event to see. I used my very first summer job to purchase a decent telescope. My Dad hired me work in the warehouse (a.k.a floor sweeper) but instead of paying me, bought a telescope at the end of the season. It’s the Meade 8" SCT that I have today.

Even though I don’t open them up very often currently I still really value those books. I remember Uranometria 2000.0 coming out and how it blew my mind with the scope of it. I had to save up to buy the three volumes and then I spent hours studying it’s pages.

had to save up to buy the three volumes

Mine is still one (very large) volume and I can easily imagine that the needed to increase that, though dumping the Log tables would make a big difference. But looking at folks older copies, they were much thinner as new discoveries continued to be added,

I find it interesting that the time of acceptance of the earth plate theory is today considered many years before I was born but it was still controversial when I was in College, and I have textbooks that say it the old way.