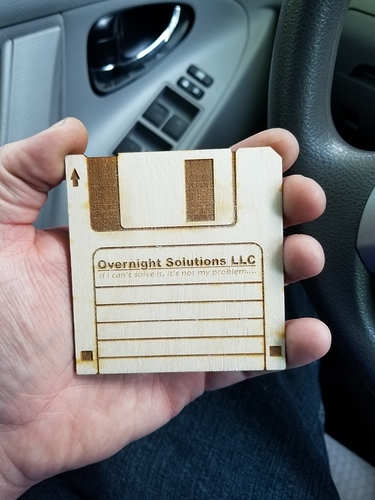 More durable storage than the original

. I just got rid of a bunch after cobbling together a drive.

Now if I could just find a 8" floppy drive in working condition… And a MUMPS system image.

Look, a save icon LOL

Look, a save icon LOL

I wonder how many younger people have no clue as to what a floppy disk is. Lol

I wonder how many younger people have no clue as to what a floppy disk is.

Most - at least from a practical matter.

Think about it though - the children who will never see a CD except as an historical artifact have already been born. DVDs are likely only a few years from practical obsolescence as well. Thumb drives & tiny cards likely have a bit longer to live but cloud storage is becoming mainstream & the norm for a new generation.

see a CD except as an historical artifact

Not if they go into medical devices.

Not if they go into medical devices.

While possible, it just means it’s a case of “historical oddities in an antiquated industry”.

It’s hard to get young people interested in pursuing or continuing careers in jobs that don’t keep up with tech.

A safe bet. A few years ago the 326 MB of documents would have been printed and boxed up.

children who will never see a CD except as an historical artifact have already been born.

I was trying to tell my granddaughter a funny story about one of her uncles and a stereo, recently. By the time I had to interrupt my story to explain what a “stereo” was, and then again to explain what “records” were, and yet again to describe a “knob,” the story had lost all its entertainment value.

Hmmph. The medical industry still thinks faxes are secure but email isn’t. (But only SOME faxes.)

I frequently send faxes to pharmacies from my phone on my days off, when care facilities need new orders and I’m not somewhere with access to printers and scanners and fax machines and (most important) people to do all the fiddly bits for me so I don’t have to. Recently a nurse happened to mention to a pharmacy that they should be expecting a fax from me because I had just sent it from my phone, so they refused to fill the prescription because they said faxing from cell phones isn’t “secure.”

For the most part, the millions of computers used by the U.S. Defense Department don’t allow the use of USBs, memory cards, etc. Can’t connect MP3 players or other unapproved devices. Try it and security folks will be all over you. CD/DVDs or enterprise managed uploads are the only approved methods.

Our facilities would not allow wireless connections of any type.

My 14 yo computer geek son was estatic when our DMV finally upgraded their computers to windows about 5 years ago…everytime we went in he was so concerned that they had to use old texted based systems…lmao. Btw, he knows what a tape drive is too…
Funny that he loves that old stuff. So, there are a few youngsters who know our struggle from long ago…lmao
BTW, if you like old computers, Seattle has a great old computer museum not far from GF headquarters.

Way back in the 90s I bought a refurbished fax machine, answering machine, phone, because it was just a little more than a new answering machine and back then having a fax machine was occasionally useful. Someone at a local company that made large agricultural processing equipment typo-d their fax number as my home phone number - a number I had had for years without any fax machine squealing coming across it. As opposed to my first real job out of college where my phone number had very recently been the HR number for retirees of the Mpls newspaper. I called and left messages asking they change their number. Eventually I gave up. The early AM faxes from Denmark in regards to steel quotes was just something I sometimes woke up to. Then they gave out that incorrect fax number to the lab that did their urine testing. With the possible exception of some transportation positions I’m opposed to drug testing new employees, plus I’m not particularly curious and finally I am aware of HIPAA so I destroyed those faxes. However, I will admit they are more secure than email. Because when I was trying to sort the actual faxes from this company’s junk, I couldn’t make out the test reports. I think they were a copy of a copy of a copy sent through a poor quality fax machine. They were illegible, so in that way, they were secure. It didn’t end until I gave up the land line several years ago.

Our facilities would not allow wireless connections

I got into a discussion with an engineer retired from a nuclear power plant. He is incredulous that I want to hard wire the TVs in the classrooms. “Everything we had was wireless. If we needed expand access to some part of the facility, they just added another access point.” I was surprised they had wireless at all on campus.

I’ll run the cables myself if it is cost that they are worried about.

But maybe I’m a luddite when it comes to wifi.

Wow !
I’m shocked to read the word ‘luddite’ from USA. I think of that as a strictly UK expression, so I continue to feel at home !
Thanks,
John

Interesting to me. Though I know the word luddite, it’s certainly not part of my everyday vocabulary.

I taught both World History and Technology for high school students. I tried to make the connection between the Luddites and the Industrial Revolution and the modern digital revolution and those who might be left behind by it. The students never quite got excited about it as much as I did.

I am careful of its use since I do respect the situation of those whose livelihoods are displaced by a new technology. It’s a great lesson.

Oddly enough I’ve used this term for a very long time. Virtually every industry (Finance, Internet, System Integration, Security, First Responders) I’ve migrated to had them and I migrated again. Now we need a new term for those who profess to modernize and passive aggressively refuse to.