The Dreaded and popular stuck on focusing

My GF performs beautifully for one cut, then has to be shut down for 5-10 minutes before it will get past the focusing stage, with the tick coming from the head trying to focus. It has gotten progressively worse over the past few days. I have cleaned everything , every lens, every connection multiple times. I’ve reset my wifi. I’ve prayed to the Laser gods… but it’s every single time it completes on task, I have to cut the power for increasingly longer periods of time.
Any suggestions?

I’ve prayed to the Laser gods…

Well, if that didn’t work…

Kidding. It sounds like you have tried the cleaning routines…is it a Basic or Plus model? Those might tend to pause to cool off if they are operated close to the temperature limits, but they normally will display an error message on the app. Are you seeing any error messages?

It’s a plus model, but I keep it in the mid to upper 60’s in here at all times… No error messages, just getting stuck in the focus stage, with the constant ticking of the print head attempting to focus. I did notice some small scratches/swirls on the print head lens when I got this thing, and I thought it may be that they have worsened. Upon inspection, they seem unchanged, and I got to thinking that, if that was the problem, it probably wouldn’t focus even after a “rest”.

And it’s not like it’s from extended use. I can leave it powered down for hours, come do one 8 minute engrave, and it gets stuck on focusing afterwards.

Hmmmm…okay, well one other thing to check is the integrity of the cables and the connections…there have been a few problems lately…check the connections at all five of the areas circled in red below…if you see anything not closed completely, go ahead and carefully close it.

Then look closely at the area circled in green…if it looks worn on the back or has a bend or kink in it, take a picture and post it here. 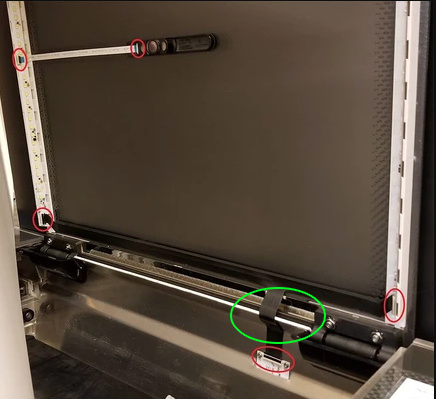 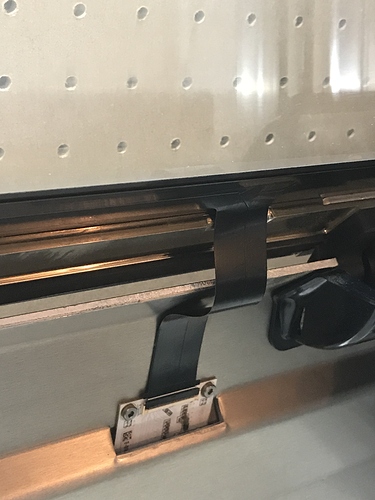 I’m no authority by any means, but that doesn’t look quite right. Looks a bit scrunched. 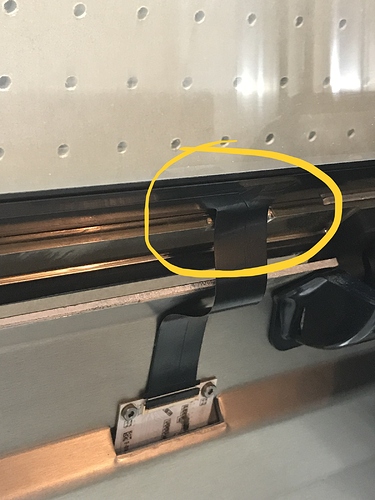 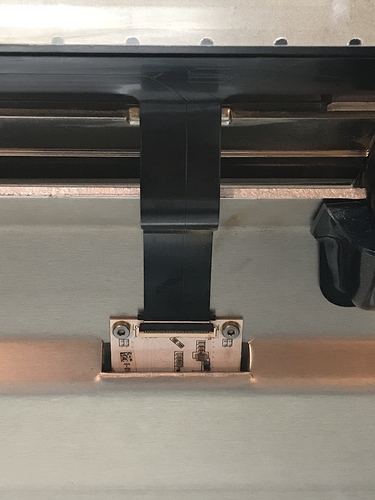 Not sure…that looks like a pretty sharp looking bend in the first photo, and that might very well cause a problem over time - it would flex the wires inside and weaken them. (It’s an easy fix if that’s the case, but support will want to take a look at it.)

Can you get a clearer photo slightly from the side? 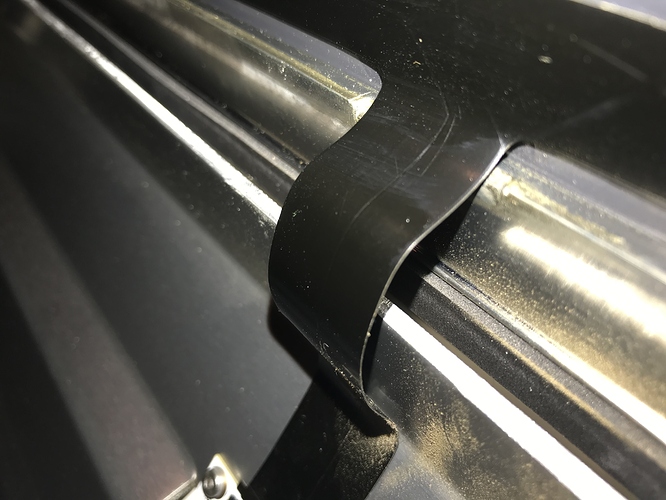 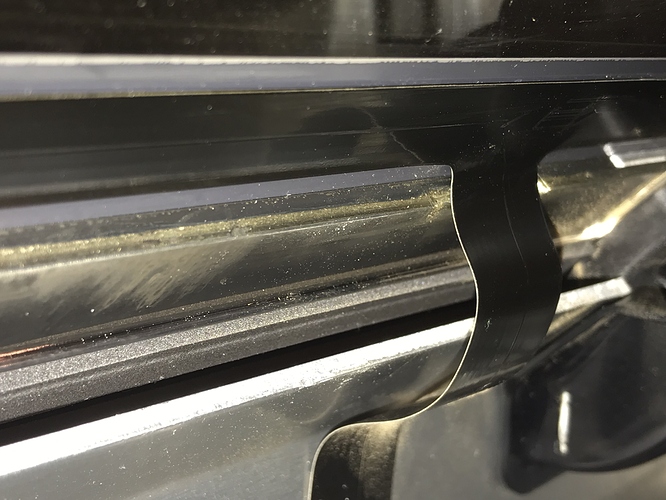 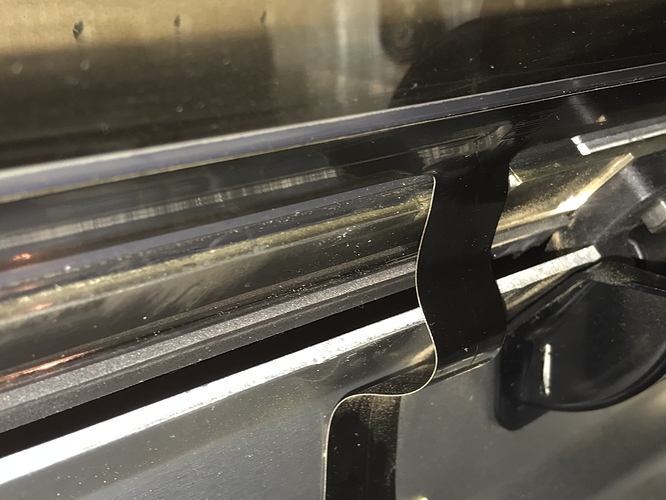 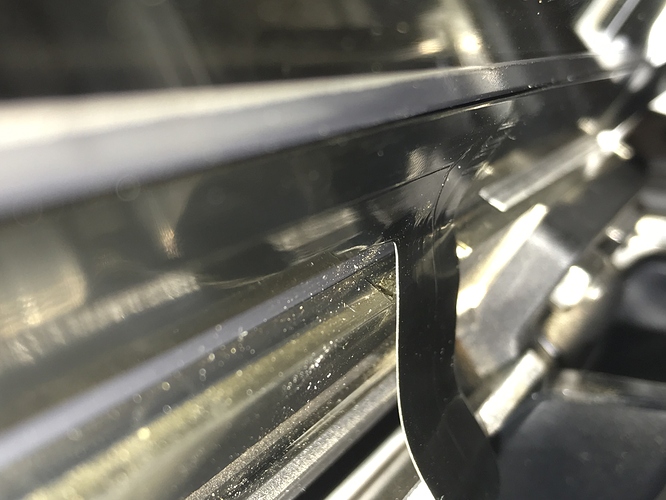 No…that might be okay…I think it’s just a reflection showing in the shiny tape. Okay, thanks!

I think it’s possible that its in the white ribbon cable going to my print head. It never gives me that satisfying “snap” when I connect it, and you only have to bump it a little for it to come loose and give me that orange start button…
Usually, if I disconnect and reconnect, it will give me one more task… then I have to do it again after that single task. I’ve inspected for bent or missing pins, and see none. And I could be grasping at straws…
BTW… Thank you both for helping me try to figure this out.

Uh-oh. Yeah that could definitely do it…did you pass that information along to support?

Is there somewhere else I need to submit this problem to? I was under the assumption this was the “ticket submission”… and the white ribbon cable is a new theory that I’m testing as we speak.

No this is fine. Some people also email Support, but it really is better to only create one ticket for them to deal with. (It’s quicker.)

It might not hurt for you to take a photo of the top of the white ribbon connector - there is supposed to be a little latch on it…I’d like to see if it’s intact on yours. 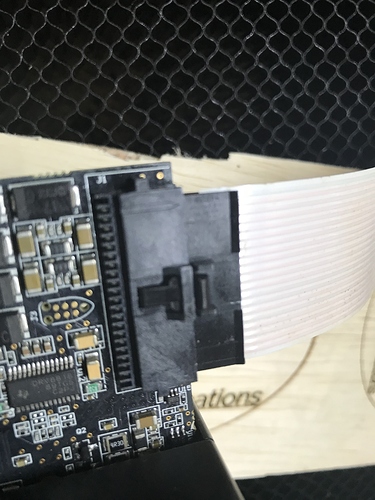 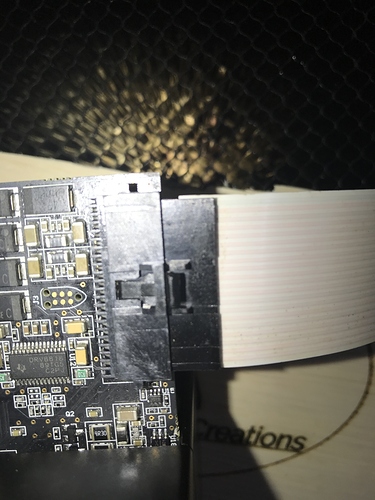 When you remove it, do you have to use a fingernail to push down on the little latch before pulling it out?

It looks like it might not be pushed all the way in…check also inside the receptacle to see if there is anything in there that might be blocking it…check for bent pins, and if you don’t see either, try pushing it all the way in. (It’s not easy to do, but that’s on purpose.)

Not usually, and this was the basis of my hypothesis. No matter how well I think I have the cable attached, it doesn’t always stay that way. However, I’ve now tested it three times, and all have failed to alleviate the problem. I now have the cable firmly attached, and it still won’t focus.

Now that it’s attached, turn off the machine, reboot the router, the computer and the machine (wait a couple minutes) then turn the machine on and let it run through the startup calibration again.

Before you do, shift the head back to the home position, or fairly close.

Did all that, but the machine won’t even go through the startup calibration, just says focusing. When I let it sit for 10 minutes or so, it will usually finally get past the focusing stage and go through the calibration sequence…