I am not sure what is going on with my Glowforge, but it’s venting a ton of smoke into my room. I have a 2 foot run of super insulated venting, going out hole cut in a sheet of wood. On the interior of the window, I have put up a plastic sheet and taped around the window to keep the air from coming back inside.

When cutting, the Glowforge creates a lot of smoke and very quickly the room is filling with it. I am running an air purifier in the room to keep the smoke down, but I am still getting a lot of smoke.

I replaced the tube that came with the Glowforge to this super insulated one: https://amzn.to/2Gq6Ywh

I think the problem may be with the machine. There is light visible through the side of the front door as if it’s missing some rubber stripping. Also, the pass-through slot rubber strip doesn’t securely cover the door area.

Anything else I should check before submitting this to support?

Your fan more than likely needs cleaning. I’ve had some smoke coming out also at one point. The official recommendation is to to use a vacuum cleaner extension and suck out what you can (from the backside - remove your vent and vacuum against the grill).

I used some pipe cleaners to help it along but I can’t recommend that. It worked for me though.

When the fan is clogged, the pressure of the system changes, basically. It’s not able to evacuate the air it needs to maintain negative pressure, so it finds those outlets at the front of the case.

Oh, and when life gives ya smoke… buy a brisket.

Running properly there is supposed to be negative pressure in the cutting area. If there is not there are many places that would leak the smoke. Therefore there is likely too much resistance from the fancy insulated venting while there is a lot of heat focused at the place the laser is working it does not add a great deal of temperature to the air unless you have started a roaring fire,in which case you have other problems.

At this point however a fan at the end of the window end of the venting is probably the simplest and cheapest options as there is too much back pressure without it.

If it was venting OK before and then recently got really smokey, then @jbmanning5 is likley right and it’s usually a dirty fan. If it’s never vented well, then it’s probably a faulty fan or you don’t have it set up correctly. (FWIW, the hose that came with it works fine and you shouldn’t have to use a different one. ) Hopefully support chimes in soon and can help out.

I think the problem may be with the machine. There is light visible through the side of the front door as if it’s missing some rubber stripping. Also, the pass-through slot rubber strip doesn’t securely cover the door area.

This is perfectly normal and is not the problem at all. The GF doesn’t need to be airtight as the fan creates negative pressure. @PrintToLaser explained it well so there’s no reason for me to reinvent the wheel

Well heck, I can never get the links to work well. Here’s what PrintToLaser had to say…

“You will only need to clean that fan grill after extended use, I had over 2,000 pieces engraved before it was needed. The exhaust creates negative pressure inside the machine, so any cracks like the lid or front door are pulling air in unless there is a restriction in the exhaust. Concentrate on sealing the duct connection to the machine. That duct is pressurized from the exhaust, so any cracks there are going to leak. With a sealed exhaust there is no smell except when you open the machine, or the residue on the work. A booster is a good idea, just mount it at the end, like right at the window.”

it’s venting a ton of smoke into my room

You will find this when you remove the exhaust tube. 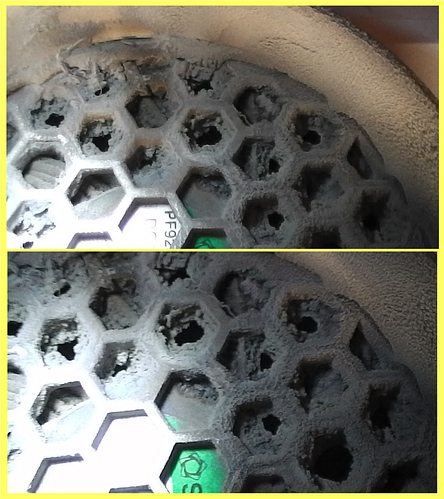 I have had this issue since I got the machine. I was told previously that the smell/smoke was from the sub par exhaust tube that came with the Glowforge. It’s only gotten worse…

I will check out the exhaust, but I’m very concerned with this not working and the problems I’m having with the proofgrade…

Actually I looked in the back earlier during the cleaning. My grill was dark colored, but I didn’t see any obstructions like what you had. I assumed from earlier posts it was more internal

Silly question; Does the GF sound akin to a hair dryer when it it is cutting? I.e. is the fan spinning up to deafening?

Actually, after the last cut I now have an orange light and the fan is making a strange noise. I will have to check it in the morning.

You aren’t blocking the sides of the machine, yes? You might be blocking airflow, though I’d still expect negative pressure then.

I’m betting you need to clean the fan…I just had to clean mine, and it’s not easy. Crap builds up on the blades and makes it run unbalanced, strain, and not vent as effectively. I was trying to get rid of some cheap goofgrade plywood and it started straining in the middle of a long engrave - no telling what was in the glue, but it wound up sticking to the fan blades pretty badly.

Get some pipe cleaners, a vacuum with a brush attachment on the hose, and some canned air.

(I’m planning to start a monthly vacuum of the fan to keep that buildup from happening…can’t be good for the fan.)

If you are just using the wire hose clamps that came with the forge, you are probably leaking around the connection at the forge and at the window. Get some good duct tape, or that aluminum HVAC tape and completely cover both areas.

Thanks for letting us know about this. I’m sorry you ran into trouble, and we’re looking into it now.

If possible, could you please send us photos of your exhaust setup?

The setup is pretty simple. Two feet of insulated vent tubing. The Glowforge has at least 6 inches of clearance on all sides. 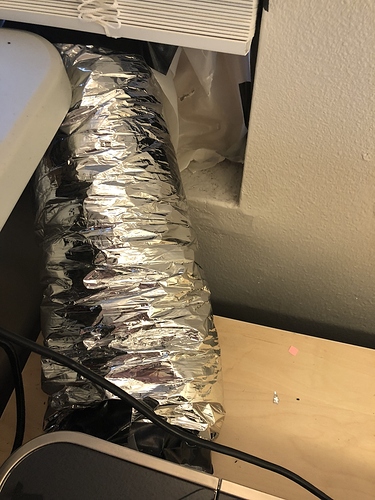 I checked the fan and it doesn’t appear to be obstructed.

I guess i should have asked - can you actually see smoke coming out anywhere? If you turn off the lights in the room, can you see anywhere the smoke is coming out (backlighting helps with this).

It seems to be a general issue. When engraving, there is a light smell. Once I start cutting, the smoke builds up pretty quickly. My air purifier turns bright red and after a bit, the room has a haze of smoke.

Is that your sheet of plastic taped into place? I might not be seeing that correctly, but it looks like there are holes in it, and that it hasn’t been completely secured with tape all around…just tape holding it up in one or two places. (In other words…doesn’t look airtight. You might just have smoke coming back into the room through the open window or holes in the plastic.) If it’s a double hung window, it might be coming in over the top.

And is this a hole in the vent tubing? 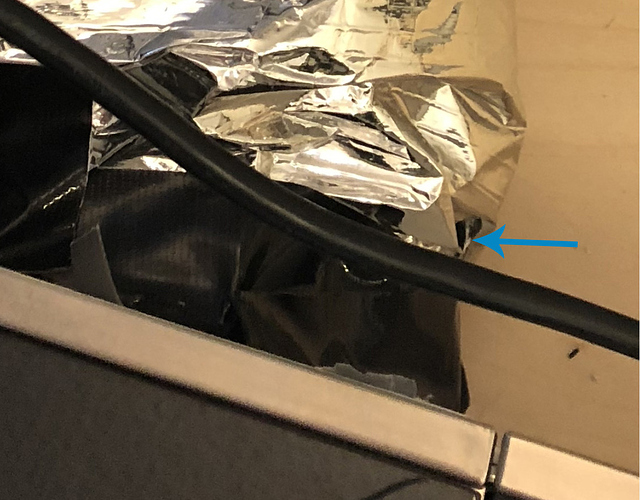 Several of the guys have successfully used a lit incense stick to see if they can locate the leaks in their exhaust systems…you might want to try that. While the machine is running, you hold the lit punk close to the problem areas and see if the smoke shifts from an air leak. I’d take a look at the window area, and that possible hole in the vent near the machine to start with. Taping that off (if it is a hole) might solve the problem. Insulation is not generally air tight…houses down here would develop mold if it was.

That’s a good technique though to check for problems with the exhaust setup. And a little aluminum tape works wonders for patching small holes. You want a tight seal all around the venting setup.

The exhaust fan in the GF is pretty high volume. But it’s not a very big fan so the velocity is high. I don’t know exactly how high, but the air in the exhaust duct is going to be at a higher pressure than the air outside the duct. That means that smoke can and will escape from even the slightest pinhole leak in the duct. The duct needs to be really tightly sealed to the flanges at both ends and there can’t be any holes anywhere between the GF and the window vent.

I can’t really see how the duct is connected and sealed at each end from the photos, but it looks like there are probably some opportunities for improvement. Think about what would happen if water was flowing through the duct. If you don’t think it’d be water tight, it’s not smoke tight either.

I’m assuming what you picture here is the outside insulation layer and that inside that puffy sleeve there’s a standard 4" duct? The insulation layer is not necessary and it hides the inner duct, which is what has to be airtight. You could have a hole inside the sleeve somewhere you’ll never see. I’d peel that insulation stuff off, it’s just getting in the way. Alternately, you can get an 8’ metalized dryer duct at Home Depot (or similar) for $15, that won’t have an insulating layer, and try that.

Approximately 200cfm and 30mph at the grill.