The orange button of death!

Ok so heres my issue!
So my glowforge is a plus model and I was doing a print all fine and dandy, (custom popsicles sticks) when it had an orange light appear and it said cooling in the app, so ok cool, figured I’d let it cool but was pushing close to an hr so I was like something isn’t right, so I message customer support like that app suggested “if cooling persists turn of the machine and try again, if it still isn’t working email customer support” I paraphrased but it was something a long those lines. I turned the machine off walked away and went to work, 5 hrs later figured it would definitely have been cooled down, had the ac on a ceiling fan on it, and another fan point to an exposed under intake fan; still not working. The temperature was 75 degrees at that time, maybe I thought it was still to close for comfort… customer service messaged me back and gave me the whole copy and paste thing of the cooling system and what to do, I did it all and I also moved the glowforge to another more open room still have a ceiling fan and if you look at the pictures I attached a fan pointing directly at the air intake. I removed the exhaust hose as to stop any hot air from entering the glowforge, I even sat a bunch of frozen freezer bags in the bay to create a colder emviorment, atlas! I have it working at least for 2 hrs, then back to the orange light . Customer service responded pretty quickly, until I sent them the pictures 2 days ago of my set up and I haven’t heard back sense. Hence I am going here for help. I read I’m not the only person having this issue, I also saw in march they upgraded the temperature sensor, was wondering if the sensor upgrade messed up my temperature gauge. Still lots of confusion on my end as 12 hrs later its still not cooling. I tried everything 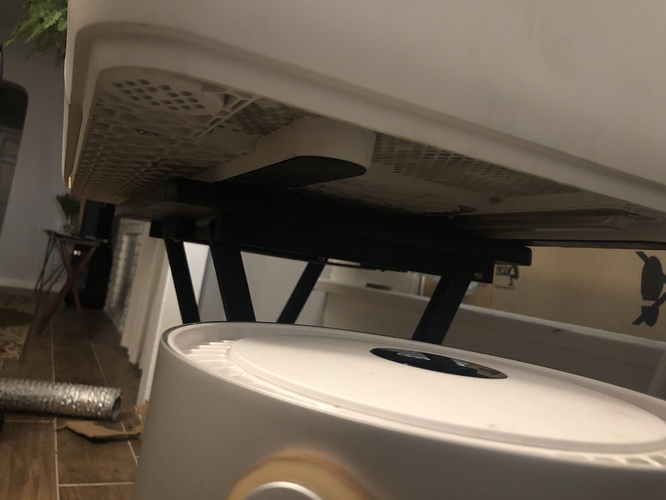 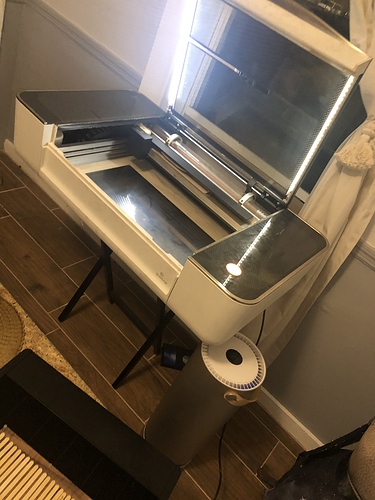 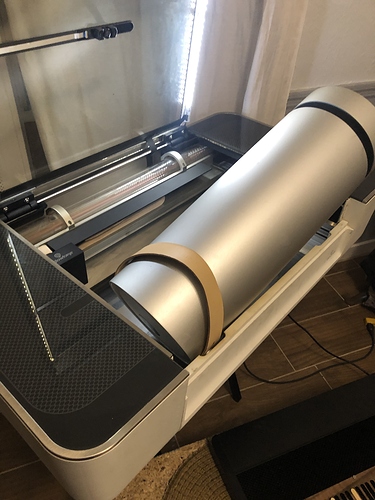 I wouldn’t say it messed up the sensor. I’d say you are probably right at the temp thresholds.

I like to keep the air temperature at least five or six degrees below the top of the suggested air temperature range to keep it running longer without pausing to cool down. So even if you can lower the temp around the machine to about 70° or 71°, your cooling pauses are going to be a lot shorter and less frequent. (And fans only move air, they don’t actually cool it, so it requires turning the AC down when you’re running the machine. Also helps to locate it under an AC vent if you can.)

The fluid inside the tube is what is heating up, and it has to slowly leech heat out through glass and plastic into a cooler environment. The cooler the environment, the faster that happens.

And in the meantime, if you need a separate place to hang meat…

I have 69 in my house with several fans on it and, hopefully that does something still currently not working.

Im actually way under the threshold, its 69 in the house with ceiling fan, and a fan under the intake,

Guess I misunderstood at the mention of:

The temperature was 75 degrees at that time, maybe I thought it was still to close for comfort

That’s going to be around the upper limit of the Plus and Basic, and it will definitely pause.

Air temps can be funny. The thermostat can be set at X and various rooms and even different locations in the same room will vary in temp quite a bit due to a variety of factors.

It’s possible your temp sensor isn’t working correctly. I would try and get a thermometer though and see what the actual temp is by the intake, and also the temp inside the machine. Sunlight, for example, can create warming inside the machine, even if the ambient air is in the threshold range.

And oh my dear lord, I just noticed…you need to put that on a heavier table! That is hanging out all over the edges of that little spindly thing…if it falls you are out several thousand bucks.

Yea “At the time” the time changed , the A’C got colder and I moved it to a different room and sat bags of ice inside the machine bay, even on top of the glass tube. Maybe the gauge is broken. Waiting for the glowforge team to get back with me and maybe pull some logs.

Don’t worry, I switched tables, just put it on that one so the fan can be pointed up under it.

I’m so sorry for the continued trouble. I just followed up with you via email, so I’m going to close this thread now. Thank you for your patience.