…so, I think I’ve just created a new subcategory; “Embellished on a Glowforge.” EOG. I spent all afternoon yesterday, making tests for settings……for some Proofgrade manual settings and also some for anodized aluminum, which is my new favorite thing.

Right after I had to return my PRU to Seattle, I received my order of bracelet blanks and was disappointed that I no longer had a laser to use on them. As fortune would have, I received my very own production unit only about a week later.

Today was aluminum day and it was interesting. All anodized aluminum is not equal, I can tell that right now. I have some business cards made of it and they are much nicer quality than the bracelet blanks. They also take an engraving much nicer, too.

Tried making a few bracelets today. Engraving was fine, with the exception of a couple files that did not translate to engraving that well. Not all that interesting though, for a piece of jewelry, so I thought to try some additional bling in the form of…….wait for it, wait for it… embossing powder! You heard it folks, my old tried and true go-to! I masked the aluminum and tried using it like a stencil……and even tried some foil. It did not work and looked pretty bad. Plus, you could scrape it off with a fingernail. Well, I had to at least try. Thinking that the bracelet idea was going to be spent, I had one last thought.

Markers. I have a huge bunch of colored Sharpies and one package of Copics. Markers didn’t work either over a mask…it just leaked underneath it. So, ta daaa!..…I colored the metal first! It doesn’t rub off and has this most lovely translucency to it. Then I engraved it. I sort of like them. The first one I made was the top one in the photo….it says ‘sleeping with the fishes’. I dunno…for some reason that just popped into my head. And because this was all a learning thing, what the bracelet said really didn’t matter. The middle one is my very favorite, but that’s the one that has the really weak engraving on it. The bottom one is for my friend, Pat. She might hate it, but that’s OK….I need folks to be guinea pigs.

Now I’m busy gathering more images so I can make some more. 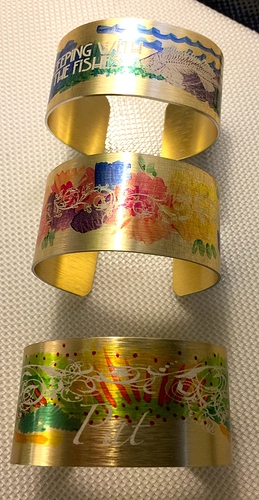 Ooooooo! I love these!

Those are pretty cool!

I love the “out side the box” thinking on these.

So you just colored them and then engraved over that?

Brilliant! And you just gave me another idea for metal: how about masking the metal, engraving off some masking, and infill with acrylic paint or, even better, the Vintaj metal enamels (I’ve got a few of those to play with). Thanks for the inspiration!

Those are seriously neat! Very cool font choice on that top one. I really love how the coloring turned out! Doesn’t rub off? Curious about when it’s wet. Would you mind sharing where you got the blanks?

That’s a really creative solution! I’d think that you’d ultimately want to give the final version a clear coat of some sort perhaps, as in my design experience Sharpie is “permanent” only up to a point and over time that will almost certainly wear off. Still, that is a very cool idea and the translucent effect is quite lovely.

Very cool font choice on that top one.

if you’re into such things, you may enjoy eaglefeather, which was developed in conjunction with the frank lloyd wright foundation (which doesn’t necessarily mean anything but i like to pretend that gives it credibility)

So you just colored them and then engraved over that?

Yes…I was surprised and pleased that it turned out. I just need to get past the testing phase and put out some that are much better. The markers worked like water colors. When they dry, you can put another layer on, even a different color, to make some really nice colors and shading.

No, the color doesn’t rub off. I made sure to test that right away, otherwise there would have been no point in going forward with engraving.

Haven’t yet bought any of these, but I like the option of colors, and may venture into that, soon.

The ones I’ve been using came from Etsy. Just do a search for anodized aluminum bracelet blanks. I bought gold colored ones and some black ones. Also needed a bracelet bending tool, but it was only about $6.

Oooh…now maybe you’ve inspired ME! Don’t have any acrylic paints or those enamels, but that sounds like what I was trying to do with the embossing powder. Obviously, not designed for metal, though. Going to look up those enamels. Thanks!

Very cool font choice on that top one

Thank you…yes, it’s one of my favorites, too. Paid good money for it!

The Vintaj paints go on sale at Hobby Lobby quite frequently for 50% off. Look in the jewelry parts section. Good luck!

I have not experimented with the Vintaj metal paints yet (keep meaning to) but I have tried a similar product called “Swellegant”, with good results.

as in my design experience Sharpie is “permanent” only up to a point and over time that will almost certainly wear off.

I agree, but with a caveat: it is very nearly permanent if you accidentally draw on something important or hard to clean/replace. I think it’s one of Murphy’s bylaws.

they also make sharpies that lay down paint these days, though whether they’re good, or even better than other paint markers, i couldn’t say.

Those are a lot of fun, I like the oil-based ones. Once the tip is saturated, you want to be careful to re-cap quickly when you aren’t using it, or paint will solidify in the fibers and you won’t be able to use that pen again until you swap the tip out. (You can, however, make your own tips from a chalkboard eraser. I have not had great luck doing so, but I know that others have.)

hmm, aren’t chalkboard erasers basically just felted wool? you might have a better time starting from that direction instead.

Possibly. That’s a project for another day…
I have had good luck replacing the MTN and the OTR paint pen/mop tips with eraser chunks.
(the acrylic ones dry way faster, which is great for painting, and a pain for maintaining the tips) 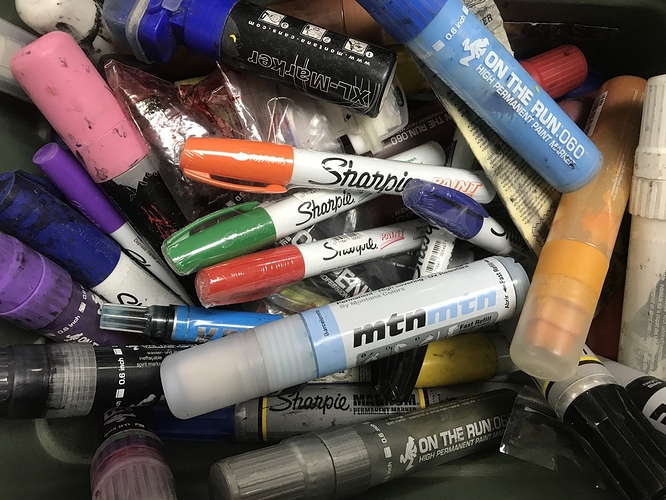 i don’t think you have enough