Been seeing the beautiful stuff engraved on wood, and was wondering if a light sand blasting would be helpful to remove any charring? But obviously it would destroy really intricate details; I’m talking about not intricate items…

I would look into soda blasting. Its generally cheaper (relatively), less abrasive and any particulate lodged in the wood can be dissolved with water after your done.

Sodablasting is a process in which sodium bicarbonate is applied against a surface using compressed air. An early use was to restore the Statue of Liberty in the 1980s. It is a very mild form of abrasive blasting, much milder than sandblasting. Sodablasting is a non-destructive method for many applications in cleaning, paint & varnish stripping, automotive restoration, industrial equipment maintenance, rust removal, graffiti removal, molecular steel passivation against rust, oil removal by saponi...

This portable soda blaster uses safe, harmless dry baking soda blast media instead of sand. A low-impact, eco-friendly way to strip paint, use this soda blaster to clean delicate parts, soft metals or to work in areas where other blast media would be...

I would love to see video of a soda blaster in action. As well as the results.

The HF page linked to has a video, plus there are heaps on YT.

Very cool! Will have to find scrubbing to be a huge pain before I could justify the cash for one of those when it could be used for more materials, though, but I could see that being a possibility.

Will have to find scrubbing to be a huge pain before I could justify the cash for one of those when it could be used for more materials, though, but I could see that being a possibility.

I’d say a mechanical clean like a magic eraser. But you are. Thinking of an irregular surface that’s engraved. Soda blasting seems plausible.

There are lots of useful blasting media out there, but wood is pretty soft and porous especially at the small scale we are talking about. The problem I would see with soda blasting is cleaning the soda out of the wood pores before finishing and I think that almost any media strong enough to remove the char and creosote would also badly blur the fine details. I would love to be proven wrong though since it sounds a lot easier than scrubbing!

Walnut shells are a common blasting media, not too abrasive.

Microspheres might work well for wood, the round nature would prevent the particles from embedding into the wood

Walnut shells are a common blasting media, not too abrasive.

I have no experience, but I’ve heard this to be true for many years so I have to believe it’s a good choice.

Hah! I had the same idea today, around the same time you posted this one. I must be reading the forums subliminally

I haven’t tried to use my crappy harbor freight sand blaster on cut wood. But I frequently use high pressure air to blow parts somewhat cleaner after I finish a job. It does nothing for the char along the edges (I rarely ever engrave, so cannot speak to marking on that).

If high pressure air doesn’t do anything, it is unlikely anything non-damaging as a medium inside the air will augment results notably.

But… in those cases where I wanted a clean edge AND a bevel… the sand blaster would have been the perfect tool to try out.

I wonder if a coat of latex would lift anything? I would imagine it to be pliable enough not to do too much damage. Whether charring would be absorbed into it, dunno.

what about blasting with dry ice? i’ve seen it being used as a safer alternative on brick (still a bad idea) but the bonus is no cleanup, aside from removed materials.

Ok, I’m I the only one that just pictured Mr. Freeze working at his glowforge 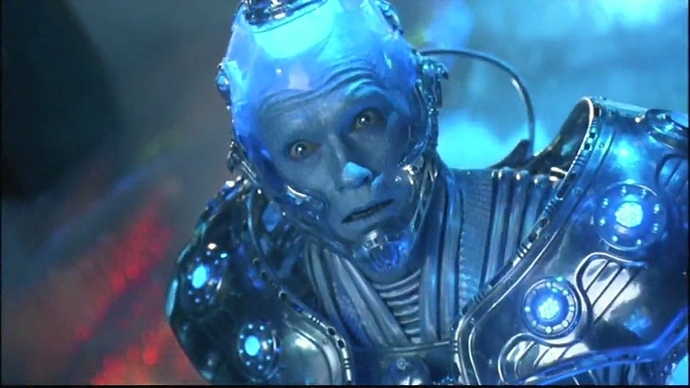 True, but I’ve got to love Arnie anyway.

True, but I’ve got to love Arnie anyway.

i certainly enjoy him more these days

Yea, I’ve felt sorry for him for all the flack on Celebrity Apprentice ratings. I enjoyed him a lot. When the president was hosting I seldom made it through more than one or two episodes. I think if the show wasn’t getting backlash because of Trump it probably would have gone up in ratings this year. - Side note, could they have more obviously stacked Boy George’s team for the win?

Has anyone tried a creosote remover?
http://www.bing.com/search?q=creosote+removal&src=IE-TopResult&FORM=IETR02&conversationid=

Has anyone tried a creosote remover?

Never even saw that before! That may actually work (and it’s advertised at walmart). They even have a dry version - or the spray…