I placed my GF order at 11:57pm on 9/28/15–three minutes to midnight–likely making mine the last order on Day 5. I happened to be reminded of this while running the sound board for a Tricky Pixie concert a couple of months ago where they performed SJ Tucker’s song that I’d always thought of as “Three Minutes To Midnight.” The set list had it listed as 1157, though, which led me to its actual title, “11:57 ('Til It’s Over)”. I thought it was an interesting coincidence since I’d recently looked up my order date/time.

Sooj writes (http://sjtucker.com/1157-til-its-over/) that she was inspired to write the song after a nightmare about nuclear war that she was reminded about by a discussion of the Doomsday Clock (http://thebulletin.org/sites/default/files/Final%202017%20Clock%20Statement.pdf). At the time the clock was set to 3 minutes 'til midnight. As of January 2017, the clock now stands at 11:57:30.

Doomsday, Lasers, Creativity overcoming Doomsday… it all fits together somehow.

And now that I’ve gotten the Email, I wanted to share the song with y’all, performed by Tricky Pixie (though not the concert I was at):

Most interesting “I’ve got the email” alert that I’ve seen so far.

Wait a minute…hadn’t you already announced that you had the email? If not, Congratulations!

I’m an old person (think Beatles to Eagles generation) and have never heard of Tricky Pixie, but I really enjoyed that. I’ll have to look for more of them.

Both Sooj and Alex have long solo careers and Alex has been in other bands. Betsy began playing on stage with various folks (including being on stage with most of the Filk performers at the Reno Worldcon in 2011 https://en.wikipedia.org/wiki/69th_World_Science_Fiction_Convention). In her solo performances and her albums she plays with a looper to create intricately woven pieces.

Congrats! Incidentally, '3 Minutes to Midnight’s is a wicked name for the forge! It’s a bit Halo I’ll grant you but still!

And now that I’ve gotten the Email

Got tracking on my box of

No tracking yet on the

I think this may be a first: I got my UPS tracking information from Glowforge before UPS has a delivery date. It’s not even showing up in UPS My Choice yet.

So I don’t know when yet…but it’s actually, you know, shipping!

congrats! Has anyone told you that time is fixing to go really slow for you? 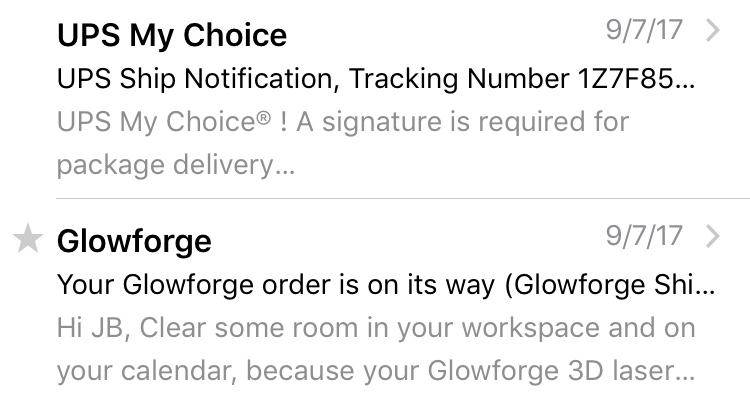 It’s currently sitting in San Pablo. Still no indication of when it will arrive…

I have a lonely accessories box pining for its big brother. UPS MyChoice was showing both of them arriving today–but the big box is still sitting in Portland. It got there at 6:56pm yesterday and has apparently not moved.

So… I got my glowforge, but it would not receive prints from the servers. It would calibrate just fine, but I finally got the “we need to replace your Glowforge” resolution.

So a bit more waiting…

Grr. Hope the replacement is soon.

Laserus Long, v2, was delivered today. All 4 handles and box in good condition. Laserus Long, v1, was picked up by Fed Ex 10 minutes after UPS dropped V2 off.

It’s all (physically) set up, but I am going to wait until after the windstorm here has passed. We’ve had multiple power blips today and I don’t want to stress test the Power Supply or get a botched firmware update due to an ill-timed reset.

As another of Heinlein’s characters would say: “Waiting is.”