Tips for using the Pro Passthrough

I got the email that my GlowForge PRO is being shipped. I am weeks away from the fun times.

I have a question. In the email it said that the pass through camera is not working yet. Has anyone come up with a solution for aligning the boards when they go beyond the set bed size yet? I was thinking a jig of some kinds. Wanted to see if anyone had other solutions.

Im happy, but not excited yet.
Eric

I anticipate making a JIG. Think of it as a channel that goes in one side and picks up again on the other side.

I anticipate making a JIG.

That’s my plan as well. Also putting off some of my designs that can’t tolerate a little inaccuracy. But I’ll be glad when the function is available.

The lid camera is pretty accurate right in the center, so what I have been doing is putting a cross centered on my artwork every 10 inches, Then draw the crosses on my board and line them up that way.

I’m thinking about engraving tick marks at the beginning and end of each scooch, so after the first scooch, the next set of tick marks is in the center of the Glowforge, since alignment at the far corners is not working at all right now.

The lid camera is pretty accurate right in the center

This seems to depend on the unit. Mine is off in the center. Not by a huge amount, but around an 1/8" or so, while it hits a little over a 1/4" in some areas on the edges.

I’ll try to look for the post when I have a little more time, but one way I’ve seen people work around this problem and not rely at all on the visual alignment (since it’s till getting sorted out) Is to make a jig that registers the maximum cutting width on the bed and then create your artwork in chunks exactly that size. it still requires you to register your piece of material ( 10" increments, or whatever) but some people have pulled off some pretty amazing alignment jobs.

My size boards are always 16 inches wide, so I think i cam make a wooden clap system that is adjustable and make something that goes around the Forge to lock it into place and have it always flat against the opening.

Thanks for the ideas. All are helpful. Keep them coming.

I don’t have mine yet, but I think this will work and not depend on camera [in]accuracy:

Place a guide inside along one side of the bed inside. Hold it down with magnets. Assuming you have masking on the piece being cut, and also have a layer of masking on the guide.

Your source image would be aligned on a 12x20 art board in the SVG file as a series of layers.

Each layer would be aligned such that when the material is pushed through the right amount, the next layer is correctly positioned.

Now, for the pushing through the right amount… at the very top edge of the design, have a low-power score that will only mark the masking. Make it a line that marks both the edge of the material and the edge of the guide. This is your top registration mark.

Next, at the bottom of each panel, including the top one, again have a bottom registration mark. This one doesn’t need to go out to the guide.

Since both registration marks were marked by the laser, there is no guessing on camera alignment.

This has some great tips, so I’m moving it to “Tips & Tricks” and updating the title.

If the camera is used each time to register on a + marked in the same reference area on the workpiece for each section, then the camera offset would be the same in each case and alignment correct relative to each other. No?

That is good in theory, and eventually it should work like that in practice.

However, at this time, it has been observed by multiple people that after performing a print, the magenta outline showing where things will print can be offset–we believe it may be that the camera placement part of the GFUI is forgetting the material height. Because of this bug, trying to align the next step using the camera is likely to not be accurate. However, running a subsequent operation of the print will accurately align with what has already been printed.

Therefore, until the camera accuracy work is finished, we will be better off using alignment methods that rely upon things that have been printed in the previous passes.

TL;DR In time you can use the camera for everything. That time is not now.

Good to know. Thanks

This is one of those major things that needs to be resolved sooner, rather than later. It effectively neuters the pro model entirely.

Unless you use established CNC indexing techniques.

But if by “neuter” you mean “it won’t do what I want automatically and I don’t want to have to spend a few minutes more in design & processing like everyone else does” then I guess you’re right until the software is finished.

Instead of having to bandaid your files and materials with alignment markers. Would it not be better that the GF folks get this alignment problem resolved once and for all. I mean this is the heart of the system and is totally unusable for my designs which exceed 30" in length. The pass through option was the entire reason why I purchased the Pro.

The other day I ran a job and did not set the power correctly being a new user. Unfortunately, the UI does not have the option to simply repeat a cut with setting changes. I had not moved the material but did open the lid to check. This caused the cam to rescan the bed image. So without moving anything in the GF or on the screen I pressed the print button. The cut was totally off and not anywhere close to the first cut. This is not acceptable after two years plus of development.!!

After reading a lot of threads. The vast majority of people seem to roll over and just accept the fact that the combination of SW/HW is not anywhere near completed for basic operations that had been spoken about in the pre and post sales a couple of years back.

It seems that many are willing to just kluge around the issues just like in this thread. Really folks this is not what we bought in to. Its time we start demanding what that base and required features are fixed and in short order. This sucker needs to work as advertised.

Guessing I don’t understand. Should not matter if you open the lid or not. As long as you don’t touch your design placement or move the material the cuts and engraves should be exactly where the first ones were. It is on my machine. I can process a file, change the settings and process the design exactly over the first one. Something happened for you not to be able to do that.

Yes the preview image might be off but the cuts/engraves are dead on. Sounds like you are having a different issue than the one you are complaining about.

After reading your response I just did a quick test. Using the three circles. Cut one… Lifted lid did not move anything
Cut two… Even though the screen alignment image shifted the material did cut bang on the first cut. Maybe they fixed something? Third none cut simply lifted lid then grabbed screen image.

Well, Im so glad you called me on this one. But based on the bed image shifting, some jobs will simply not work. Unless one leaves a 3/8" or so gap between secondary cuts. Its obvious that we can not rely at this point on the bed/material image to be used for any kind of accurate alignment.

I need to cut wing ribs which are over 36" long. These have to be exact due to high speed wing load etc. Even being 1/16" off is not acceptable. This is exactly the type of thing that the Pass through port is designed for. I guess for the general hobbyist a little drift would be acceptable?

BTW I was not complaining but stating a fact. 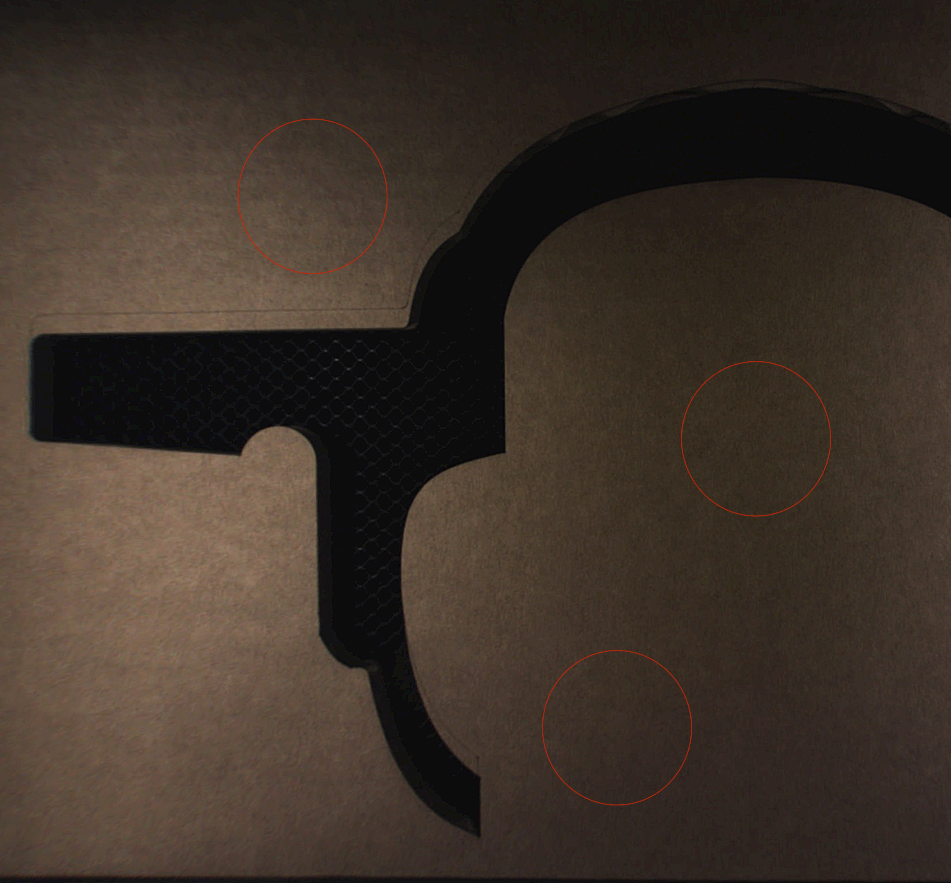 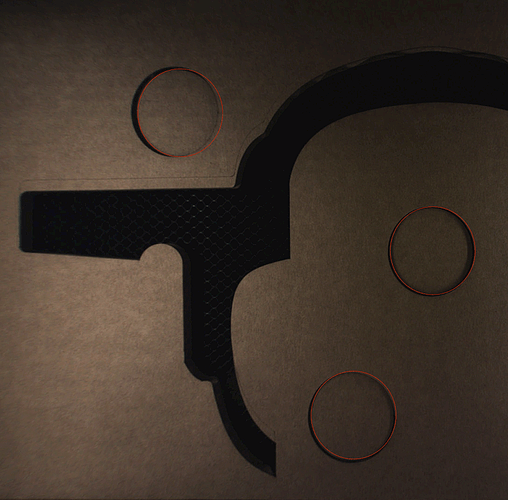 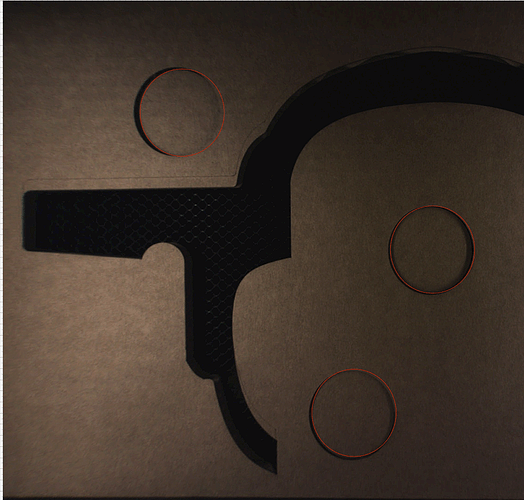 Maybe they fixed something?

It has worked that way since the first PRUs went out. Everyone who has thought it didn’t work when they went back & followed the steps you followed found out that it worked for them too.

Now it is remotely possible that it works in some folks machines but not all and when someone complains one of the GF elves fixes that machine from the cloud. That’s another explanation.

I need to cut wing ribs which are over 36" long. These have to be exact due to high speed wing load etc. Even being 1/16" off is not acceptable.

It is doable. As you noted it is not automatic as advertised but then you accepted a beta software product where it was specifically called out that the auto alignment feature has not yet been implemented.

You can do it just like all of us in the CNC and non-GF laser world have been doing for years - index your design and material. Check out YouTube for Shopbot’s video on how to do it (it’s with a CNC but the principle is the same).

Or you can continue to point out that the software does not do what it says it does not do but that it should because it’s been a long time. That doesn’t get the feature implemented any faster or your long parts made.

Is there a tutorial for

that shows how to index your file and material to do this? I watched a few Shopbot videos and I didn’t see the information you suggested and wasted a lot of time learning about a tool that I don’t have.

bed sides. As you move the piece up you align the next set of markers. I would like to think that you could align the piece with the camera, but that doesn’t seem ready. I had suggested putting + marks and aligning those to previews in the GFUI and whoever responded said that this isn’t accurate enough.