To buy a used Carvewright

It’s in an area I’ll be in already.
Asking is 700$.
It’s at a woodworking shop.
12 hours cutting.
Craftsman label.
Comes with some bits.

Some research says it’ll be a lot like GF. Current owner will need receipt and serial to release it from their account and only a basic software package can come to me, like gf’s software addons are account specific.
I’ve asked for a demo when I come to look. Says he’ll see about having one of the engineer guys there to work it.

I did read on one of the forums about someone who just took over a user account and just changed all the info(except username which is unchangable) thusly keeping access to all the software addons purchased. Something about (external)vector support is an addon?

Like gf, there’s a shipping box/crate they’re supposed to hold onto.

I know there are a few owners around here. Is this worth it with/without the software? Anything else to look for/at/ask about?

I saw years back, A, B, C style machines and upgrade paths to C but they were like 2012 threads. Nothing newer.

Any and all thoughts welcome here. Going to look Saturday evening.

I had a friend who had 4 of them! One to run and the other for spare parts! He sold all 4 of the machines for $400 a few years ago and bought a actual CNC machine.
I don’t know anyone who has not had problems keeping one running. They just don’t work as well as an actual machine.

When they first came out there were two companies in Canada that sold and serviced them. They both stopped doing that fairly early on for what ever reason. Now they have to go to Texas if they need servicing. (Ain’t going to happen!)
I bought one of the first series and I did make a lot of amazing things with it. I also did run into trouble that I fiddled with for about 3 years off and on until I finally found a really simple fix. My biggest complaint is the mechanism that holds the material down. It is a hand crank that can actually skip teeth in the gearing if you over crank it. This will end up putting more pressure on one side of the work piece than the other and cause the bit to dig deeper on one side. That also can be fixed at home but it’s not ideal. The original belt that came with the machine was sandpaper and eventually had to be replaced but that’s fairly easy and I think now they all come with the new style belt which is rubber. They have also changed the chuck system over the years to a simpler design which is something I did as well. You can also purchase a scanning probe that allows you to scan an already 3d object to create the program to duplicate that. It is good to a depth of roughly 1" I think. The only thing I dislike about that is it takes a really long time to scan anything. The machine is very noisy (as expected I guess) as well as very dusty. The basic program that comes with it is ok but doesn’t give you centerline which is something nice if you’re doing signs. There is a bit of a learning curve of course but the design software is pretty good in my opinion. There is virtually no limit to the length of material you put in it as long as it’s well supported and the machine can drag it through. It has a pretty strong motor and I’ve run Sheets of 1/2" MDF 12" wide and 80" long through it no problem. The max width is 14". For smaller stuff (because it has to be kept under the rollers) you have to make yourself a ‘sled’. You screw your board to that and the machine measures the sled thus keeping your work centered under the rollers.
Having said all this, I actually haven’t used it in about a year. After I figured out my problem with it I made a few cribbage boards and haven’t touched it since. It is really good for drilling all those holes in cribbage boards but designing them is a chore. Maybe the newer software would make that easier? I think mine is quite out of date by now.

The ones my friend had, 2 wer sold by Sears. He always complainde about trying to design something and then cut it out. I believe the system used cartridges that hat the program on them. I really don’t think I would pay anywhere near $700. He sold all 4 machines for $400 and was happy to get that. That was 5 years ago.

Yeah you design your project in the software then upload it onto a card which has to be inserted into the machine. Mind you mine is a really old version so perhaps now they have direct connect to a computer? Not sure about that but I wouldn’t want my laptop out in my shop while that thing is running anyway.
Edit: Just looked it up and they still use the same memory card: 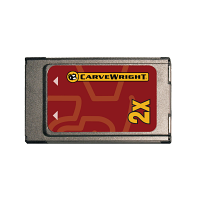 My decision to buy my 2nd 3d-printer was significantly based on the fact it used an SD card. I had spent months on trying to get a Ras-Pi setup to run my first printer (Solidoodle) instead of having a laptop hooked up to it.

I saw all that years back when looking for something to get. Eventually ended up with the gf preorder. But all reviews seem to have died off by 2013. And there are plenty of gf complaints out there too. Especially after they get deep cleaned. But we know their basically okay. Makes me wonder about the these also.

Comparing to GF isn’t quite the same as nothing has changed. Carvewright may well have.

If it’s well cared for it’s just as good as a GF. Both have their idiosyncrasies. Just like with a laser it requires a learning curve.

Both have their idiosyncrasies.

This is what I’ve figured. I’ll probably try and talk them down to 5. He’s the second owner himself and as a woodwork shop, hopefully it has been. I’m probably gonna go for it.

That’s what I read. And support is not good

3 years off and on until I finally found a really simple fix.

Well, the guy never got back to me “shortly” on Friday with the serial so I didn’t pick it up.

Nope. I found some wiring that through the years had sagged just enough to catch on the work piece every now and then. Because of the design it was very difficult to see this happening. A cable tie took the weight off them and I have had no problems since.

Can you put in a different control card if you know what you are doing that is a bit more user manageable? I know nothing about the Carvewright but the brains of a CNC is the key here.

Yeah. That’s absolutely correct. The mechanics are the expensive part of the machine - gantry, steppers, spindle. There are dozens (if not 100s) of inexpensive controllers designed for 3D Printing and CNC control (these machines are very similar in terms of their general design) that would connect to the steppers and make the machine work, probably better than it does with the original controller. The picture of the memory card a few posts back dates the HW to a design from sometime between 1990 and 2000. Old technology. PCMCIA card. I’d throw it away and upgrade to something from this century.

Well to be honest it does work. I’ve never had issues with the card at all. I guess their theory is “if it ain’t broke, don’t fix it”.