I’m trying to print a sign with text and our logo on it. My goal is for it to engrave the logo and text, and cut the edge. Designs are in Inkscape. Export to PDF, because SVG ignores text.

First try: all vectors.
It breaks our logo up into every different color, so a bajillion runs that make no sense. Is there a way to select a bunch of paths with a box and group them all together? 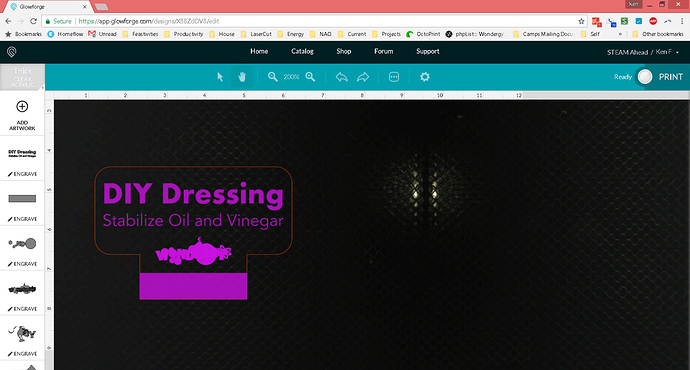 Okay, so I get creative - Second try:
Export the logo to PNG. Import it into my vector/ text drawing.
PNG has transparent background. Triple checked that. (I moved the logo onto the blue box just to prove it. In the exported images it is over nothing.) 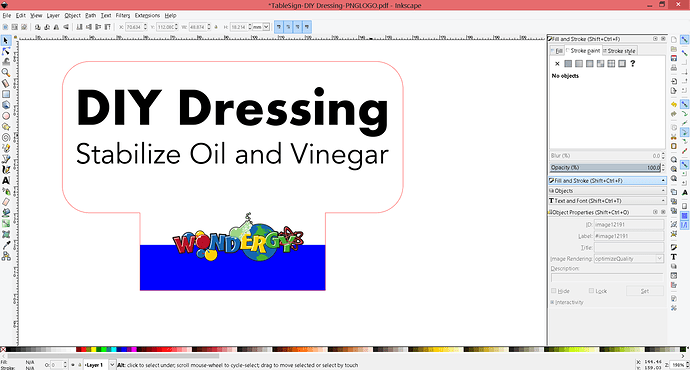 So I export to PDF and upload to GF - and here’s what I get:
A big background box. 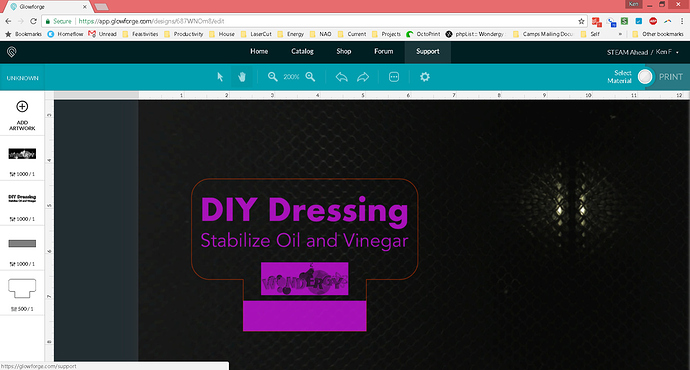 Can anyone suggest SOME way to make this work?

Update, tried it with a transparent GIF - same issue as PNG.

Can’t speak to the PNG export issue, but as far as the vectors go, the GFUI sorts vectors into operations by color, so all of those groups you’re seeing are all of the different colors in your image. So the black text is grouped together, the blue box is by itself, the red is together, etc. Looks bonkers but makes sense. And, actually, it may work well for what you want to do — if you want to vector engrave your color image but not lose clarity you’re going to need to manually set different engrave levels for the different groups.

Probably easier to rasterize the image and run photo engrave on it — but there you run into your export issue. Have you tried Ignore on the background box layer? Might be an easy workaround.

I would combine different parts then render it as an image… For example, I would leave the base outline as it is since it cuts she shape out, but everything in the shape I would group and render as an image. When you put the SVG through,m the “image” will have a frame around it in the GFUI, but just ignore that layer. You’d end up with 1 image to engrave, and 1 path to cut.

In Inkscape you can select your text and ‘Path/Object to Path’ to convert the text so it works in an SVG. At that point it isn’t editable text anymore.

Is there a way to select a bunch of paths with a box and group them all together?

In Inkscape, you can ‘Edit/select same/color’ then ‘Path/Combine’ to group all the same colors into a single operation.
If you could zip your file and drop it here someone could look at it and help.

Select all of your Inkscape vectors with the exception of the outside cutline (you want that one to stay a vector to cut, so hide it or move it to a different layer and temporarily turn it off) and with the rest of them selected, go to Edit > Make Bitmap Copy. (That rasterizes the vectors and they will become one image.)

The bitmap will appear right over the top of the original vectors though, so you need to hide it and delete all of the original stuff behind it. Then show it again along with the hidden cutline, and the file is ready to save as an SVG.

So I export to PDF and upload to GF - and here’s what I get:

In my experience the Glowforge does not interpret transparent bitmaps correctly in PDFs. (Transparent areas are treated like black.)

Export to SVG instead. (Although you’ll have to convert your text to paths.)

If you are using a raster engrave, just use a perfect white background. The laser will just skip over any area that’s perfectly white.

I would also suggest converting your logo to a gray scale image. It’ll give you a better sense of how the logo will look engraved and at what depths the engrave will be.