There’s an old legend: an engineer wanted to teach his kids about programming, and designed a board game to do it. Then he took to crowdfunding to produce it, and, in coming up with premium versions for stretch goals, started investigating laser cutters. And then he found that the world was short on hobbyist-friendly laser cutters, and started a company to change that. Whatever happened to them?

I backed the Kickstarter version way back in 2013 as a gift to my older child, then a preschooler. He never got into it much (nor board games in general), but younger sister is big into board games of all kinds now, and Robot Turtles is her latest favorite. 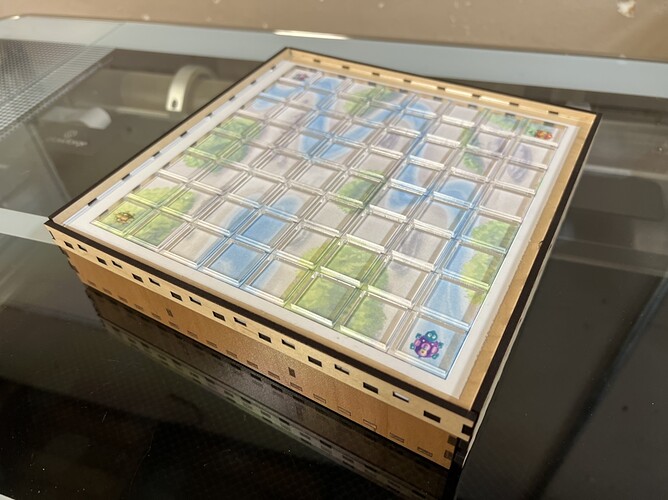 After one too many times accidentally scattering cardboard tokens all over the table, and a recent cross-country rail trip full of evening games, I decided to try applying some ideas from the “travel” versions of commercial games. 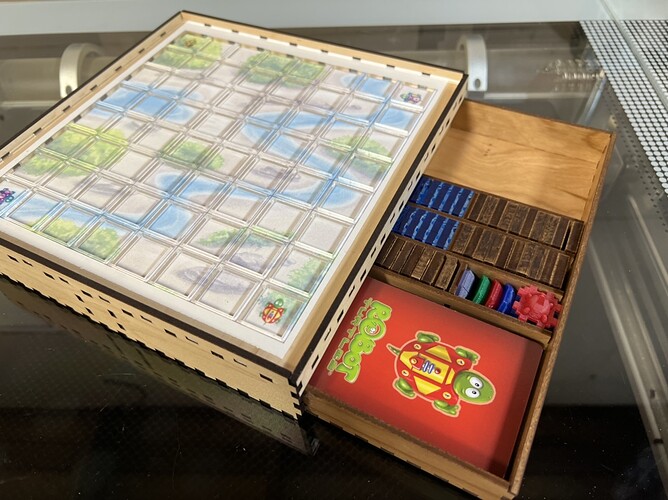 There’s a sturdy wood box, with drawers on both sides The drawers have little tabs on the back that fit just snugly enough into the internal walls of the box, so they stay shut, and high back walls, so they don’t accidentally get separated from the box. One drawer has room for three decks of cards; the other two decks and all the tokens. And there’s a clear acrylic grid on top, so the tokens stay in place during play. (The color board design is printed on sticker paper, stuck to the plywood top of the box underneath the acrylic.)

Here’s a closer look at some tokens: the gem and turtle are my first attempts at designing something for 3D Engrave on 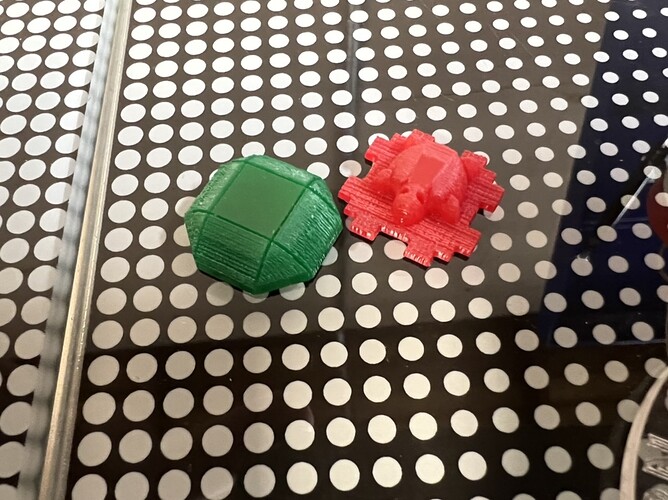 The solid wall and sokoban crate tokens are

thick plywood, and the ice wall is from TAP Plastics because 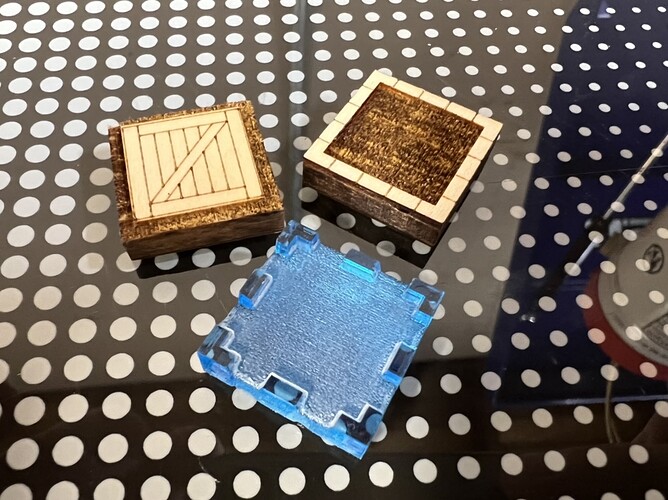 Why the funny shape on the turtle token? Well, in the original game you can flip an ice wall token to leave a puddle after a turtle melts it with their laser. In this version, you can start with the ice walls engraved side down, and flip them when melted… and then the turtle piece fits into the castle-wall pattern on top. 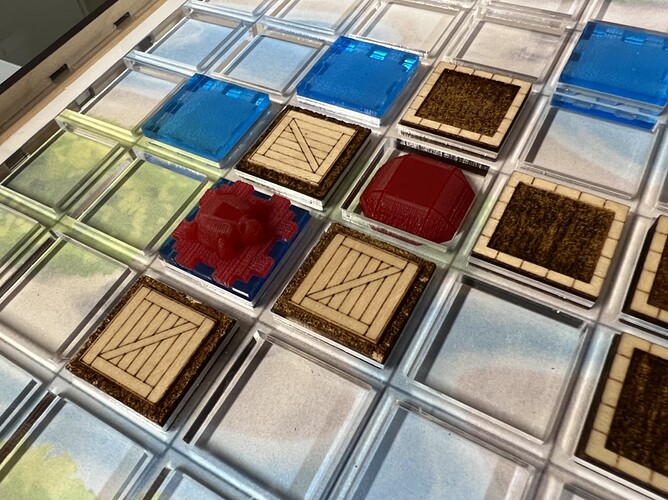 So, why is this just a prototype? For one thing, a design with such relevant history in this community ought to be shared, and selling it would be dubious, so I’ll be posting it in Free Laser Designs once I’ve refined it a bit. For another… there’s definitely some refinement needed.

A quick journal of lessons learned and planned improvements:

One more thing — you might have noticed above that there’s room in this set for five decks of cards, but Robot Turtles only comes with four.

The fifth deck is yet to be made: For a “travel” version of the game, one can’t be generating mazes online if one is traveling beyond cell signal, and one might not have the patience or inspiration to design mazes on the fly. But a deck of cards could hold lots of maze ideas!

This could be a good part for some community involvement! (I’m designing and playtesting some mazes, but it’s slow going.) What are your favorite Robot Turtles mazes? Any version — with or without ice walls, solid walls, and crates, for one, two, three, or four turtles.

You can design mazes here, but it doesn’t look like the link sharing function works. Post screenshots, maybe? I’ll include print and cut files for a premade-mazes deck alongside the Free Laser Designs version of the game.

Where were you when I was a kid?

I had to “reverse engineer” Space Invaders into assembly on a ZX81 - and type it in every time I wanted to play it.

This is fantastic! We have Robot Turtles, but my kids were maybe a bit too old for it when we got it. Or we’d already drilled coding logic into their heads by that point.

This is amazing. I’ve never played it but your travel game is so cool!

Wow. We have robot turtles and I didn’t realize its connection to the

Thanks so much for sharing this!

I’ve never heard of Robot Turtles, so have no idea anything about it. How awesome that it inspired the creation of Glowforge! I do hope you’ll post the instructions for playing the game when you post your final design.

You can buy the commercial version of the game (and get online instructions) at robotturtles.com.

Very nice. It does make me wonder, not for the first time, how many of us GF “founders” are owners of the croudfunded Robot Turtles as well.